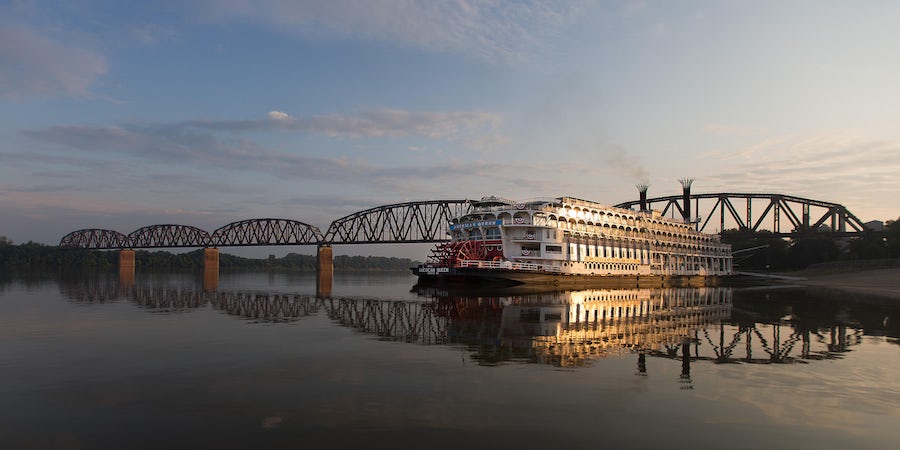 The storied Mississippi River is chronicled in a number of distinctive museums that tell such a variety of stories inspired by the river -- from marine and mammal life to a shipwreck and from great artists' interpretations of water to classic novels like "The Adventures of Tom Sawyer."

The role the storied Mississippi River plays, says Franz Neumeier, blogger and travel journalist for Steamboats.org, is unique. "Especially during the 18th and 19th century, steamboats had been key in the expansion of the United States to the west. The western rivers had been the only way of efficient transportation of passengers as well as all kinds of goods up and down the rivers before railroads or cars existed. They also played an important role in the Civil War.

"Traveling on a cruise ship that more or less imitates these boats will set you back in time a hundred years or more. It'll let you discover the South and the Midwest through the eyes of the pioneers, slow down from our hectic world and discover the country from a totally different perspective."

Whether you're cruising along the Mississippi and tributaries like the Missouri, Ohio and Tennessee Rivers, or are just a big fan of its role in U.S. history, here's our list of favorite museums along the way.

The Howard Steamboat Museum, just across the Ohio River from Louisville, is housed in the late 19th-century Romanesque Revival manse constructed for the Howard Family, then prominent steamboat-builders. Over 107 years, the shipyard that's adjacent to the house (it's still a working shipyard though no longer owned by the Howard family) produced some 3,000 vessels, including the J.M. White, among the most luxurious cotton packets to ply American inland waterways. Its preserved, intricate carvings, lavishing furnishings that are original to the house, stained glass windows and even a grand staircase, are all a good reason to pay a visit. The main reason to visit the Howard Steamboat Museum is, however, to see steamboat artifacts.

On display include pieces from the J.M. White, the Robert E. Lee, and the Natchez. It's got Delta Queen's original paddlewheel, roughly 4,000 photographs, a collection of shipbuilding tools and full ship models. There's also a pilot house and the bell from the now-scrapped Mississippi Queen.

This two-part museum showcases the history of the Mississippi from both cultural and natural perspectives. The museum, housed in the one-time Dubuque Boat & Boiler Works where many vessels were built, is located at Ice Harbor, where ships dock. Historic exhibits focus on life in this part of Eastern Iowa from the Native Indians onward, and tells the stories of the river, its music, arts and culture, and on boat-building, birding and commerce.

Families (and marine enthusiasts) flock to the National River Museum for its dynamic aquarium. Here, you'll learn about the river via a backwater marsh that shows how fish, turtles and birds survive in the wetland. A 30,000-gallon, 9-foot-tall, three-sided aquarium showcases species of the region, such as catfish and sturgeon. In the "Bayou," representing the Lower Mississippi, there's an alligator.

Boat enthusiasts shouldn't miss out on trekking through the historic, circa-1934 W.M. Black dredge boat. Check out the steam-powered engines and its pair of paddlewheels.

Sure, the Mud Island Museum has history, but its most compelling feature is the River Walk, which offers the best perspective on the mighty Muddy that we've seen. The model, laid out in lazy river style, invites you to walk along the path of the Lower Mississippi from Cairo, Illinois all the way to the Gulf of Mexico -- nearly 1,000 miles. As you wander along this smaller scale model, take the time to read the plaques detailing the history of the river, note the maps of 20 different cities that are featured and inspect the quartet of watershed walls that map drainage areas.

If there's still time, the museum's indoor galleries trace the evolution of transportation on the Mississippi River, from canoes to steamboats to modern towboats. The River Room in particular has a steam engine and paddlewheel, along with a 4,000-gallon freshwater aquarium.

In 1856, the Steamboat Arabia -- loaded with all the goods needed to outfit and furnish 16 towns in the American West -- departed from Kansas City via the Missouri River. Alas, the jinxed ship hit a snag in in the river (tree roots buried on the river bottom) that pierced the hole and sank the ship. All passengers were saved, but and the ship settled into the mud with its 200 tons of cargo still within. Here's where the Steamboat Arabia story gets interesting: Forgotten, the ship remained in the mud and the river itself -- notorious for shifting -- actually moved. It was discovered in 1987 under a farmer's field, about 45 feet underground (and a half-mile from where the Missouri River channel is today).

At the museum, there's a 10-foot section of the boat on display and a full reproduction of Arabia's main deck. There are exhibits on the successful mission to find this old ship and also to carefully excavate it. For those who are interested in American West lifestyles in the mid-19th century, much of the cargo, beautifully displayed here, was preserved by its time in the mud. The Steamboat Arabia Museum tells us that "there were 4,000 shoes and boots recovered, along with more than 3 million Indian trade beads, numerous sets of dishes and housewares, dozens of guns and knives, all manner of clothing items, and even two pre-fabricated homes."

Located on the Great River Road in Alton, which occasionally serves as a departure port for Mississippi River cruises (it's about a 40-minute drive from St. Louis), the National Great Rivers Museum is a collaboration between the U.S. Army Corps of Engineers and the Meeting of the Great Rivers Foundation. Its focus is on telling the story of the Mississippi River, of how humans and ecosystem interact, and also about the species of flora, fauna and marine life that live here. There's an aquarium that displays the river's fish. One fascinating aspect of this particular location is that the Mississippi River, according to its website, "has been used as a highway, not only by humans but by migrating waterfowl." In particular, it's a prime spot for watching eagles as they make their seasonal migrations. Another nifty aspect of the museum is its pilot house simulator, which is actually used to train river pilots, and is available here for people to get a sense of how tricky it can be to guide 1,000-ton barges under bridges and through locks.

In Kentucky's Paducah, on the Ohio River, the River Discovery Museum specializes in hands-on exhibits that allow visitors to simulate captaining a towboat, pleasure boat or even a Coast Guard buoy tender in its new Pilothouse simulator. Also check out artifacts and exhibits that showcase the history of marine life on the Ohio River.

What initially draws people to LeClaire's cozy Buffalo Bill Museum is of course its memorabilia about the native son -- an actor, soldier and folk hero. But there's appeal, too, to folks interested in riverboats, particularly its Lone Star wooden hull steam-powered paddlewheel, which is located in the center of the two-story facility. Also worth checking out are exhibits featuring the first-ever riverboat pilot, a LeClaire native, and stories tracing the culture and history of life here.

This terrific art museum, originally inspired by the collection of a wealthy Winona family, focuses on great art that's inspired by water. Collections include exhibits on traditional marine art and the Hudson River School, along with a superb representation of contemporary works and paintings from the periods of impressionism, realism and modernism. Among the internationally renowned artists on display are Claude Monet, August Renoir, Vincent Van Gogh, Georgia O'Keefe, George Bellows, Pablo Picasso and Mary Cassatt, among others. There are permanent and rotating exhibits, and don't miss its gorgeous American Prairie-inspired gardens.

The overall goal of Hannibal's Mark Twain Museum is to foster appreciation of his colorful life and his equally colorful writings. The role that the Mississippi River played in both respects is addressed on the Museum Gallery's mezzanine, which is totally dedicated to Samuel Clemens' life as a riverboat pilot, offering insights on the boats on which he worked, how he became a pilot, and even how he come up with Mark Twain, his pseudonym. A documentary at the Visitors' Interpretation Center (the museum comprises five historic buildings and two interactive museums) covers Twain's life on the river.