You may also like
Dismiss
5 Best Carnival Freedom Cruise Tips
5 Best Carnival Valor Cruise Tips
Disney Cruise vs. Carnival Cruise
Cruise Costs: Is Celebrity Cruises Good Value for Money?
Cruise Costs: Is Carnival Good Value for Money?
Meraviglia Class vs. Seaside Class on MSC Cruises
5 Reasons Why Families Will Love the Refurbished Norwegian Jewel
7 Tips for Getting the Most Out of Your OceanMedallion Experience
23 Things Cruisers Love to Complain About
5 Free Things to do on Carnival Splendor 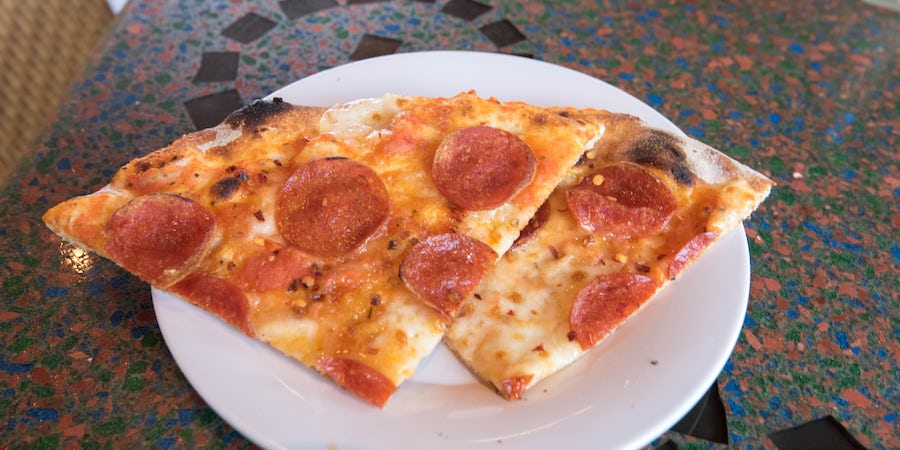 Gone are the days of cruise ship midnight buffets, and while few lines offer late-night or round-the-clock sustenance beyond room service, Carnival's Pizza Pirate does just that. Set in an open buffet area near one of the secondary pools, this eatery serves several varieties of pizza 24 hours a day.

A simple counter-service setup -- a counter and glass cases with an oven that's manned by a couple of crew members -- is generally located near seating that's also convenient to one of the pools (frequently the aft pool), so it's easy to walk over and grab a slice or two in your bathing suit between dips. While the area is almost always bustling, it's nowhere near as busy as the food areas by the main pool.

Lines are often long, wrapping around the corner at meal times and late at night, but it's worth the wait. The pizza -- some of the best we've ever had at sea -- is made fresh constantly, so you'll always get a slice that hasn't been sitting under a heat lamp. At peak times, pies are depleted nearly as quickly as they can be made.

Several kinds of pizza are available, but the most popular are the quattro formaggi (four cheese, including gorgonzola, provolone, parmesan and mozzarella with roasted garlic); margherita (tomatoes, basil and fresh mozzarella); and pepperoni. Other types featured are funghi (mushroom) and prosciutto (with roasted garlic, arugula and mozzarella); gluten-free pizza is available upon request. Caesar salad is also on the menu.

Be warned: Each slice is equivalent to about two small slices from a standard pie on land. We asked for one slice and found ourselves with two Carnival-sized slices (actually equaling about four).

You can visit the counter as many times as you like for free.

Which ships have Pizza Pirate?