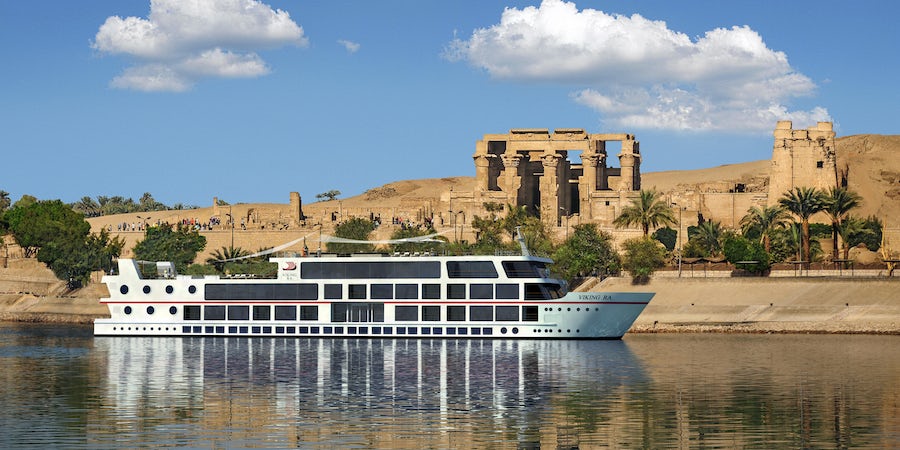 Trying to decide whether you want to sail AmaWaterways vs. Viking River Cruises is tricky. After all, both look pretty similar from the outside, both cater (and market) to North American passengers and both sail on virtually all of the world's major rivers -- they even include many of the same ports. So how do you decide? Let us help you learn more so you can choose between these two river cruise lines.

AmaWaterways and Viking are similarly priced across all cabin categories, from the lowest on up to the suites, and both offer comparable inclusions. Your cruise fare on both will include at least one shore excursion in each port; wine, beer and soda at lunch and dinner; all onboard meals; Wi-Fi; and cultural enrichment. Neither includes gratuities for crew or tour guides. Both suggest 12 euros per person per day for the crew as well as an additional fee (2.25 euros for Viking, 3 euros on AmaWaterways) for the cruise/program manager. Viking River Cruises and AmaWaterways include at least one shore excursion in every port you visit. Excursions are typically guided by local experts who know the port's culture and history well and speak English almost perfectly. Both lines also offer premium excursions, which come at an additional cost. These excursions generally are limited to small groups and take you into smaller venues or provide immersive experiences that expose passengers to a port's culture and tradition on a deeper, often hands-on, level.

Modern coaches provide the primary mode of transportation for each, though Viking's are branded with the cruise line's logo and photos of the ships or exotic locations (making them easily identifiable among the crowd), while only some of AmaWaterways' buses are branded.

Both cruise lines use a QuietVox system during excursions, where the tour guide speaks into a headset while passengers listen on receivers. This allows passengers to go at their own pace while still hearing the guide.

Choose AmaWaterways if you want more active time in ports

AmaWaterways excursions generally have three levels: a gentle-walking group, the general group and the active group. Most passengers go with the general offering, which usually combines tour buses, some walking and guided exploration of the top sites. Gentle tours are designed for those who need a slower pace or have mobility issues. These tours involve little walking, and destinations are mostly seen by bus or other vehicles. Those looking to get their hearts pumping might choose an active tour, which could include a little more mileage or climbs up stairs or other steep inclines, or the pace might simply be slightly faster.

Boats in the AmaWaterways fleet also offer bikes, which can be used in port as part of an excursion or for solo exploration. Bikers are required to wear helmets. AmaWaterways also has a partnership with Backroads, an active touring company. Select sailings include longer bike rides to -- and even between -- ports. Backroads even provides the high-end bikes for these sailings, set up for each person ahead of time based on factors like height, weight and cycling style.

Choose Viking if you want some off-the-beaten-path options

Viking River Cruises invests in finding some unique shore excursions. You might go truffle hunting in Bordeaux or cognac blending in Camus, for example. Viking also has an impressive lineup of partners, including Masterpiece Theatre, so passengers could elect to visit Highclere Castle, where "Downton Abbey" was shot, and get behind-the-scenes exclusive access as part of a cruise land extension for Paris and Normandy cruises. Viking stands at the top of the river cruise industry when it comes to fleet size. The line has 46 Longships, nearly identical boats designed to sail Europe's rivers. The average age for these boats is two years, and vessels can accommodate up to 190 passengers. Viking also has five smaller "Baby Longships," which sail the Douro River in Portugal and the Elbe River in France. Then, there are the ships in Egypt, China, Vietnam, Russia and Myanmar (Burma), which the line either owns or charters. All told, the fleet stands at 64.

AmaWaterways has 21 ships offering cruises to Europe, Vietnam, Myanmar (Burma) and Africa. The ships that sail in Europe are similarly designed and can accommodate about 164 passengers. Like Viking's Longships, most of AmaWaterways' European ships are 443 feet long, the maximum length to make it through the lock systems on Rhine and Danube cruises. Viking's Longships feature square bows, which creates space for the line's Aquavit Terrace, an alfresco spot for drinking and dining on the third deck.

Both lines sail on the Danube, Rhine, Moselle, Main, Rhone, Seine, Garonne, Elbe, Dordogne and Douro in Europe, and both offer Christmas markets cruises. Both sail the Irrawaddy River in Myanmar, and the Mekong in Vietnam and Cambodia. Viking sails on the Nile and Lake Nasser in Egypt, the Yangtze in China, and the Volga, Svir and Neva rivers along with Lake Onega and Lake Ladoga in Russia. AmaWaterways sails the Chobe River in Africa. With both lines, exotic itineraries in Asia, Russia and Africa often combine longer land tours with time on the rivers.

While Ama and Viking's European ships look similar on the outside, their cabin design and decor are quite different. Viking, whose president and founder, Torstein Hagan, is Norwegian, features comfortable, modern and minimalist styling. Color palates are subdued, relying on shades of gray, cream and steel blue along with neutral woods. Decor is punctuated by Scandinavian art (paintings of old Norwegian sailing vessels, for example).

AmaWaterways cabins are quite colorful, with stark whites contrasting bright pops of pink or red patterns. Throw pillows are elaborate, and wood and marble touches are dark. Unlike Viking's Longships, in which decor is almost identical from ship to ship, AmaWaterways' cabins feature different decorations, depending on the vessel.

Cabins for both feature similar amenities, with things like mini-fridges stocked with water (replenished daily) umbrellas, robes and veranda blankets for use during your cruise, in-room Wi-Fi and interactive TVs with free on-demand programming. Both include toiletries: Ama supplies Hydro brand shampoo, conditioner, shower gel, soap and lotion, while Viking provides Freyja amenities. Bed configuration for both lines is flexible: Two twins can be combined into one king.

Cabin categories for Viking and AmaWaterways are pretty similar and vary from a standard riverview cabin with small windows all the way to suites with French and walk-out balconies. Ama's cabins in virtually every category are slightly bigger than Viking's.

Choose AmaWaterways if you want cabins for singles or families

Several of AmaWaterways ships feature cabins for single travelers. Each of these cabins features a twin bed and space for one, perfect for solo cruisers. Two Ama ships -- Ama Viola and AmaStella -- also include several cabins that can accommodate three people (with a king-size bed along with a chair that converts into a twin bed). AmaViola and AmaStella also feature a number of connecting cabins, designed with families in mind.

Even at the lowest level, Viking's cabins include exceptional storage space, with lots of drawers and underbed space for storing suitcases. Cabins also feature great lighting, which employs dimmer switches and bedside controls. Bathrooms have heated floors, a surprising and wonderful detail, especially in the middle of the night.

Both cruise lines take the same approach to dining, with a combination of buffet and off-the-menu ordering at breakfast and lunch, then a sit-down dinner at a set time each night. Seating on both lines is open, meaning passengers can sit wherever they'd like. Soda, beer and regional wines are included at meal times, and menus source heavily from local markets and reflect the areas through which the ships sail. Passengers can bring onboard their own drinks from port as well. Viking offers a beverage package option, called the Silver Spirits package, which runs about $30 per person per day and allows passengers to drink unlimited premium wine, spirits and beer while onboard. AmaWaterways doesn't have a beverage package.

Cruisers on AmaWaterways get one dinner per cruise at The Chef's Table, an included alternative restaurant that has a set menu. Passengers are treated to a multicourse meal with unlimited wine, paired to the courses.

Choose AmaWaterways if you have allergies or dietary restrictions

While most river cruise lines, including Viking, can accommodate dietary restrictions, AmaWaterways stands out because of its clear labeling of all foods, identifying those that are gluten-free, sugar-free, low-calorie or include common allergens, such as nuts or soy. The ships even have a "gluten-free corner," where passengers can find snacks at all hours of the day.

Choose Viking if you like a casual outdoor dining option

One of the best seats in the house onboard Viking's Longships, the Aquavit Terrace beautifully combines indoor/outdoor dining with a casual feel. During the day, passengers can skip the ship's dining room for buffet dining. At night, the Aquavit Terrace serves a set menu that can be enjoyed as often as you'd like throughout your cruise. No need to dress for dinner here, and passengers don't have to show up at a set time, either.

Viking and Ama both include enrichment programs during their sailings, and the offerings are comparable. They're designed to provide more insight into the ports and destinations the ships visit. The lines might bring onboard local singers, dancers and musicians during visits to Vienna, for example, or teach passengers how to make local dishes. Talks, too, focus on history of the region, and might include scenic cruising lectures, where the speaker points out highlights as the boat sails. With either line, passengers will find plenty of room for lounging, whether outdoors on the top deck or inside in the ships' lounges. Both lines offer concierge services, books to borrow on topics like history or tourism, comfortable bars for drinks and dancing and top-deck walking tracks and giant chess boards. AmaWaterways boats feature elevators, and Viking ships have sun deck herb gardens, which chefs use daily.

Choose AmaWaterways if you want some extras

AmaWaterways boats feature small (one-room) spas, where moderately priced massages are offered, and salons along with fitness centers, which are moderately used. They also have heated swimming pools with swimup bars that are surprisingly large for a river line. Pools feature underwater stools so passengers can sit at the bar and watch the scenery go by.

Viking's sun decks offer more space, in part because the area isn't used for pools or storing bicycles. That leaves plenty of room for lounging, either in full sun or under shade. There's also space at the Aquavit Terrace.

AmaWaterways is a wonderful pick for passengers who want to be active or travel with children as well as those who want more amenities onboard. Viking is a good choice for passengers who desire adults-only vacations that include immersive port experiences.