You may also like
Dismiss
5 Best Disney Fantasy Cruise Tips
Inside vs. Balcony Cruise Cabins: A Cabin Comparison
Virtual Balconies on Royal Caribbean
10 Ways to Cruise When You're Totally Broke
Is a Larger River Cruise Ship Right for You?
How to Save Money on a Disney Cruise
How to Save Money on a Carnival Cruise
The Pros and Cons of a Port-Intensive Cruise
7 Things to Know About the Cheapest Luxury Cruise Cabins
Virtual Cabin Crawl: Symphony of the Seas Cruise Ship 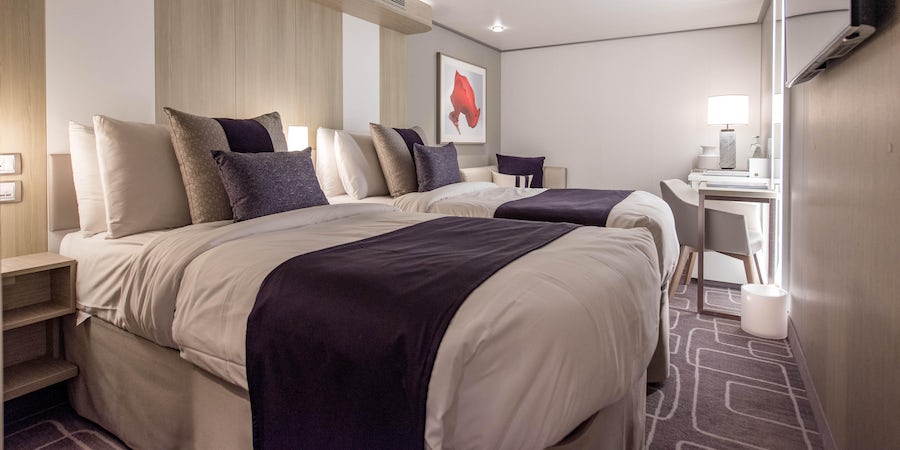 While an inside room on a cruise might not be for everyone -- the lack of windows and compact size are certainly worth weighing -- there are plenty of reasons to consider booking one.

Also known as interior cabins or rooms, inside rooms line the interior hallways aboard cruises and are often the smallest cabins on the ship. Space and storage are generally minimal and natural light can be nonexistent.

However, when you consider costs (and a host of other factors depending on your cruise style), those sacrifices can pay off. Check out the eight times that an inside cabin might just be the best bet for your next cruise vacation.

1. Inside Rooms Are Cheaper Than Almost Every Other Room on a Cruise

Let's start with the obvious: Booking an inside cabin can get you an incredible vacation for far less money. In fact, they can often be cheaper than a budget hotel room near a beach (and include plenty of perks hotels don't).

We've seen inside cabins priced from $39 per person, per night. While deals that low are reserved for special sales, you can often find interior rooms from $80 or less per person, per night. That fare includes not only your room but also food in select restaurants (including the main dining room and buffet), entertainment onboard and use of pools and water slides. If you're short on cash, but need a getaway, an inside cabin gets you access to most of the awesome amenities found on mega-ships.

2. You Plan on Spending Little Time in Your Room During Your Cruise

Many cruisers spend way more time outside of their cabins than indoors. Why? Between eating, drinking, dancing, belly laughing at comedy shows and splashing in the pool, there's enough action on a cruise to keep you outside of your room day and night. When you add in port excursions, you might just find that you're only in your room to change clothes, shower and sleep. If that sounds like you, an inside room on your cruise might be the right choice.

3. Light Sleepers May Want to Consider an Inside Room

Inside cabins are dark. Turn off the lights and you have no idea if it's the middle of the night or high noon (so long as you don't have windows overlooking the central promenade or other public areas). For light sleepers, that guaranteed darkness can be the best sleep aid in the world and may warrant considering an inside room on your cruise. This is especially the case in places like Alaska or Norway, where the sun doesn't set until the wee hours of the morning and rises not long thereafter in summer months.

Related: 12 Things You Shouldn't Do in Your Cruise Cabin

4. Saving Money on an Inside Cabin Lets You Spend More on Specialty Dining and Other Extras

Remember when we told you inside rooms on cruises are cheaper than other rooms? That means you'll have more cash left over for indulgences like spa treatments, shore excursions and specialty dining.

Downsizing from a balcony cabin to an inside room can free up hundreds of dollars you can use to splurge on that couples massage or flightseeing helicopter tour.

On a typical seven-night Caribbean sailing on a mainstream cruise line, you can save an average of $350 to $400 per person per night when comparing inside cabins to balcony cabins. Perhaps, you'd prefer to use the money to fund your poker habit at the onboard casino or keep the wine flowing at dinner. Spend money on the most important parts of your vacation -- and if you skimp on the cabin, that's A-OK.

5. Not All Inside Rooms Lack a View

Royal Caribbean has inside cabins with a view -- just not always of the ocean. Several of its ships have rooms that overlook the Royal Promenade or other open public areas of the ship.

You may also find interior rooms with virtual balconies -- floor-to-ceiling LED screens that display live footage from outside the ship, creating the sensation that you're looking out a window.

Disney Dream and Fantasy offer similar inside rooms with Magical Portholes -- small, round video screens that show exterior views as would a real porthole window. And on Carnival, some cabins labeled as inside actually have porthole windows for natural daylight (if not wide open seas).

Related: Check Out the Virtual Balconies on Royal Caribbean

Fact: Most cruise lines charge what's called a single supplement to a solo cruiser staying in cabins built for two. If you want to avoid that often hefty charge, you should make sure your cruise offers cabins for one. While solo cabins with a view or balcony do exist, they're tough to get and the majority of solo rooms are interior. Norwegian's popular Studio cabins -- with their mod designs and mood lighting -- are usually interior (though they do have windows that look out into the corridor).

And even if a true solo cabin sans single supplement isn't available, booking a standard interior room will save you money because the solo supplement is a percentage of the cruise fare. As we've told you, inside cabins are cheaper.

7. Families Can Use Interior Rooms to Save Money on Multiple Room Bookings

Most mainstream lines allow families to book extra rooms across the hall from parents. It’s a money-saving tactic that also allows the kids to feel a little more independent than standard adjoining rooms. This approach works even if parents decide to split up between the kids for sleeping arrangements. Booking one balcony and one or more interior staterooms across the hall allows everyone to enjoy the balcony room during the daytime and split up at night – with bonus bathrooms.

Related: The Best Cruises for Kids

8. Inside Cabins Come in Quirky Configurations That Just Might Work for Your Cruise Style

Carnival's 1A cabins are a grab bag of quirky cabin designs. They may share a category and be considered "insides," but that's where the similarity ends. Some have two standard beds (that can combine into a queen), while others have one bed and either a sofa bed or a pulldown bunk bed.

Views can range from none to portholes or even picture windows. If you want something out of the ordinary for a low price (these cabins are favored by solo travelers, too), these inside cabins might be a good choice for you.