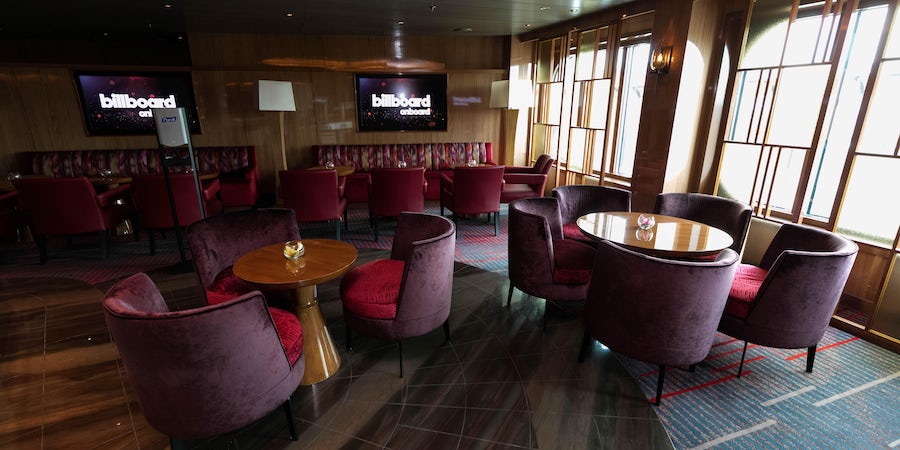 Billboard Onboard on Holland America

If you want to rock out to chart-topping songs from the '50s to the present, Holland America's Billboard Onboard is the place to be. Here, two pianists bang out the hits late into the night, every night. Expect lots of sing-alongs, requests and a guaranteed fun time in this venue, which makes up part of the Music Walk.

Holland America Line has formed a partnership with legendary charts compiler, Billboard, and has opened a dedicated spot onboard several ships to showcase hits throughout the decades. The venue makes up one-third of its Music Walk (along with Lincoln Center Stage and BB King's Blues Club).

The room is arranged with two grand pianos at its center, with a bar set up around the pianos to allow you to get up close and personal with the two pianists who perform nightly. It's a nice touch; a nod to a dive bar with a resident piano man (and indeed, on most nights you can hear Billy Joel's "Piano Man"). You might be tempted to describe the pianos as "dueling," but they're not really; they play in unison, complementing each other. The musicians double as comedians between songs.

Expect a largely freeform performance, mainly dictated by the audience and what mood they -- and the pianists -- are in. You can scribble your requests down and slip them to the pianists, or just shout them out. Don't be shy: This venue thrives on audience participation. You can even take the mic and sing, if the pianists are feeling generous, and you can hold a tune.

The songs are taken from the Billboard charts throughout the years, but to be honest, the pianists play whatever is in their repertoire. Expect plenty of sing-along classics, such as "Don't Stop Believing," "Livin' on a Prayer" and "Purple Rain." You'll hear lots of Queen and Elton John, too.

Billboard Onboard offers music every night; check your daily planner for exact times. This venue also plays host to karaoke earlier in the evening.

There is no cover charge for Billboard Onboard, though alcoholic beverages will cost you.

Billboard Onboard is found on the following ships:

See photos of the Billboard Onboard on Holland America's Koningsdam.