You may also like
Dismiss
St. Thomas/St. John Beach Guide
Hate Caribbean Cruise Crowds? Avoid the Masses in Popular Ports
The World's Best Beaches to Visit on a Cruise
The Beach Club at Bimini: What You Can Expect From Virgin Voyages' Private Experience Ashore
Best Shore Excursions in 30 South Pacific Ports
10 Things You Should Never Do on a Cruise Line Private Island
10 Best Cruise Destinations for Hot Air Balloon Rides
9 Best Beaches in Puerto Rico for Cruisers
7 Best Beaches in Nassau for Cruisers
Cruise Beach Bars We Miss in the Caribbean 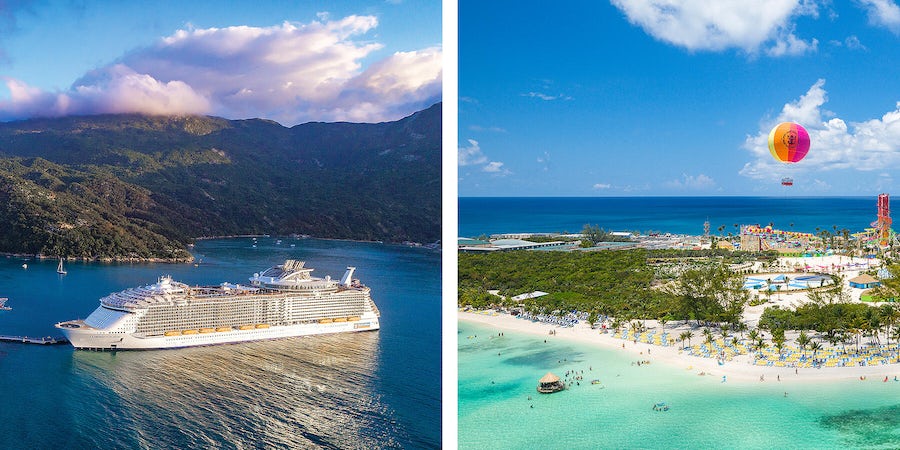 If you're sailing on Royal Caribbean from Florida and other East Coast ports, there's a high likelihood that you'll be on cruise to Labadee or Perfect Day at CocoCay on your itinerary. That's right: While many cruise lines have one private island, Royal Caribbean has two -- one in the Bahamas and one along Haiti's beautiful northern coast.

But the experience at both Royal Caribbean private islands couldn't be more different. From high-octane slides to tranquil beaches and thrilling zip lines, there's a lot to see and do at both. How can you tell the difference between the islands when you're trying to choose the best itinerary for your vacation? Read on for our breakdown of Labadee vs. CocoCay, so you know exactly what to expect on your cruise.

Labadee vs. CocoCay: What Are the Similarities?

Let's start with Royal Caribbean's private island basics: Both Labadee and Perfect Day at CocoCay are a beach-lovers paradise. Both are rings by perfect, calm turquoise water lapping at white-sand beaches. You'll find loungers galore and there's generally food and drink within reach almost anywhere you decide to park yourself on the sand.

Labadee is equipped with a pier, which means visiting ships can dock right at the island. CocoCay, once a tender port, debuted a pier in 2019 so that more ships are now able to dock and guests can walk or take a shuttle to the island itself. CocoCay and Labadee are both leased (rather than owned) by Royal Caribbean from their respective countries, The Bahamas and Haiti.

Related: Why a 5-Night Royal Caribbean Private Island Cruise Is Just What You Need: Live from Mariner of the Seas

Both Labadee and CocoCay feature water sports, cabana rentals, souvenir markets selling local handicrafts, high-octane extras and water parks (though the differences between the latter are significant). You'll find bars and all-you-can-eat barbecue buffets. On both islands, you can pay for shore excursions, water sports equipment rentals and alcoholic beverages with your onboard account.

Bars are another area in which the islands compare -- you'll find plenty (at least five apiece) across CocoCay and Labadee. All bars on both islands sell the usual variety of mixed and frozen drinks, as well as beer. Most dining options and all drinks on both private islands are covered by Royal Caribbean's food and beverages packages that you've booked on your ship.

Related: Why a 5-Night Royal Caribbean Private Island Cruise Is Just What You Need: Live from Mariner of the Seas

What Makes Labadee and CocoCay Different?

As we already told you, the location of Royal Caribbean's private islands is the first major difference. CocoCay is found in the Bahamas' Berry Islands between Freeport and Nassau while Labadee is part of Haiti, located in the Eastern Caribbean. Labadee is also nearly twice the size of CocoCay, featuring five beaches to CocoCay's three (though not all can be used for swimming).

Related: Why a 5-Night Private Island Itinerary Is for You

In addition to their geographical differences, the types of activities they offer vary as well. Perfect Day at CocoCay feels much livelier, with a subtle theme park vibe in spots. Yes, there are quiet beaches -- including South Beach and Chill Island -- but the centerpiece of the island is its massive water park. There you'll find the tallest waterslide in North America (and several others), the largest freshwater pool in the Caribbean, kid-friendly splash pools, a giant wave pool and plenty of other attractions. CocoCay also includes an exclusive area called Coco Beach Club, which comes with an extra fee, but includes beachside service, private cabanas, and overwater bungalows plus high-end beachside dining and a lush, chilled out vibe.

Labadee feels less like a theme park, with beaches and relaxation front and center. These are generally the focus of Royal Caribbean guests at Labadee, and its easy enough to have a drink in hand at all times. While thrills are a bit less obvious here, kayaking, an alpine slide and the largest overwater zipline can also be booked for a fee at Labadee.

Adventure Ocean kids' club offers activities for children on both islands, but while locations vary on Labadee, CocoCay has its own dedicated outpost as well as a splash park for little ones and Captain Jill's Galleon, a pirate ships replica with plenty of water features.

The Bottom Line: Labadee vs. CocoCay

Related: Your Guide to CocoCay Cabanas

Why You Should Pick Labadee: If you're after beach, beach and more beach, Labadee is for you. The relaxed vibe is perfect for those looking to unwind with cocktails. The option for thrills is also here, though less obviously than at Perfect Day, with Dragon's Breath and Dragon's Flight zip lines as well as the Dragon's Tail alpine coaster.

Insider Secret About Labadee and CocoCay: Lately, Royal Caribbean has been running shorter itineraries that include both private islands. Check around for these itineraries if you're after a simple cruise vacation that allows you to maximize your onboard food and drink packages on dry land.