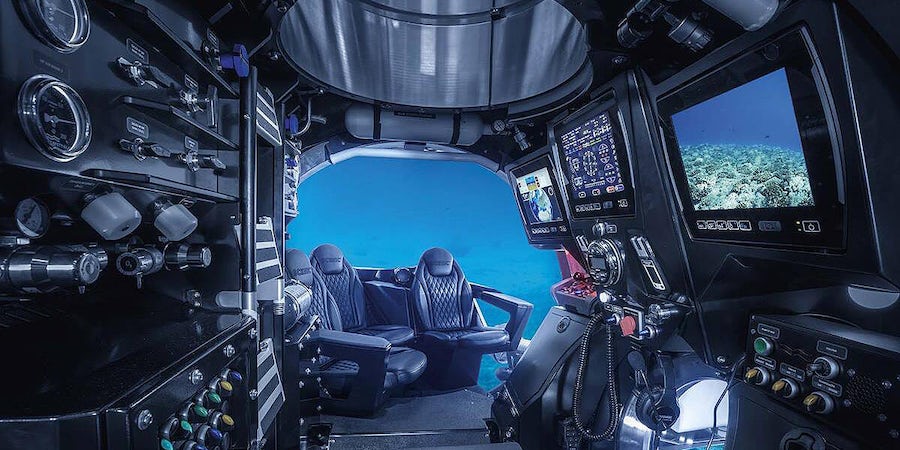 Under the Sea: Cruise Ships with Submarines

Today's luxury expedition cruise ships have gadgets and gizmos aplenty, including four cruise ships with submarines. Holding from two to six cruise passengers, these subs can dive almost as far as 1,000 feet below sea level and can offer up to nearly 360-degree views of undersea scenery few ever get to see. If you'd like to be part of that world, here's what you need to know about the submarines on these four cruise ships.

Scenic's first yacht-style expedition ship has a submarine called Scenic Neptune. The six-passenger sub (a U-Boat Worx Cruise Sub 7) is capable of diving up to 984 feet below sea level. Seats rotate 280 degrees and participants can take in the underwater view from every direction through the dual acrylic sphere windows. Tours in the sub -- up to eight a day -- cost extra (several hundred dollars) and last 20 or 40 minutes. (If you're prefer to head up in the air, Scenic Eclipse also has two helicopters.)

Related: 'A Cruise Destination Like No Other:' Live From Scenic Eclipse in Saudi Arabia

When it debuted in 2015, Crystal Esprit -- Crystal Cruises' 62-passenger luxury yacht -- introduced the world to the concept of a submarine on a cruise ship. Esprit's sub (a C-Explorer 3) can hold three people (the operator and two passengers), descend about 1,000 feet and reach speeds of up to 3 knots. The sub also has a 360-degree Plexiglas hull perfect for reef and marine life spotting. Dives are 20 to 30 minutes long and cost upward of $500.

Seabourn Venture, the first expedition-specific vessel for Seabourn Cruises, will carry two of the same submarines that Scenic Eclipse has when it launches June 2021, but these will be modified slightly for Seabourn. Just like on Eclipse, the battery-powered subs will carry six passengers, plus a pilot, and will be able to dive to depths of up to 984 feet below sea level while offering 280-degree unobstructed views.

However, these subs will also be outfitted with special technology, including a 4k underwater video camera that will record the seas outside and an internal video recording system that will capture and film passenger reactions to their surroundings. A six-function manipulator arm capable of lifting up to 70 pounds will also be mounted on the side of the sub in case the pilot wants to move or inspect something. Subs will be operated multiple times per day in regions around the world where conditions are suitable; dives will cost extra.

When it launches in August 2020, Crystal Endeavor will be the second Crystal cruise ship with a submarine. The first ship in the line's expedition fleet, Endeavor will offer a submersible larger than the one on Esprit, carrying six passengers (plus the pilot). No further information about the submarine has been released yet.