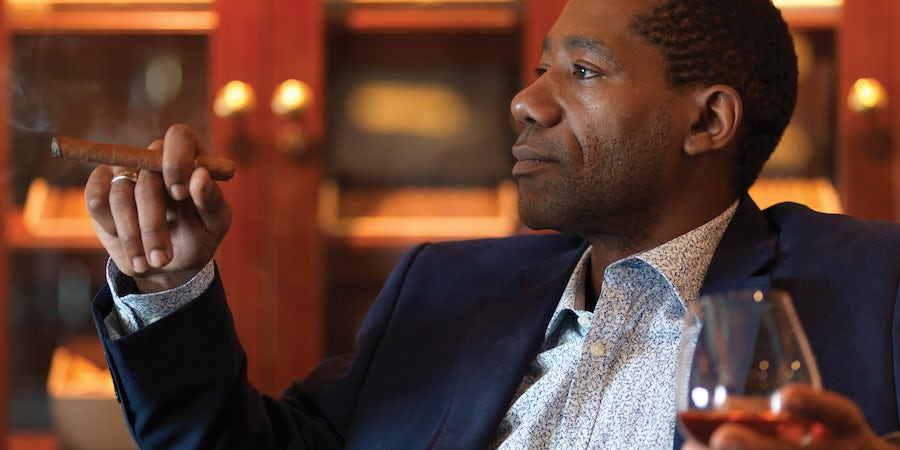 Whether you're a smoker or hate to be around cigarettes and cigars, you might be wondering: Can you smoke on a cruise?

The answer is yes. All cruise ships allow smoking in certain areas, which are typically designated in outdoor smoking zones and sometimes in casinos, nightclubs, cigar lounges and cabin balconies (depending on the cruise line). The rest of the ship is firmly nonsmoking, however, and that includes all staterooms, restaurants and theaters.

Note that for safety and health reasons, cruise lines take these policies seriously: You can be fined -- or even disembarked -- for smoking on cruise ships in prohibited areas.

If you're looking to light up on your trip, the cruise lines with the least restrictive smoking policies allow passengers to smoke on their cabin balconies. These include Costa Cruises and Fred. Olsen Cruise Lines. (Fred. Olsen also permits passengers to use vaporless e-cigarettes in their staterooms.) Carnival Cruise Line and Princess Cruises don't permit smoking on cabin balconies but do generally allow it in sections of their ships’ nightclubs and casinos.

If you're a nonsmoker, however, and would prefer to sail on a nearly smoke-free ship, the lines with the most restrictive policies include Azamara, Celebrity, Disney, P&O, Ponant, SeaDream, Viking Ocean and Windstar -- each of these companies only permit smoking in limited outdoor areas on deck.

Read on to find the smoking policies for major cruise lines.

Smoking is permitted on the portside forward section of the pool deck, in a clearly marked area.

Smoking is only permitted in designated outdoor areas, which vary by ship.

Smoking is permitted in designated spaces on the open decks, on private balconies and in the Cigar Lounge.

The only places indoor smoking is permitted are the Connoisseur Club smoking lounge (aboard Crystal Mozart, Crystal Serenity and Crystal Symphony) and the VIP area of the casino during play (though the casino excludes cigar and pipe smoking). A number of outdoor areas are designated for smoking on deck, including near the pool area. There is one outdoor section for smoking on the smaller Crystal Esprit yacht, on Deck 5's portside aft.

Smoking, including smoking of e-cigarettes, is only permitted in designated areas of the open decks. Churchill's Cigar Lounge is the one exception to this, but for cigars and pipes only.

Passengers are able to smoke on cabin balconies (except for Deck 7 terrace balconies on Black Watch and Boudicca) and in specially designated areas on open-air decks. Vaporless e-cigarettes may additionally be used in staterooms.

Smoking is permitted on the starboard side of the Sea View Bar/Pool (port side on Koningsdam, Prinsendam and Nieuw Statendam); the Sports Deck forward and starboard side of the Crow's Nest aft on Maasdam, Veendam, Volendam, Zaandam, Rotterdam and Amsterdam; the Oak Room on Noordam (including cigars and pipes); and the Sun Bar on Koningsdam and Nieuw Statendam. Smoking is allowed in all casinos (apart from special nonsmoking days), except Zuiderdam, Oosterdam, Westerdam and Eurodam, which have entirely smoke-free casinos.

Cigar and pipe smoking is only allowed on the designated outside deck areas apart from the Oak Room. E-cigarettes are allowed in designated smoking areas, as well as inside passenger staterooms (but not on balconies).

Policies and designated smoking zones vary by ship, but it's permitted on certain areas of the outside decks and sometimes in indoor areas like the casinos, or if the ship offers it, in the cigar lounge (like on MSC Divina, for example).

Smoking is permitted in designated areas on open decks, in casinos (for players only) and in cigar bars. On The Waterfront aboard Norwegian Getaway and Norwegian Breakaway, smoking is allowed on the starboard side excluding food-service areas. Garden Villa passengers are also allowed to smoke in their private gardens or sun decks. Cigar and pipe smoking is allowed in cigar bars and designated smoking lounges.

Smoking is permitted only in the aft port corner of Horizons and the starboard forward section of the outdoor Pool Deck (the latter area is the sole designated spot for cigar and pipe smoking). E-cigarettes may be smoked anywhere apart from dining venues (including outside seating areas).

Passengers who wish to light up can smoke on certain designated areas of the open deck; the same rules apply for electronic cigarettes.

Ponant ships are nonsmoking apart from the specifically designated areas on the outside decks.

Cigarette smoking is only allowed in designated areas of the outdoor pool area fleetwide and within the Connoisseur Club (not found on Navigator). It's also permissible in the following public areas: Horizon Lounge (designated area outside) on Seven Seas Voyager and Seven Seas Mariner and Galileo's on Seven Seas Navigator.

On all Royal Caribbean ships, smoking (including cigars and pipes) is permitted in designated areas of the open decks. (For most ships, this will be on the starboard side; on Oasis-class ships, it's on the port side.) Casino Royale allows smoking (with the exception of voyages departing from Australia and the U.K.) but has designated nonsmoking areas as well on all ships -- apart from those departing from China and Hong Kong. Ships sailing from Chinese homeports also offer one indoor smoking venue apiece. Cigar and pipe smoking is additionally permitted in cigar bars, which can be found on Freedom-class and Voyager-class ships.

Smoking is permitted in designated outdoor areas on deck.

Smoking -- including cigarettes, cigars, e-cigarettes and pipes -- is permitted in the Connoisseur's Corner, at select tables outside the Panorama Lounge and the Pool Bar, and at designated outside areas on the open deck.

Viking allows smoking in just one outdoor area, on the starboard side of Deck 8.

Smoking is only allowed in designated areas on the open decks.