You may also like
Dismiss
Laughs at Sea: Cruise Ship Comedy Clubs
5 Best Carnival Freedom Cruise Tips
10 Reasons Why Carnival Splendor Is the Cruise Ship for You
Is Carnival Vista the Ship for You?
Carnival Breeze vs. Magic vs. Dream
What Is Fun Ship 2.0?
5 Things You'll Love About Holland America's Nieuw Statendam Cruise Ship
How to Make Friends on a Cruise
9 Free Things to Do on Norwegian Encore
Pictures of Norwegian Encore 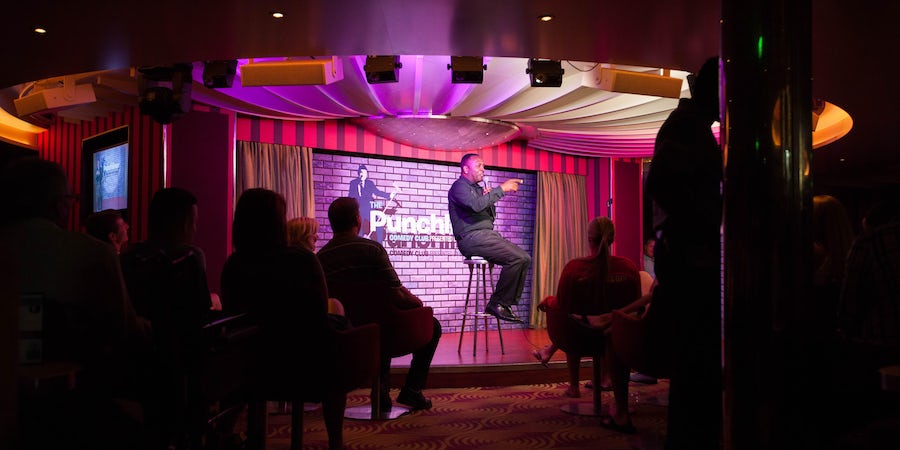 Carnival offers comedy shows nightly, often in a smaller, secondary show lounge rather than in the main theater. A cruise will usually have two to six Punchliner acts onboard (often in rotation), depending on the length of the cruise, with one to five comedy shows scheduled for each evening. A five-night cruise might have 10 shows total, whereas a nine-night sailing might offer 30 performances. Early-evening shows are deemed family-friendly, with no cursing and all-ages material. Late-night shows are for adults only, with themes inappropriate for children.

Comedians vary in quality -- and the one you love, your shipmate might hate -- but shows are always popular, often with standing room only. Arrive early to get a seat, but know that if you sit up front, the comedian might pick on you. If you're watching back-to-back Punchliner acts, Carnival's entertainment staff might make everyone leave the lounge, get in line and file back in, to allow different people the chance to get the choice seats.

Related: 7 Deadly Sins of Cruising and How to Rise Above Them

All Carnival Punchliner Comedy shows are free of charge, though some comedians are funnier when you've purchased a cocktail to sip before or during the show.