You may also like
Dismiss
The Sanctuary on Princess Cruises
10 Reasons to Take a Cruise over a Land Holiday
Coastal Cruise Tips
Best Cruise Travel Agents
Cruise Passenger Demographics: Who Will Be on My Cruise?
Sail Here, Not There: Avoiding Overtourism in Cruise Ports
How Much Should I Tip My Room Steward on a Cruise?
Cruise and Stay Holiday Tips
23 Things Cruisers Love to Complain About
How to Book a Suite for Less 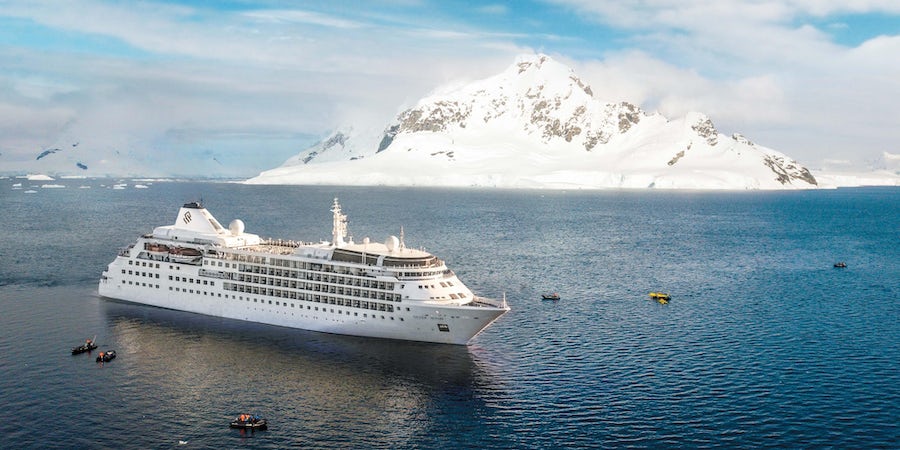 Luxury Alaska Cruises: All You Need to Know

Alaska cruises top many a seafarer's bucket list, offering exposure to jaw-dropping scenery, rugged pursuits like dogsledding and hiking, and up-close encounters with fauna that include bald eagles, moose and whales -- not to mention some of the freshest and tastiest salmon and king crab legs found anywhere.

What is the best luxury Alaska cruise? Below, we'll tell you what, exactly, luxury Alaskan cruises are, which lines offer them and what sets the offerings of those lines apart from what you'll find with more mainstream lines.

In Alaska, where the scenery and sights are larger than life, there's a huge benefit to being on a small ship. Because luxury cruise ships are smaller and carry fewer passengers than mainstream vessels, you won't have to jostle through crowds to snag a prime viewing spot on deck when whales are breeching in the distance, and it's likely that your shore excursion groups will be smaller, leading to a more personalized experience.

Luxury cruise lines sailing to Alaska often call on more off-the-beaten path places, too. For example, Seabourn routinely calls on Wrangell, Alaska and Klemtu, British Columbia on its Alaska itineraries, neither of which are common stops for most mainstream Alaskan cruise lines.

The smaller-sized luxury ships are also able to get closer to glaciers than their mainstream counterparts, visiting the rarely-seen North and South Sawyer Glaciers at the end of Tracy Arm Fjord, for example.

On a general level, luxury cruises are more inclusive, often providing soft drinks, alcohol, alternative dining, in-room extras, tips and even some shore excursions in their fares, while mainstream lines charge extra for them. The quality of food and accommodations is superior to that of non-luxury lines, as well.

Further, a higher-than-average crew-to-passenger ratio means cruisers can expect stellar service on their luxury Alaska cruise, which incorporates small but appreciated touches that might include the company of gentleman hosts for women sailing alone, hot beverages at the gangway after chilly days in port or teams of local experts and photographers brought onboard to help you learn and experience as much as possible about the Last Frontier.

As a result, luxury cruise pricing is higher than what you'd pay for an average voyage, but you're paying for a better overall experience. Want to dine at a fancy restaurant with no added fees? Done. Feel like chartering a private helicopter for a once-in-a-lifetime flight that lands on a glacier? Not a problem -- the onboard concierge will be happy to make arrangements.

Finally, if a more adult experience -- read: a small number of kids onboard -- is what you prefer, you're in luck. Alaska cruises typically draw fewer children than Caribbean sailings; luxury Alaska cruises draw even fewer.

Although several luxury lines sail in Alaska, they don't always offer consistent voyages in the region. A handful, in fact, offer Alaska port calls as part of longer itineraries that incorporate other cruise destinations like Asia or Russia, or even transpacific crossings that call on far-flung places like Dutch Harbor.

It's worth remembering that Alaska cruises have a short season, typically offered only from May through September, but sometimes extending into April and October.

Related: Alaska Cruises: Everything You Need to Know for a Perfect Bucket-List Adventure

A look at the some of the luxury cruise lines sailing to Alaska:

Seabourn combines luxury pampering with expedition-style amenities aboard its sleek and intimate Seabourn Odyssey. While Seabourn's Ventures by Seabourn expedition excursions come at an additional cost, they take passengers deeper into the real Alaska than many of their contemporaries.

Silversea has long maintained a presence in Alaska, and once again sends its elegant, 596-passenger Silver Muse to the Last Frontier on sailings from Vancouver. Silver Shadow also sails in Alaska in 2022. A noteworthy feature on Silversea is butler service for all cabin grades.

Other lines, including Oceania Cruises, Windstar and Viking all straddle the realm between premium and luxury offerings in Alaska. These lines typically offer more space per guest than the big mainstream ships and blend varying levels of inclusivity into their fares. This can range from inclusive beverages and gratuities to complimentary internet and even, in some cases, a handful of complimentary shore excursions.

Cunard Line started sailing to Alaska after a multi-year absence in 2019, and continues to do so in 2022 and beyond aboard the elegant 2,081-guest Queen Elizabeth from Vancouver. While the ship offers mainstream accommodations, its Princess Grill and Queen's Grill suites are worthy competitors to any luxury vessel, with private dining rooms, lounges, and deck spaces.

Among Alaskan cruise lines, expedition cruises generally focus more heavily on destination immersion via onboard lectures and enrichment, as well as more rugged adventures ashore that involve getting up close and personal with local animal and plant life. The accommodations aboard expedition vessels are generally more spartan, with fewer onboard amenities and less of a focus on glitzy decor.

If large ships with robust entertainment programs and extensive children's programs are more your cup of tea (or that of your traveling party), you can still enjoy a luxury Alaska cruise vacation.

Holland America Line and Princess Cruises are regarded as the Alaska cruise experts, with the most ships in the region and years of experience under their belts. Holland America's suite occupants get perks like exclusive breakfasts in the Pinnacle Grill, free laundry and dry cleaning, priority boarding for tenders and access to the private Neptune Lounge that stocks snacks throughout the day. Spa-lovers can choose to book dedicated spa cabins, which offer in-room yoga mats, healthier menus for in-room dining and access to a concierge who can arrange spa treatments (for an additional cost).

Meanwhile, Norwegian Cruise Line offers suite passengers and those booked in The Haven suite complex access to a private restaurant, exclusive pool area and cocktail bar. Other extras include pillow-top mattresses, priority seating at shows, priority boarding for tenders and the services of a concierge and 24-hour butler.

Whether you're on a luxury Alaska cruise or not, you can have luxury experiences in port. Due to Alaska's amazing scenery and climate, the region brings with it some of the most expensive shore excursion options. These include flightseeing -- checking out breathtaking aerial views by private plane -- and heli-hiking, which takes passengers hiking on glaciers or tundra via helicopter. These tours can range from a few hundred dollars to more than $1,000 for two people in some cases, but they're solid choices if you want to spare no expense when making your Alaskan cruise a once-in-a-lifetime trip.

Luxury Alaska cruise lines kick the offerings up a notch with more exclusive, immersive and tailored experiences like private cars for hire so you can plan your own day in port (drive the Yukon Highway, check out a remote lodge, etc.) and volunteer opportunities in local communities.