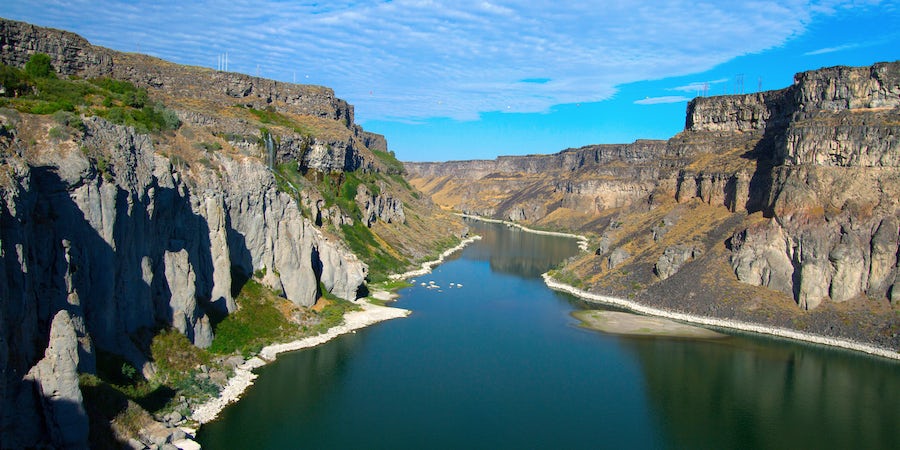 The duo of the Snake and Columbia rivers is one of the most in-demand river itineraries in the United States -- and no wonder. There's an abundance of history, including the storied Lewis and Clark expedition, which in the early 1800s introduced America to lands and peoples previously unknown. There's wine. The Pacific Northwest is getting a lot of buzz -- rightly -- for its superb winemaking and the handsome locales that make it possible. And there are natural landmarks like Multnomah Falls, the Columbia River Gorge and Hells Canyon, North America's deepest river gorge.

But it's the story of the Lewis and Clark Corps of Discovery, an expedition of "wilderness diplomats" that began in 1804 and lasted 28 months that supplies the narrative of most itineraries. A Columbia and Snake rivers cruise provides an opportunity to immerse yourself in that history lesson through nature walks, lectures and stellar museums and parks that relay one of early America's most dramatic tales. The cruise lines also pay homage to the region's wines with tastings onboard as well as excursions to a winery. Despite all the possible activities, the pace of the itineraries is overall slow and relaxed.

Cruises operate from April to November, with no month a particularly bad time to sail the Columbia and Snake Rivers. (Lindblad only operates for a month or so in September and October.) Spring months can be rainy, particularly on the western part of the Columbia, but it's that precipitation that lights the hillsides a verdant green. July and August trend hot; in the early fall, the vineyards are pretty with grapes on the vines. Wine lovers should look to travel in early October, when the harvest and crush occur. Ships on the Columbia and Snake rivers typically cruise between Clarkston, Washington, and Astoria, Oregon, on the Pacific coast with embarkation or disembarkation in Portland, depending on which way the ship is headed. It's a 500-mile journey that stretches from the arid, golden hillsides of eastern Washington to the moisture-rich, western slopes of Oregon. Along the way, the ships traverse eight locks. (Editor's note: Passengers who embark or disembark in Clarkston fly in or out of airports in Lewiston, Idaho, a 20-minute drive from the dock, or Spokane, Washington, two and a half hours away.)

Most of the cruises are seven nights with the option of a pre- or post-stay in Portland. The itineraries generally focus on the Lewis and Clark expedition. The occasional wine-themed cruise is also becoming a staple. All in all, the various ships call on many of the same ports -- among them the Oregon communities of Hood River, Pendleton and The Dalles. American Queen Steamboat Company offers the most comprehensive itinerary choice with three different routes: Clarkston, Washington, to Portland, Oregon, or Vancouver, Washington, and vice versa, which travels on both the Snake and Columbia rivers; and a Portland to Vancouver route, which is a Columbia River-only itinerary. Hells Canyon: A remnant of the last ice age, Hells Canyon on the Snake River is primarily accessible by small water craft like jet boats -- and that's how cruise passengers are introduced to this scenic spot where the borders of Oregon, Washington and Idaho meet. Along the way, guides point out Indian petroglyphs, abandoned mines and wildlife such as mule deer and Rocky Mountain bighorn sheep. Occasionally, you'll see "cast and blast" boat charters with fishermen-hunters who are both "casting" for fish and "blasting" for the chukar partridge, a game bird. The Hells Canyon region, where the Lewis and Clark expedition once traded for food, was home to the Nez Perce Native Americans who lived there for thousands of years.

Columbia Gorge Discovery Center, Oregon: There are some terrific museums and park sites on the itinerary but none rivals this one when it comes to telling the history of the region in pleasingly packaged exhibits. Ice Age geology detailing the Missoula floods, native baskets, the Oregon Trail, the explorations of Meriwether Lewis and William Clark -- it's all there. Of particular interest is the cargo the expedition carried on the long journey to find a water route to the Pacific Ocean. The discovery center is located on 54 acres overlooking the Columbia River and there are nature trails showcasing plants Lewis and Clark collected and catalogued for the first time in history -- among them, golden currant, mock orange, green rabbit brush, ironwood and the Oregon white oak.

Multnomah Falls, Oregon: The falls, plunging 620 feet, is the most visited attraction in Oregon. There is a 2.2-mile round trip hiking trail that wanders past the thundering falls and up a series of switchbacks through old growth Douglas fir to a rim. From there, it's a short walk to the viewing platform cantilevered over the falls.

Fort Clatsop, Oregon: The park has a 2006 replica of the fort where the Lewis and Clark expedition wintered in 1805. It was built from a floor plan that William Clark drew on the elkskin cover of one of his journals. The fort was reconstructed just 100 feet from the site of the original, which rotted away more than a century ago. Equally interesting is an exhibit that features quotes from the voluminous notes that Clark in particular made during the journey. "O! how disagreeable is our Situation dureing this dreadfull weather," he wrote from Fort Clatsop on November 28, 1805. A less glum Clark on March 23, 1806 noted: "[We] have lived as well as we had any right to expect…." By 1806, the expedition was thought to have perished so the men's return to St. Louis on September 23 of that year caused a national sensation. As the Baltimore Federal Gazette reported: "Mssrs. Lewis and Clark…arrived here about one hour ago…They really have the appearance of Robinson Crusoes -- dressed entirely in buckskin." There are also hiking trails and an orientation film at Fort Clatsop.

Cape Disappointment, Washington: The state park fronts the Pacific Ocean and its interpretive center speaks to the hardship, ingenuity and leadership of an expedition that spanned 863 days. An overview starts at the very beginning with President Thomas Jefferson telling Lewis on June 20, 1803: "The object of your mission…the Pacific Ocean." On Waikiki Beach at Cape Disappointment is something that will likely surprise: one of six outdoor installations in the Columbia River basin by artist-architect Maya Lin, creator of the Vietnam Veterans Memorial. The Confluence Project, as it is called, marks the 200th anniversary of Lewis and Clark's journey west. Lin's artwork at Waikiki includes a boardwalk inscribed with text from the explorers' journals. It's positioned at the spot where the men found what they were looking for: the intersection of the Columbia River and the Pacific Ocean. Pack with layering in mind. Even with highs in the 70s and 80s during the summer and early fall, it's not unusual to start out with three or four layers of clothing, peel down to one, and layer up again all in a single day. Morning temperatures can dip into the 40s later in the season, which can feel especially chilly on a day with high winds.

Walmart is your friend. If you are departing from Clarkston and have forgotten anything, walk to the nearby Walmart, just a few blocks from the dock, to stock up on any electronics needs (batteries, chargers, power cords), sunscreen, snacks or anything else you can think of. Many of the early ports on the westbound itinerary don't offer much in the way of goods and services.

Protect your valuables. Some of the cruise excursions include kayaking or transportation on inflatable rafts. It's not a bad idea to invest in a waterproof bag for cellphones and cameras.

Read up on Lewis & Clark. Before you go, read Stephen Ambrose's "Undaunted Courage," the definitive book on Lewis and Clark. Stephanie Ambrose Tubbs, daughter of the late National Geographic Explorer-in-Residence, also produced a good book called "The Lewis and Clark Companion." Tubbs occasionally joins Lindblad's Columbia and Snake rivers sailings as the resident Lewis and Clark expert. "The Essential Lewis and Clark," edited by Landon Y. Jones, is also noteworthy for its skillfully presented highlights of the journals of Lewis and Clark, which remain today the single most important document in the history of American exploration.