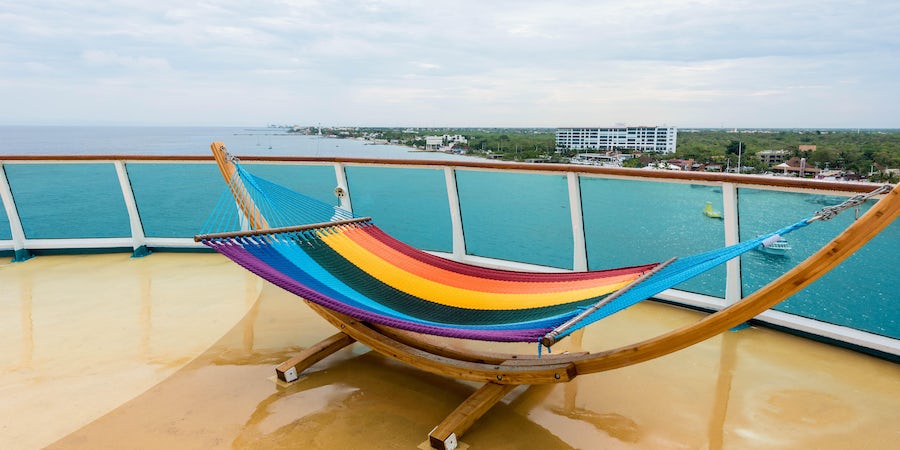 The Sun Decks on Empress of the Seas

How to Choose an LGBT+ Cruise

The popularity of cruising among LGBTQ travelers has only grown along with the LGBTQ community.

The key difference between the early days of cruise travel and now is that today's LGBTQ cruise passengers have more freedom to be open about their sexuality. Cruise lines couldn't be happier about the progress, today seeking out LGBTQ cruisers as a particular market niche. Entire ships are now are chartered exclusively by LGBTQ passengers.

The answer is: not really. At its most basic level, LGBTQ travelers board cruise ships for the same reasons as everyone else, regardless of sexuality. When choosing the perfect cruise, LGBTQ passengers have a few different options to consider, however, such as whether to book passage with specialty tour groups and full-ship charters that cater expressly to the LGBTQ traveler. Those who identify as LGBTQ also need to be sensitive to the gay-friendliness of cruise destinations, as some locales are more welcoming and accepting than others.

The concept of an exclusive, all-gay chartered cruise on a major cruise line was a groundbreaking concept when RSVP Vacations organized its first such cruise, setting sail in 1986 voyage with 750 guests. Today, nearly every major cruise line has hosted all-gay sailings. All of the large cruise lines have actively engage with tour operators like RSVP Vacations to charter out their newest and largest ships for this growing market.

An all-gay cruise differs from a standard cruise on a few important fronts. Obviously, the fact that nearly all of the passengers are gay is the most significant factor. This can be very appealing for passengers worried about encountering homophobia when they're spending money to relax, or those who simply enjoy the idea of being with fellow travelers of a familiar community.

As is common with any chartered cruise, the tour operators also plan specialized entertainment, events and excursions that are unique to their particular cruise. It is very common to have top Broadway performers, comedians and drag queens as part of the entertainment line-up on all-gay cruises. The special programming is also why the price of all-gay cruises is often significantly higher than that of a standard cruise.

The major tour operators of all-gay chartered cruises include Atlantis Events, Brand G Vacations, VACAYA, Olivia, RSVP, R Family and OUTbound. Most all-gay charters are dominated by male passengers, with the exception of R Family Vacations that specializes in family focused sailings and adults-only cruises offering a decent a mix of men and women; and Olivia, which specializes in cruises for lesbians

The LGBTQ travel market is catching up with the ocean cruising world to meet the ever-expanding demand for chartered river cruises. LGBTQ tour operators including VACAYA, Olivia, R Family, OUTBound, and Brand g Vacations are offering primarily full-ship charters on river cruise ships around the globe. River cruise sailings put a stronger emphasis on ports of call than onboard amenities, often offering the chance to walk directly from the ship into the heart of town.

You're less likely to find the broad range of activities, dining options or dance parties that are more common on the large ocean liners on these smaller river ships. The flip-side is that smaller and more intimate river cruise vessels make it easier to establish friendships and get to know your fellow shipmates. The atmosphere on the LGBTQ charter river cruises tends to favor more relaxed indulgences, like locally sourced wines, fine dining, and evenings of torch songs at the onboard piano bar.

Gay group cruises are a popular alternative to the full-ship charter cruises. For these cruises, tour operators will organize LGBTQ-specific groups on standard cruises available to other passengers. The size of these groups can range from a few couples to hundreds of passengers per sailing.

Similar to the all-gay charter cruises, participants on these gay group sailings are ensured they will be among at least some fellow LGBTQ cruisers. In addition, the tour operator will usually include some specialized amenities, such as private "welcome aboard" cocktail parties, group dining arrangements and special shore excursions that are not open to the general passenger base. The tour operator might even include an onboard host to accompany the sailing to help facilitate group activities and socializing.

With larger groups, the tour operator will typically include some unique entertainment just for the group participants. For the most part, however, the cruise experience for passengers opting to go with a group and not a full-ship charter is similar to that of the any other commercially-available sailing. This is why the price of these gay-group tours are only slightly higher -- or in some cases slightly less --  than standard cruise pricing.

Popular organizers of gay group cruises include Pied Piper Travel, Aquafest, Meet Me On Board and Al and Chuck Travel.

LGBTQ travelers considering booking a standard cruise that isn't a full-ship charter or a specialized group can generally be assured a welcoming experience.

Nearly every major cruise line has a nondiscrimination policy that also includes sexual orientation, and staff members on many lines are typically well-trained to be welcoming to all travelers.

Cruises lines such as Carnival, Disney and Royal Caribbean have even received perfect ratings on the Human Right Campaign's Corporate Equality Index, a national benchmarking survey and report on corporate policies and practices related to LGBTQ employees, investors and customers.

Royal Caribbean has been particularly proactive in its efforts to attract LGBTQ customers. It was the first cruise line to appoint an openly gay Diversity Executive and produced a groundbreaking commercial promoting its wedding services featuring a same-sex couple.

In addition, Royal Caribbean's sister cruise line Celebrity has been a major sponsor of Pride celebrations in Miami Beach and on GayTravel.com. Celebrity was also the first to host a same-sex wedding at sea in 2018 following Malta's vote to legalize same-sex marriages. Most of Celebrity's ships are registered and flagged in Malta.

Cruising newcomer Virgin Voyages has made grand gestures of acceptance towards the LGBTQ community on all of its cruises. The line is directly targeting younger, first-time cruisers who value experiences and community over more standard cruising staples. Virgin's cutting-edge design, alternative performance art and plethora of ship-roaming drag queens make for a cruise LGBTQ folks will be proud to post on their social media.

Major cruise lines commonly host organized LGBTQ social events and mixers at the beginning of each cruise to help these niche passengers fully enjoy their vacations, no different, really, than hosting a singles mixer or a bridge tournament. These socials are typically cocktail receptions held in one of the ship's bars or lounges. Notice of such events is usually posted in the daily cruise program available onboard. Check with the concierge desk if in doubt.

It is important to note that in some cases an LGBTQ social might be listed as a "Friends of Dorothy" meeting. This coded reference to the LGBTQ community is a holdover from the days when homophobia was more common and LGBTQ passengers were more protective of their privacy, though many cruise lines now will list these events as LGBTQ get-togethers as knowledge and nomenclature changes and progresses.

LGBTQ family travel is increasing in popularity as a growing number of LGBTQ adults throw their hats into the parenting ring. Many of the top family-friendly cruise lines also rate as being among the most LGBTQ friendly.

From beautiful Caribbean islands to historic European cities, cruise lines specifically pick their ports of call because they are generally safe and welcoming places that cruise passengers want to explore.

Many of these ports of call, such as Key West, Puerto Vallarta, Ibiza, Vancouver and Sydney are especially welcoming of LGBTQ travelers. It is very common for all-gay charters and the LGBTQ groups to plan cruises to these destinations.

On the other side of the cruise coin, some ports of call can be notably hostile towards LGBTQ travelers. There is real danger of violence or legal prosecution not faced by mainstream passengers disembarking at these ports. This is particularly true among certain parts of the Caribbean, the Middle East, Russia, and in ports in Southern and Southeast Asia.

It is crucial that LGBTQ travelers inform themselves of the local laws and customs at all the stops along their given itineraries.  The U.S. State Department provides important country specific information that includes LGBTQ policies and safety concerns on its website that is worth checking when deciding on an itinerary.

One of the best ways to learn about LGBTQ cruising is from other LGBTQ cruisers. In addition to the many reviews of cruise lines and ports of call that can be found on the website, Cruise Critic has forums for sharing and soliciting advice. The Gay & Lesbian Cruisers forum has a wealth of useful firsthand information and a very active community of participants happy to share their knowledge and personal experiences.

Part of the Gay & Lesbian Cruisers forum includes an area for posting a "Roll Call" announcement. This is a way of finding other LGBTQ travelers who may be sailing on your cruise prior to departure.

With a sea of options to suit all tastes, it's not so much a matter of deciding whether or not to take the plunge on an LGBTQ-friendly cruise vacation, but rather charting just the right course of ship, ports and style to suit your needs.