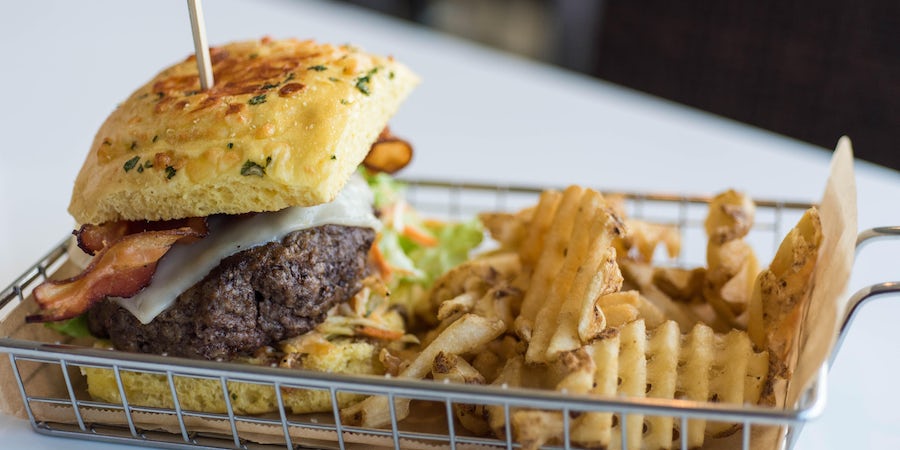 Free cruise dining means it's possible to set sail without having to shell out any more money on food. All mainstream cruise lines offer three meals a day in their ships' main dining rooms and upper-deck cruise buffets. You'll also find that there are usually one or two additional spots that are included in your fare.

But just how good can free food be? We took a look at free dining on Carnival Cruise Line, Norwegian Cruise Line and Royal Caribbean International to see just which line offers the best free dining. Read on for Cruise Critic's breakdown of complimentary dining options from each cruise line to help you decide which is best for you.

What Food Is Free on Carnival Cruises?

Carnival's main dining room menus are available in two dining rooms per vessel in addition to a buffet. On top of these options, Carnival ships offer anywhere from four to 10 additional spots to grab a free bite, even if food is only offered at select times.

Many of these extra venues are located in the buffet on a Carnival cruise. These include the Carnival Deli, Mongolian Wok and Lucky Bowl (only on Carnival Sunrise). Pizza Pirate, which is found on most of the line's ships, is usually near one of the pools rather than inside the buffet.

Guy's Burger Joint and BlueIguana Cantina are the line's most popular alternative free eateries. Both are available on a majority of the line's ships. At Guy's Burger Joint, you'll find a selection of indulgent burgers, while BlueIguana serves up tacos and burritos with a full toppings and salsa bar. The breakfast burrito is an especially popular choice.

On several ships, free lunches are also offered at Cucina del Capitano and JiJi Asian Kitchen, both of which are extra-fee restaurants for dinner.

Ratings and Reviews of Dining on Carnival Cruises:

Cruise Critic editors who have sailed and reviewed Carnival ships rate dining at an average of 3.9. (Dining ratings do not differentiate between free and for-fee venues.)

Read what other cruisers are saying in our Carnival cruise reviews.

Several of the free venues onboard Carnival ships are not standalone eateries but counters where cruisers can grab a bite to eat elsewhere on the ship. Others, like the Mongolian Wok and Carnival Deli, are really just part of the buffet, even though Carnival brands them as separate entities.

What Food Is Free on Royal Caribbean?

You won't find a huge selection of free dining venues on Royal Caribbean ships unless you're sailing on one of their newest and largest ships, ilke Symphony of the Seas, Allure of the Seas or Wonder of the Seas.

Most of the ships in the fleet offer one to three additional venues from which cruisers can get free food items. Royal Caribbean free restaurants include one or more of the following: a pizza place; Solarium cafe or bistro serving sandwiches and burgers; hot dog spot; and a deli-type venue serving sandwiches, soups and pastries.

Cruise Critic editors who have sailed and reviewed Royal Caribbean ships, rate the dining onboard at an average rating of 3.8. Again, ratings do not make a distinction between free and for-fee dining.

Related: 10 Reasons Why Anthem of the Seas is the Cruise Ship for You

Read what other cruisers are saying in our Royal Caribbean member reviews.

Only a few ships in the fleet provide six complimentary dining venues or more, beyond the main dining rooms and buffet.

What Food is Free on Norwegian Cruise Line (NCL)?

Norwegian pioneered the concept of offering numerous and diverse for-fee dining on its ships. The line is well known among cruisers for its variety of dining venues -- including a handful of free eateries. You can expect at least two free main dining rooms on NCL ships plus Norwegian Cruise's buffet. Beyond these, most NCL free specialty dining includes at least one or two additional venues.

One of those is a 24-hour pub-style eatery called O'Sheehan's Neighborhood Bar & Grill (or The Local Bar & Grill on Norwegian Bliss, Sky, Joy and Encore, which has the same menu and vibe as O'Sheehan's). It offers a traditional breakfast menu in the morning and pub favorites like fish 'n' chips, chicken potpie, meatloaf, chicken fingers and burgers the rest of the day.

Ships without an O'Sheehan's or Local Bar & Grill have different complimentary venues (but with the same pub-style fare), such as the 50s-themed Cadillac Diner on Pride of America and the Sports Bar on Norwegian Sun.

A number of Norwegian ships also have a free Asian dining venue onboard.

Ratings and Reviews for Dining on NCL:

Cruise Critic editors who have sailed and reviewed Norwegian Cruise Line ships rate dining at an average rating of 4.1. Keep in mind that free and for-fee dining are not rated separately.

Read what other cruisers are saying in our Norwegian member reviews.

Caveats About Free Dining on Norwegian:

The newest ships in the fleet (Norwegian Escape, Bliss, Joy and Encore) offer fewer free dining spots than the rest of their fleetmates, with no free Asian restaurant or outdoor grill by the buffet.

You'll find the most variety of complimentary dining on Carnival, with more than 75 percent of the fleet now offering Guy's Burger Joint and BlueIguana Cantina in addition to longtime favorites like the Pizza Pirate and Carnival Deli. The food quality is also some of the best we've had, when it comes to eating for free.

Royal Caribbean ships vary widely in the number of complimentary dining venues onboard, so choose your ship carefully if free food is important. Norwegian Cruise line is known for its many onboard restaurants, but the majority of them cost extra.