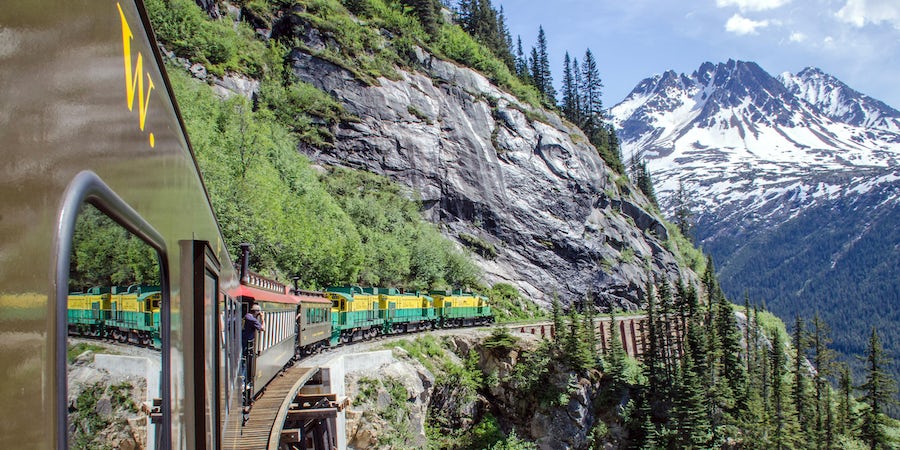 Take a slow boat -- or a ship for that matter -- add a train trip, and you have a rail-cruise vacation, which promises to transport you back to the golden age of travel.

Cruise passengers looking to add an extra special something to their voyage can reach new horizons with so-called rail-sail packages that bring another dimension to cruise getaways. Instead of simply transporting travelers from A to B, the train journey becomes a focal point of the trip, and you can take your pick from the surprising range of rail rides that can be combined with cruises for an unexpected vacation experience by land and sea.

Here are our top 10 picks for cruise-and-rail vacations.

It's easy to see why this route is such a popular one as it combines two of North America's great wildernesses: the rugged Canadian Rocky Mountains and the icy wilderness of Alaska. Most cruisers catch the Rocky Mountaineer train from Canada, boarding at the mountain towns of Jasper or Banff for the four-day journey to either Vancouver or Seattle before joining their cruise ship for a sailing into the heart of Alaska.

Cruises along Alaska's Inside Passage showcase this remote region's stunning backdrop, from mighty glaciers and dramatic terrain to the Gold Rush-era history of the Yukon and Russian heritage around Sitka. Awe-inspiring scenery and the chance to spot bears and whales in their natural habitat is a draw for both the cruise and train portions. Of course, you can do it the other way around and save the train journey until after your voyage.

A wonderful rail-sail combo, this historic railway line, running along the roof of Ecuador through the Andes Mountains, was restored in 2013, following a multi-million dollar project that breathed new life into one of the world's most spectacular rail journeys. It stretches from Ecuador's capital Quito, connecting the Andean uplands where it rises to nearly 10,000 feet, to the Pacific Coast and the port town of Guayaquil, departure point for cruises to the Galapagos Islands.

Related: Top Places to Go in South America Before and After a Galapagos Cruise

Regarded as a triumph of engineering, the Trans-Andean Railway originally opened in 1908, but had fallen into disrepair. Now, passengers who join the train for the four-day journey travel through stunning mountainous terrain, of which the highlight is a descent, by steam train, down Devil's Nose -- a 262-foot cliff-face leading to the coastal plain.

From Guayaquil, travelers can sail or fly to the Galapagos Islands, the legendary archipelago famous for its rich wildlife, with several indigenous species and animals that have no fear of humans. A number of small cruise lines offer sailings that range from a few days to two weeks and visit several islands, each one known for particular wildlife species.

Possibly one of the most famous rail/cruise trips, the Venice-Simplon-Orient-Express combines an unforgettable journey through the heart of Europe with a cruise that departs amid the romantic canals and palazzi of Venice.

Choose to start your journey in style from London's Victoria Station aboard the Belmond British Pullman and, after traveling through the Channel Tunnel, climb aboard the restored Art Deco carriages of the VSOE in France for the picturesque overnight journey through the Alps to Venice. Or, if one train ride is enough, fly straight to Paris to board.

From Venice, the delights of the Mediterranean and Adriatic coasts await, to be explored on the numerous ships that sail from the Renaissance city. Alternatively, take the VSOE as a fitting finale to your cruise as it follows the northwards route back to London or France.

America's railroads lend themselves to pairings with countless cruise and rail departures, and this particular route showcases the heritage of the country's Deep South. Starting in Memphis, the city linked inextricably with Elvis Presley and the growth of the Civil Rights movement, the 6-hour Amtrak train route passes through Tennessee and the Mississippi Delta region into Louisiana, where the houses take on a more Gallic slant, and the train rolls past the bayous and swamps this state is known for. You might even spot basking alligators and pelicans.

And then it's New Orleans, a city as famous for its French ambiance as much as its musical vibe as the home of jazz. The location of the "Big Easy" on the banks of the Mississippi River makes it an ideal departure point for cruises to the Caribbean, with stops at islands including Jamaica and Grand Cayman.

5. Oslo to Bergen by Train and Norwegian Cruise

Ride the rails across the "Roof of Norway" on the famous Bergen Line for this hair-raising rail/sail adventure. It isn't only one of the world's greatest train journeys; it is also the highest line in Europe, climbing across the snowy Hardangervidda mountain plateau on a 306-mile route between Oslo and Bergen.

En route it stops at Finse, which at 4,000 feet is Europe's highest mainline station. The 7.5-hour journey can easily be combined with sailings from Bergen (lines include Hurtigruten, among others) that follow Norway's coastline northwards into the Arctic Circle, with stops including Alesund, Trondheim and the Lofoten Islands.

6. The Alaska Railroad and Alaska Cruise

If you can't get enough of the Last Frontier (and who can?) be sure to include a journey on the Alaska Railroad as part of your land tour of Alaska. Many cruise lines include the train as part of their Alaska cruisetours between marquee destinations like Anchorage, Denali National Park, Talkeetna (famous as the inspiration for "Northern Exposure") and Fairbanks, known for northern lights viewing -- plus the cruise ports in Whittier or Seward, of course.

Princess and Holland America own and operate their own cars and trains on the Alaska Railroad, though it is possible to book independently. Regardless, the experience of soaking up more wildlife and jaw-dropping scenery along the rails is made to be a seamless one. Passengers are whisked along scenic highlights to overnight cabin stays and, ultimately, to or from their cruise ships on a number of different routes.

Related: Alaska Railroad: Everything You Need to Know to Plan the Perfect Cruise Tour

7. Eurostar to Europe and River Cruises

For cruisers who like the ease of taking the train to see multiple cities, catching Eurostar opens up a host of cruise options. While dedicated rail-lovers can negotiate their way across Europe to sail from Mediterranean ports, some of the most popular and convenient rail/cruise combinations involve river voyages. Begin by spending a few days in London ahead of boarding a Eurostar train bound for Paris. Cross through the Chunnel between these two world-famous cities on a high-speed train that will get you there in as little as two hours and 16 minutes.

Once in Paris, the quickest and easiest pairing with Eurostar are Seine itineraries, which start and end in the City of Lights, sailing through Normandy and visiting Claude Monet's gardens at Giverny en route. Another French spot within easy reach of Paris is Bordeaux, where cruises along the Garonne and Dordogne rivers provide a fitting taste of this rich wine region. Beyond that, cruisers can venture further on Europe's railways, via major inter-changes at Lille and Brussels, in addition to Paris, to take river cruises along other continental waterways such as the Rhine and the Danube.

Enjoy Scottish traditions, Highland heritage and unspoiled scenery on this rail-cruise combination that explores the Highlands and islands of Scotland in typically traditional and upscale fashion, starting with one of Britain's most iconic trains. This is evident from the moment passengers are welcomed aboard the stately Royal Scotsman train at Edinburgh's Waverley Station for a two-, three- or four-night journey into the heart of the Scottish Highlands, visiting whisky distilleries, country houses, castles and gardens.

The train trip is followed by a voyage on the upmarket Hebridean Princess ship -- chartered by the Queen for her 80th birthday -- on sailings to the Inner and Outer Hebrides, visiting islands such as Lewis, Skye, Stornoway and St. Kilda.

The sister of the Venice Simplon-Orient-Express offers similarly high standards as it travels between the tropical terrain of Bangkok and Singapore, yet the rail/sail experience is arguably more exotic. The three-night ride from the Thai capital takes passengers through paddy fields and past grazing water buffalo before stopping at the River Kwai, scene of the notorious wartime Death Railway.

The Oriental Express continues through Malaysia's tropical hinterland, stopping at Butterworth for a visit to Penang Island before reaching Singapore. The city-state is a popular starting and finishing point for Asia cruises, making the train ride an easy option to add on to sailings. Many ships departing Singapore offer cruises along the coast of Thailand and Vietnam, while longer voyages sail southwards to Indonesia and onwards to Australia.

10. Pride of Africa Train and Cruise

This cruise and rail journey means travel through some of Africa's most compelling landscapes on the Pride of Africa train, run by Rovos Rail, that transports passengers back to its 1920s heyday and the halcyon age of rail travel. Passengers can relax in the teak-finished restored Pullman-style carriages aboard what's regarded to be one of the most luxurious trains in the world, on various routes across the southern part of the continent.

The journeys between Pretoria and Cape Town, Dar es Salaam and Namibia showcase the region's national parks and wildlife along with the picturesque beauty of South Africa's Garden Route and the magnificence of Victoria Falls. A growing number of cruises depart from Cape Town, and occasionally from Dar es Salaam, for sailings to the Indian Ocean, along the African coast or farther afield.