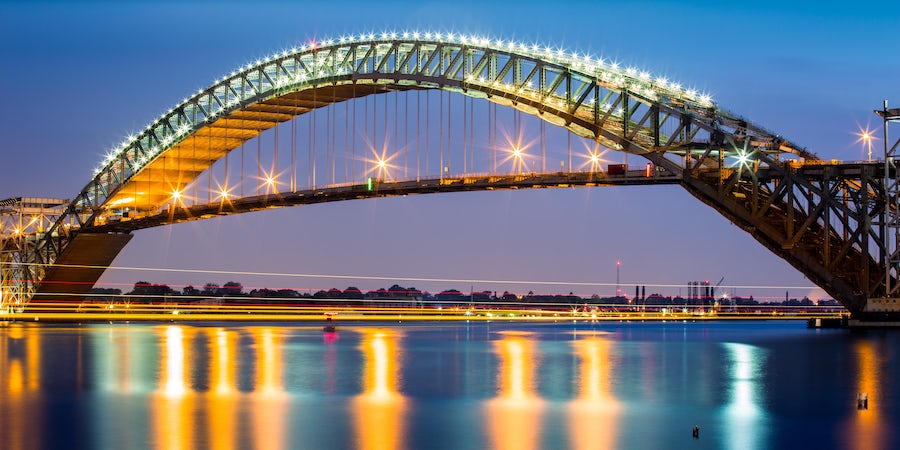 Getting There by Car

Directions to Cape Liberty are below:

From the North:
Take the New Jersey Turnpike/I-95 South to Exit 14A/Bayonne. Follow the signs for Route 440 South. Proceed 1.5 miles and make a left into the Bayonne Ocean Terminal. The cruise terminal is two miles straight ahead.

From the South:
Take the New Jersey Turnpike/I-95 North to Exit 14A/Bayonne. Follow directions above from Exit 14A.

From the West, via I-80:
Take I-80 East to I-95 South to the New Jersey Turnpike. Take the turnpike south to Exit 14A/Bayonne. Follow directions above from Exit 14A.

From the West, via I-78:
Take I-78 East directly to the New Jersey Turnpike. Take the turnpike east to Exit 14A/Bayonne. Follow directions above from Exit 14A.

Cruisers departing from Cape Liberty can fly into LaGuardia Airport or the John F. Kennedy International Airport, both in New York City, as well as Newark Liberty International Airport, located in New Jersey. From any of these, you can pre-arrange a shuttle to your cruise ship through your cruise line. Taxis are also readily available, though from LaGuardia or JFK airports, a taxi (or car service) will set you back quite a bit. Public transit is not recommended for these airports either, as both are at least two hours from the port and require several trains and/or buses to get to either Newark Penn Station or Bayonne (see Public Transit below). Newark Liberty is much closer to Cape Liberty, so public transit is more feasible. From the airport, you'll need to take a short AirTrain ride to NJ Transit's airport station, and then hop on a Newark Penn Station-bound train. From Newark Penn Station, you'll need to take a taxi to get to the port.

Getting There via Amtrak

Amtrak trains come from all along the East Coast (and beyond) to Newark Penn Station. From the train station, you will need to take a taxi to get to the port.

Getting There by Public Transit

Take the PATH train from Manhattan to Jersey City or Hoboken. From either of those cities take the Hudson-Bergen Light Rail train to Bayonne and get off at the 34th Street Station. From here you'll need to call a taxi to drive you to the port, which is about two miles east of the train station. You can also take the PATH to Newark Penn Station, from which you'll need to get a taxi to the port.

From the New York City Port Authority Bus Terminal, take the 99S bus to Bayonne; tell the driver you want to get off at 33rd Street and Kennedy Boulevard in Bayonne. From here you'll need to call a taxi to drive you to the port, which is about three miles east of Kennedy Boulevard. You can also take a bus to Newark Penn Station, from which you'll need to get a taxi to the port.

Parking is offered on site in a secured parking facility, located right next to the cruise terminal. Parking fees are $19 per day.

When you disembark at the end of your cruise, you will find a line of taxis waiting to take passengers to nearby hotels or to Newark International Airport or Newark Penn train station.

What Time to Arrive

What time you arrive at the port will depend on when your cruise ship is scheduled to leave, but you probably shouldn't arrive before 11 a.m., as passengers from the previous cruise will need to clear out of the parking garage before you can park. Arrive at the port no less than 1.5 hours before sailaway to allow ample time for check-in, security screening and the muster drill. Check-in at Cape Liberty is notoriously chaotic. Finding the right line to get into is not always easy, and, for Royal Caribbean cruisers in particular, the tablet check-in technology used for boarding Anthem of the Seas does not always work. Bring your patience; you might have to ask multiple people for directions.

Once off your cruise ship, you'll need to pick up your bags before going through customs. As with most cruise ship disembarkation procedures, you'll find your bags in a color-coded area corresponding to the tags you were given on the last night of your cruise. Porters will be on hand to help you get your luggage to your car.

The terminal keeps a handful of wheelchairs on hand in case one is needed, but to ensure you'll have access to one for embarkation, arrange with your cruise line ahead of time.

Cape Liberty is in the middle of nowhere. There are no shops or kiosks nearby. There is a soda machine, so you won't go thirsty. But, if you realize you've forgotten something and you're already at the terminal, you'll have to wait until the shops onboard your ship open up or you get to your first port of call.

Porters are on hand before and after your cruise to help you with your luggage.

There is plenty of sitting room at Cape Liberty, including lots of folding chairs and a handful of couches.

Bathrooms, of which there are several sets, are easily identifiable.

Free Wi-Fi is available throughout the terminal.

Even though you can take public transportation to get you near the port, you can't actually walk to the cruise terminal from any train or bus stop (no pedestrian traffic is allowed); you'll have to take a cab the rest of the way.