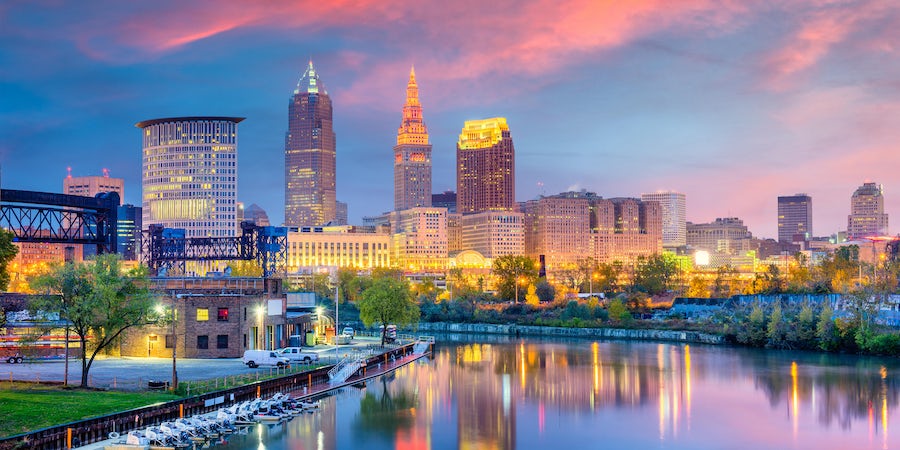 The Mississippi River may be more famous for its steamboat history than any other river in the United States, but the paddlewheel actually got its start on the Ohio River. The Ohio River is still a main thoroughfare for shipping and an integral part of the lives of the people who live along it. Despite the river traffic, Ohio River cruises are scenic and relaxing; there's more to see than you might expect.

The Ohio River meets the Mississippi in Cairo, Illinois, after getting its start near Pittsburgh, Pennsylvania, and meandering westward to Cincinnati, Ohio, and down through Indiana and Kentucky.

With the Lower Mississippi states at their hottest and muggiest during the summer, the bulk of the summer is split between mostly Upper Mississippi sailings and a select few Ohio River sailings in late June and into July. But even temperatures on the Ohio can climb into the 90s and humidity is high during the summer. Always be prepared for sudden thunderstorms brought on by the humidity. Cruisers interested in the Ohio River typically have two itinerary choices (both of which are offered going in either direction).

St. Louis to Cincinnati: The start (or end depending on whether you're sailing up or downriver) is actually on the Mississippi, but the bulk of your cruise will be on the Ohio River. Stops might include Cape Girardeau, Missouri; Paducah, Brandenburg, Henderson and Louisville, Kentucky; and Madison, Indiana.

Memphis to Cincinnati: This itinerary includes a short amount of time on the Tennessee and Kentucky Rivers. Stops typically include New Madrid, Missouri; Paducah, Henderson and Louisville, Kentucky; and Madison, Indiana.

Cincinnati to Pittsburgh: This third itinerary is rarely offered. American Cruise Line doesn't offer it at all, and American Queen Steamboat Company offers it no more than twice a year (in 2015 it wasn't offered at all). Ports visited on this itinerary include Maysville, Kentucky; Portsmouth, Gallipolis and Marietta, Ohio; and Point Pleasant and Wheeling, West Virginia.

Louisville, Kentucky. This part of Kentucky is famous for two things -- horse racing and whiskey. Like the first? Head to Churchill Downs, home of the Kentucky Derby. Prefer the drink? The Jim Beam distillery is nearby; tours visit the rack house and, of course, conclude with a complimentary tasting.

Memphis, Tennessee. Elvis Presley, B.B. King, Johnny Cash -- Memphis is synonymous with music, be it blues, jazz or rock 'n' roll. Tour Presley's Graceland mansion or Sun Studio where Elvis, Cash, Roy Orbison and Jerry Lee Lewis all got their starts. Stroll down Beale Street, peeking into the dozens of music clubs. Explore the country's troubled history at the National Civil Rights Museum, located in the former Lorraine Motel where Martin Luther King, Jr. was assassinated in 1968. And while you're in Memphis, don't forget to get a taste of the city's famous barbecue dishes.

Paducah, Kentucky. A tiny town located near the confluence of the Ohio and Tennessee Rivers. Its main attraction is a beautiful 50-piece mural detailing the history of Paducah from its early Native American roots through the Civil War and into the 20th century.

Madison, Indiana. A quiet river town (except during the Madison Regatta, a powerboat race which dates back to 1911), you'll see lots of Federal and Greek Revival-style homes here. Once the site of 13 saddletree (the frame on which saddles are built) factories, only the Schroeder Saddletree Factory and Museum (which operated for 94 years) remains fully intact. Think small. While itineraries begin and end with big cities (St. Louis, Memphis, Cincinnati), Ohio River itineraries focus on small-town USA; there might be less to see, but residents love to welcome you into their town.

Bring bug spray. States along the Ohio River in July can get pretty muggy and with humidity come mosquitoes. They're not so much of a problem on the river, but during port stops you'll want something to keep them away.