You may also like
Dismiss
The Truth About Solo Cruise Cabins
Grand Circle vs. Vantage River Cruises
Jewish Cruises: From Holiday and Heritage Tours to Kosher Cruises
Single Parent Cruise Advice: Your Questions Answered
How to Retire or Snowbird on a Cruise
Can I Play Bridge on a Cruise?
Best River Cruises for Single Travelers
Festival at Sea: Immerse Yourself in African American Culture on the High Seas
Best Cruises for Singles Over 40
7 Things to Know About Holiday Singles Cruises 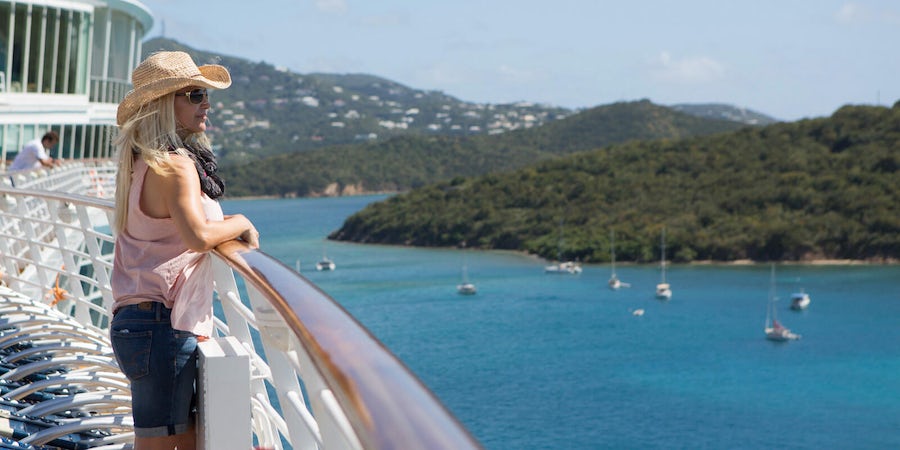 In many ways, cruising is an ideal getaway for solo travelers. Several cruise lines welcome singles with receptions, usually held early on in the cruise, that allow them to meet other solo passengers. Some -- like Crystal or Holland America -- even have gentlemen dance hosts onboard lengthier voyages so women traveling alone don't feel like wallflowers when the band strikes up. Seabourn makes sure all solo cruisers are hosted at dinner by the ship's officers, staff or entertainers, or with other passengers. And, with themed cruises on the rise, solo travelers can choose to book onto group sailings targeting singles.

If you're contemplating cruising on your own, what do you need to know before booking a voyage? Read on to find out how to avoid single supplements, choose a ship and meet people onboard.

The biggest hurdle for solo cruisers is the dreaded single supplement. Because most lines don't offer cabins for one, or because the few that exist sell out quickly, they will typically charge an extra fee to a solo traveler who wants to reserve a double-occupancy cabin sans roommate. This surcharge can range anywhere from 10 percent of the cruise fare to 100 percent (which, in essence, means you're paying double -- or the same price as two people sharing a cabin).

Many cruise lines offer price breaks on occasion, depending on the season and on how many cabins are booked on individual ships. If you can be flexible about your travel plans, some cruise lines may extend last-minute solo discounts on close-in sailings. Some deals we've seen include single supplements waived completely on seven-night Greece cruises on the yachts of Variety Cruises; on select Star Clippers tall-ship sailings in the Mediterranean, Caribbean and Asia; and on select itineraries of upscale French cruise line Ponant.

These offerings can change from week to week, so keep checking back, or sign up for cruise line email alerts to find out about the newest promotions. They're not always well-publicized, so be sure to ask your travel agent if there are any sales currently. Also check Cruise Critic's

forums for news of the latest solo deals.

Sharing a cabin with a stranger might not appeal to everyone, but it does mean savings. A handful of lines still offer roommate matching services. Basically, you ask to be paired with a same-sex roommate when you book, and if the line can match you, you'll pay no extra supplement. If a partner's not available, you'll still cruise solo at an agreed-upon fare.

Look to river lines like Grand Circle for such a service. Expedition line Lindblad Expeditions offers a similar "share guarantee" on most sailings, as does Quark Expeditions via its "request-share" program. International Expeditions does the same, though IE ups them all by waiving single supplement fees entirely on select cabins for its Amazon, Galapagos and Cuba cruise departures (excluding holiday periods).

If you're interested in finding a roommate, and the cruise company can't help, you might have luck with roommate matching services, which pair travel-minded single people for a fee. Generally, members of these services post their travel plans and information about themselves, and it's up to each member to contact those who sound like compatible companions. Alternately, look for travel-related message boards. Some of these allow people to post that they're looking for someone to travel with them.

Also, singles-only travel companies will usually try to match up cabinmates when they schedule cruises. They book groups on regularly scheduled cruises on major cruise lines, ensuring that you'll have solos to keep you company onboard. They also usually offer a group leader and special activities for your group in addition to the ship's activities.

Another option for solo cruisers is to find a ship with cabins meant for one. Norwegian Escape, Norwegian Getaway, Norwegian Breakaway, Norwegian Epic and Norwegian Bliss all have an allotment of studio cabins that are priced for single occupancy and feature an exclusive, shared social space called the Studio Lounge. The lounge offers beverages, two large TV screens, hosted daily gatherings and a concierge for booking dinner reservations and shore excursions. (Note that Norwegian's Pride of America also has four solo cabins, but no special lounge.)

Likewise, Royal Caribbean features 28 dedicated solo cabins aboard each of its Quantum-class ships (Quantum of the Seas, Anthem of the Seas and Ovation of the Seas), including interior studios with industry-first "virtual balconies" (80-inch floor-to-ceiling LED screens projecting real-time ocean and port views) and "super studios," with proper 55-square-foot open-air balconies. Harmony of the Seas also offers inside and ocean-view studios.

Holland America's Koningsdam offers 12 purpose-built single ocean-view staterooms; the line's new Nieuw Statendam will debut in late 2018 with a dozen solo-dedicated staterooms of its own. Cunard also offers a handful of single occupancy staterooms on its three ships.

Looking ahead, Celebrity's new Celebrity Edge -- debuting in December 2018 as the first in a new class of ship for the line -- will have an allotment of 116 solo staterooms, complete with a balcony; it's a first for the line.

(For more details on mainstream cruise lines that offer single cabins, along with pricing policies, read our 10 Best Cruises for Solo Travelers feature.)

You don't want to choose a ship merely because it has a good deal on a solo cabin. The type of cruise experience offered and whether it's a good fit for your travel personality is more important to you enjoying your vacation.

The industry's trend toward bigger and bigger ships -- like the nearly 5,500-passenger Harmony of the Seas -- makes it a bit harder to meet others who may be traveling alone (comparable to the difference between living in a small village versus Manhattan). When you sail with thousands of cruisers onboard one ship, you're not guaranteed to run into the same friendly folks you meet on a shore excursion or at the casino later on in the cruise. However, there will be plenty of onboard activities guaranteed to keep you busy and entertained at all hours.

Small ships, on the other hand, tend to be quite social, and you'll see the same faces again and again. Open-seating dinners, smaller excursion numbers and an emphasis on interactive activities (like game play and trivia) are conducive to meeting people and making friends. However, these ships tend to carry an older clientele and a higher price tag, so they might not appeal to young, single travelers. They also have fewer entertainment options and late-night activities.

Since upscale lines tend to offer price breaks to solo cruisers more often than the mainstream lines, you may find that cruising alone on a luxury ship with a minimal supplement is a better value than sailing on a mass-market ship with a heavy supplement.

Expedition cruises, with their action-packed excursions and intimate onboard communities of like-minded adventurers, are especially well suited to solo travelers who are interested in nature and active pursuits like hiking and kayaking. Lindblad Expeditions sets aside solo-occupancy cabins on all ships in its fleet (priced at least 25 percent less than a standard cabin for two) and also offers a "share guarantee," meaning that you'll sail at half of the double-occupancy rate, whether or not they manage to match you with another solo passenger of the same sex.

Once You've Booked a Cabin

There's an art to traveling singly -- and happily. Unless you're cruising solo to get away from people, here are some suggestions for mixing and mingling.

Get involved. The best way to meet people onboard is to take part in activities, so choose a cruise ship offering things you like to do (beyond the singles' social), such as intriguing programs, classes or workshops. In that arena, two standouts are Cunard's QM2 -- which has teamed up with the Royal Academy of Dramatic Art (RADA) and Royal Astronomical Society to offer a wide array of lectures and workshops -- and Crystal Cruises, which has an outstanding overall series, featuring language, music and art programs, as well as compelling guest lecturers.

Try the piano bar. Sociable sing-alongs are a good way to make friends. Veteran cruisers know to visit the different bars and lounges the first night at sea. That's when other singles are most likely to be roaming to see who is onboard, and if no one is around, they might not return.

Choose compatible dinner partners. If you opt for traditional onboard dining with an assigned dining time and table, you'll be seeing your dinner companions every night, so it's important that you enjoy them. Do not be shy about asking a maitre d' for a new table if the passengers at your original seating aren't compatible. Requests to be seated with other solo cruisers will often be honored if possible. If you've chosen a flexible dining plan, request to be seated at a table with other diners, if possible, rather than eating alone.

Take the ship's shore excursions. This is a favorite tried-and-true way to meet others; the wackier the excursion, the more likely there will be a bonding opportunity.

Connect with your shipmates pre-cruise. Cruise Critic's Roll Call threads allow travelers on the same sailing to get acquainted and plan excursions, happy hours and dinners together -- before they even embark on the ship. You'll come onboard feeling like you already know people on the cruise. Plus, you can sign up for Meet & Mingle parties on Azamara, Carnival, Celebrity, Crystal, Holland America, MSC, Norwegian, Princess, Regent Seven Seas, Royal Caribbean, Silversea and Viking Ocean to meet other Cruise Critic members aboard your ship.

Hand out calling cards. This is a great tip for a solo trip on a mega-ship, where it can be easy to lose a potential friend in the crowd. You might meet someone you'd like to see again but never run into them by chance. If you make up cards with your name and cabin number and hand them out to new acquaintances, they'll know how to reach you to arrange to get together again. (As always, use your judgment when giving out your cabin number.)

Choose a theme cruise. In addition to dedicated singles cruises, theme cruises -- focusing on topics like music, dance, politics, wellness and sports or film stars -- are a great choice for solo travelers. These chartered sailings feature a wide range of mixers, activities and lectures for participants and often have support staff onboard to facilitate events. The exclusive onboard activities are a great way to meet people, and you have an easy conversation starter since you know that everyone shares at least one common interest.