You may also like
Dismiss
Are Cruise Ships Safe?
Cruise Ship Pool Safety Tips
CSMART: 15 Cool Things You Didn't Know About Carnival Corp.'s Maritime Crew Training System
Cruise Muster Station and Muster Drill: What Are They?
What Is a Cruise Ship Lifeboat?
Hidden in the Fine Print: 16 Things You Need to Know About Your Cruise Contract
Cruise Ship Rescues: What Happens When Your Ship Helps Sailors in Distress
6 Cruise Memories That Will Warm Your Heart
Will I Have to 'Social Distance' on My Next Cruise? 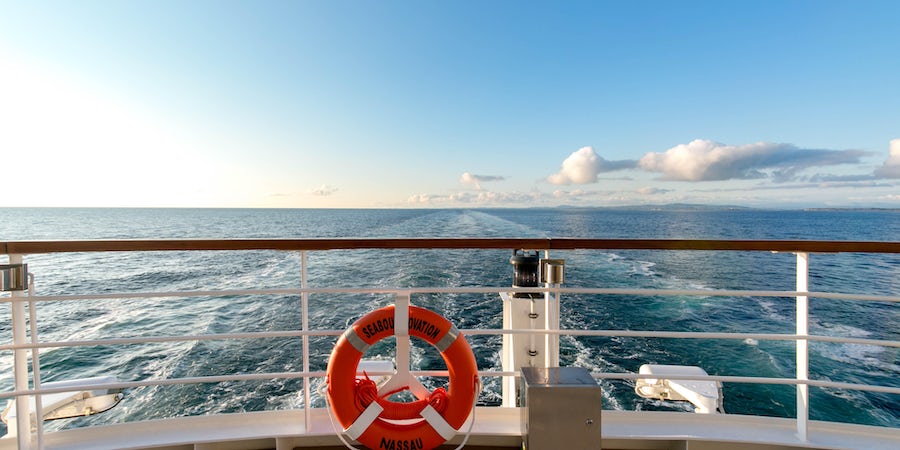 Man Overboard on a Cruise Ship: What to Expect

What does 'man overboard' mean?

"Man overboard" is the maritime term for when a person of either gender has fallen off the ship and needs rescue. When a man overboard situation happens, cruise ship captains and staff go into emergency mode to try to save the passenger or crew member who is in danger.

How do cruise passengers fall off ships?

Most people do not "fall" off ships, as railings are purposefully built high enough to prevent accidents. The ship's security cameras frequently indicate evidence that man overboard situations are intentional. (If they do fall, it's because they've climbed onto a railing or somewhere else they shouldn't be.)

While suicide at sea isn't a common occurrence, it does happen. Usually it takes place at night, after a domestic disturbance or excessive alcohol consumption. Passengers either jump from their cabin balcony or from a high deck on the ship.

How often does it happen?

Related: How to Get An Upgrade on a Cruise Ship

Because a man overboard situation can happen on any vessel in any part of the world, there are no specific statistics compiled by the U.S. government. In general, there are about 20 incidents a year.

Do people always die when they go overboard?

No. Survival rates depend on several factors, including whether the person was injured by impact with the water or part of the ship on the way down and how quickly the person can be rescued by the cruise ship or Coast Guard. Many times, a person going overboard is dead by the time he or she reaches the water.

Wind and weather factors play a role; if the seas are rough, it not only makes it difficult for a person to swim, it's tough for emergency staff to find them in the water. Other factors include the temperature of the sea; hypothermia can begin to set in when the water is less than 70 degrees Fahrenheit.

If I'm on a cruise ship, will I know if a fellow passenger has fallen overboard?

Probably. For one thing, the ship will issue an emergency broadcast to muster its crew. Among the International Flags and Pennants used for maritime signaling, the flag for "O" or "Oscar" indicates man overboard when flown alone. Some vessels have a specific man overboard flagpole where this code flag is flown.

You might hear "Oscar Oscar Oscar" or "Code Oscar" announced to alert the crew. The code "Mr. Mob" may also be used, MOB being the abbreviation and accepted maritime acronym for man overboard.

Second, the cruise ship will turn around as soon as possible to reach the area where the person landed in the water. When a passenger fell off Oasis of the Seas in November 2015, the ship came to a stop in six minutes, traveling almost a mile from the site before it could turn around. As a passenger, you might feel the ship's movements as it performs these maneuvers.

Third, if you are out on deck or have a balcony cabin on the side of the ship where the emergency responders are searching, you will likely see lights sweeping the area.

Finally, the captain will typically make an announcement the next day to inform passengers of any itinerary changes or delays. In some situations, a larger meeting will be held to give people information and tamp down rumors.

What should I do if I see someone go overboard?

Shout out and find a crew member -- any crew member -- as soon as possible. Take note of the place where the jump happened, as well as the time and any details you noticed, as you will likely be asked to give a report to Guest Services. Stay out of the way of any emergency personnel who are trying to do their jobs.

What does the ship do to try to rescue the passenger?

As soon as an incident happens, cruise ship crew will activate a button that pinpoints the place where the person went into the water. The ship will then stop and turn back to that area. The ship and its crew will perform a lengthy search and rescue operation, lasting several hours. The captain will notify other ships in the area, which are obligated to help, as well as the closest local maritime authority.

When a passenger fell from Carnival Dream in October 2019, the ship was 47 miles from Galveston. The ship was aided in the search by several cargo ships and the Coast Guard, which released Dream from the search overnight at which point it continued to its port stop in Cozumel.

Not all man overboard situations happen at sea. In January 2020, a passenger on Oasis of the Seas went overboard while it was docked in San Juan. Local authorities and the Coast Guard created a 300-yard safety zone around the area while a search and rescue operation took place.

Will my ship be delayed if a passenger goes overboard?

A search and rescue operation does take some time, so it's likely that you might lose some time in port or need to make a detour. The ship will do everything in its power to make sure other passengers make their flights home, if the delay will alter debarkation.

Will the ship cancel activities if a passenger goes overboard?

Generally, no. While a passenger overboard situation does affect the tenor of the cruise -- people will be talking about it around the ship and at dinner -- the staff will do everything in its power to get the atmosphere back to normal.

What happens to the family or friends of a person who went overboard?

The cruise lines have care teams who are trained to give emotional support to those who have lost a friend or family member. If an overboard situation took place in a public manner, counseling is available to others on the ship who might need it. Family members or travel companions onboard generally disembark at the next available port, where the cruise line may assist with arrangements to return home. The cruise line will also attempt to notify the emergency contact provided by all passengers in their check-in documents.

Does a criminal investigation take place when someone goes overboard?

While the Coast Guard is in charge of search and rescue, cases of missing U.S. citizens must be reported to the FBI, which has jurisdiction over many incidents that happen on the high seas (areas located outside state and local waters). Cases that happen in port are reported to local authorities who will investigate as they see fit.

In cases where there are witnesses and/or video evidence that don't suggest obvious foul play, the FBI may only choose to investigate if there are reported suspicious circumstances leading up to the man overboard incident or if a family member insists.

In all cases, cruise lines have at least one crew member trained in evidence collection and investigation techniques who will be in charge of the case until the FBI or local authorities can take over. Witnesses and family members onboard will likely be questioned regarding the activities and whereabouts of the victim leading up to the incident or to provide any information relevant to the investigation.

I'm upset because a person went overboard on my cruise. Will I get a refund?

Probably not, unless the itinerary was radically disturbed. As noted, counseling is available, and activities on the ship do resume.

How can I learn more about what happens when a person goes overboard?