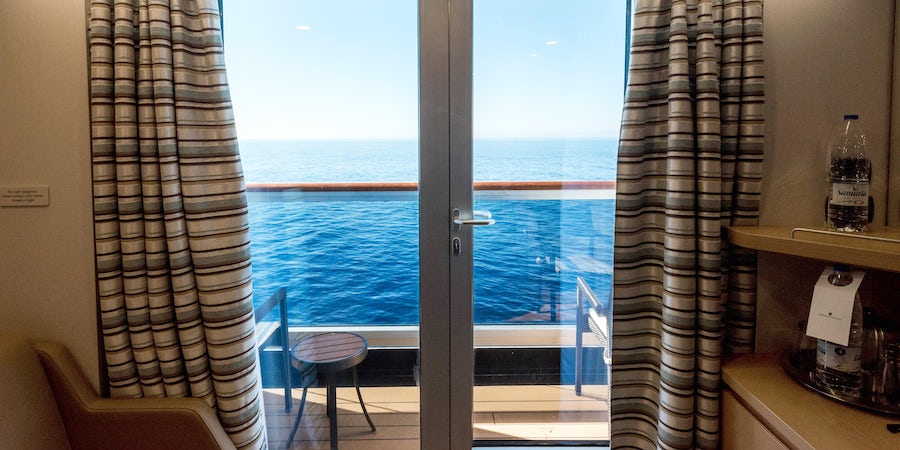 10 Things Not to Do on a Cruise Ship Balcony

Ah, the allure of a cabin with a balcony: They say once you've tried it, you'll never go back. Fresh ocean breezes. Coffee and a morning newspaper on your very own swath of decking. Perfect views of sailaway each day. What's not to love? Quite a bit, it seems, if you're in the vicinity of a fellow cruiser who hasn't brushed up on proper balcony etiquette. The first rule to keep in mind is that the "private veranda" you booked isn't actually so private. Other passengers can hear, see and often smell -- yes, smell -- you, so be careful what you do, and be mindful of the others on surrounding verandas. Here are 10 things not to do on a cruise balcony.

Many cruise lines prohibit smoking on cruise ship balconies anyway, but if you're sailing with a line that hasn't yet banned the practice, keep in mind that it might not be the best idea. Sure, it's a relaxing spot to enjoy some "me" time, but it's unlikely your cabin neighbors will appreciate having their serene spot overtaken by the smell of wafting smoke. All ships provide designated smoking areas, but if you're on a ship that allows smoking on balconies, you still might want to consider asking your neighbors if they mind.

Loud music is for the nightclub and the lido deck. Respect the peace and quiet that many of your veranda neighbors crave by using headphones or keeping the volume to a minimum. Remember, too, that even if the volume isn't loud, it still might be loud enough for others to hear, and not everyone likes the same music you do.

Although it might disturb us to think too much about it, lots of people have sex on cruise ships. We get it. Hanky panky -- from making out to making love -- under the stars seems a romantic notion, but sex on a cruise ship balcony isn't only public (visible from surrounding balconies and folks in port) it's also dangerous. Back in 2007, a man allegedly jumped off his veranda in an attempt to rescue his significant other after knocking her overboard during an outdoor rendezvous. (They survived, but you might not be so lucky.)

Again, just because you have your own personal sun-filled space doesn't mean you should conduct activities of a personal nature out there. Often, balconies are slightly tiered, which means those above you could have a better view of your private bits than you realize if you sunbathe sans clothes. If perfecting your tan tops the list of vacation activities on your list, be sure to suit up.

Of course you should enjoy your balcony. You paid for it, and it's all yours for the duration of your voyage, but bear in mind that others are in the same boat. (See what we did there?) Have fun, but keep the noise to a dull roar -- or, better yet, a dull squeak. Be particularly mindful of this late at night and early in the morning. You might like to stay up and toss a few back until the wee hours or wake at the crack of dawn to enjoy an open-air breakfast, but others won't always have schedules that align with yours, and they might be trying to sleep.

6. Stand or Climb on Furniture or Railings

Safety first. Never climb from balcony to balcony or stand on the railings or veranda furniture -- the last thing you want to do is end up in the water. And, yes, that is possible if you're playing Spiderman and climbing places you shouldn't. (This is especially important if you have children. Keep an eye on them, and close and lock the balcony door when the veranda's not in use.)

It's tempting to toss out a message in a bottle or easily dispose of that apple core you've got in your hand by just dropping it over the side of your balcony -- but don't do it. Cruise lines have strict rules against throwing anything off the ship. Besides negatively impacting the environment, it can also be dangerous for other passengers if the debris lands on a balcony beside or below yours. The single biggest danger to cruise ships is fire, so cigarette butts should never be tossed overboard. If the wind blows them back onboard, you're asking for trouble.

Those in-shower clotheslines hold approximately 1.5 items, which isn't always practical if you're traveling with several people who all want their bathing suits to dry. Draping them over the chairs or tables on your balcony might seem like a great solution at first, but humid sea air does little to rid items of water quickly, and if a strong gust of wind kicks up, you might find that your bikini has suddenly turned into a one-piece.

There's nothing better than a soothing ocean breeze or the sound of water splashing against the side of the ship to lull you to sleep after a long day. The problem is that leaving the veranda door open can mess with the ship's air-conditioning system, wasting energy now and causing you to be uncomfortable later. Plus, if you open your main cabin door while the balcony door is ajar, you'll find yourself trapped in a wind tunnel to beat all wind tunnels -- and it'll send that three-inch stack of spa pamphlets and jewelry sale fliers swirling all over your stateroom.

If your balcony has outdoor lighting, remember to turn it off when you aren't using it. Not only does it waste electricity, but it can also drown out the view of the night sky that your neighbors were hoping to enjoy.