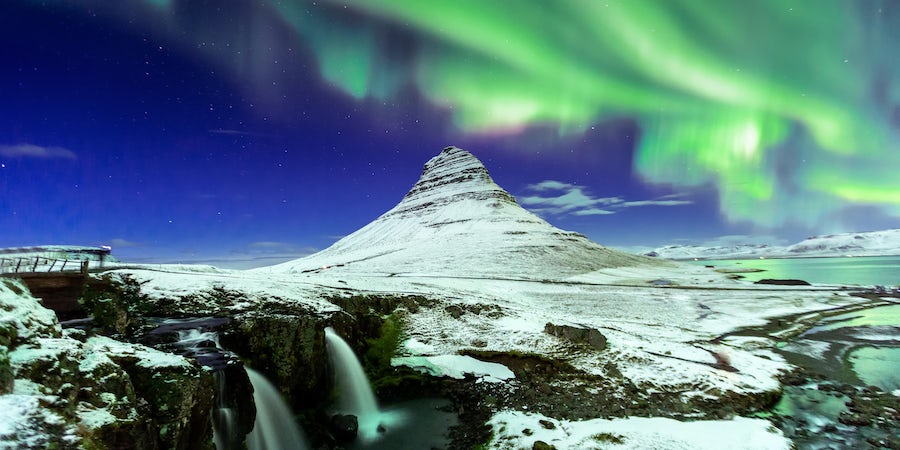 Of course, the main events are the northern lights themselves. Some Native Americans saw the lights as war omens. A myth from the Arctic Circle's indigenous people tells that the northern lights are the spirits of the dead playing ball with a walrus skull. Vikings believed the flashing lights were armor and shields of Valkyries, warrior maidens of Norse myth.

Scientific speculation of why northern lights appear started in the 17th century. Scientists Pierre Gassendi and Galileo Galilei both are credited with naming the glowing night lights "aurora borealis" meaning "dawn of the north." Aurora is the Roman goddess of dawn, and Boreas is the Greek god of the north wind. Modern research of the northern lights phenomenon began around the late 19th century.

Today, NASA studies the northern lights and what causes them. An aurora is caused by energized particles (protons and electrons) released by gaseous plasma explosions on the sun's surface, creating solar winds traveling through space. Aurorae are most frequently seen in the North and South Pole regions because Earth's magnetic field lines cross the atmosphere there year-round. In the Southern Hemisphere, the lights are called "aurora australis." When it comes to actually seeing northern lights, it comes down to luck, but the odds are greatest if you're in the right place at the right time around the Arctic Circle (66 degrees 33'45" North). However, while aurora events are happenstance and vary in intensity, they are most visible roughly between October and March on cloudless, dark winter nights.

Viewing northern lights hinges on three interrelated factors: your location on the planet during the winter season, the local time of day and the solar cycle (an 11-year period when explosions on the sun's surface are more frequent than in other years). Generally, skies are clearest near the spring and fall equinoxes in later September and March.

Special mention needs to go to Hurtigruten, which offers the largest selection of Arctic winter cruise dates. The Norwegian fleet of 11 midsized ships calls on 34 ports, from Bergen in the south to Kirkenes in the north on the Russian border. Hurtigruten operates as both a passenger cruise line and a lifeline for Norwegian coastal residents. These working ships transport locals' cars, fjord towns' freight and up to 1,000 people total on any given day (all onboard announcements in Norwegian, English and German). Hurtigruten guarantees that the northern lights will make an appearance on all winter 12-day Classic Roundtrip Coastal Voyages from October 2015 through February 2016, or you get a free cruise.

Among the mainstream cruise lines, P&O Cruises departs from Southampton, calling on Amsterdam before heading north up Norway's coast. German line Aida visits Iceland and Norway. (German is the only onboard language.) Celebrity Cruises offers a land package in Reykjavik, Iceland, with a northern lights excursion.

Greenland's Arctic Umiaq Line is a year-round ferry-freight-cruise ship calling on ten ports on Greenland's west coast. It carries 248 passengers, has 26 basic overnight cabins (each sleeps four) and food service (guided tours offered in some ports during summer). The ship sails roundtrip from Nuuk to Ilulissat until mid-December, and then only north to Sisimiut until spring, due to unpredictable sea ice conditions. (Onboard languages are Greenlandic, English and Danish.) Itineraries are three and four nights. Northern lights cruises depart mostly from ports in the U.K. and Norway and generally sail 10- to 15-night itineraries during the winter season. Many cruises hug the northern Norwegian coast above the Arctic Circle, and some venture to the Svalbard Archipelago, where the Gulf Stream flows prevent the seas from freezing in winter. Some cruise lines and tour operators host Iceland, Greenland and Northwest Passage cruises in mostly September and March.

Norway: Norway dominates the northern lights cruise circuit with voyages ranging from five nights to 14 nights. When selecting a northern lights cruise, keep in mind that sailing along Norway's three northernmost counties -- Nordland, Troms and Finnmark -- offer the greatest opportunities for viewing northern lights, both onboard the ship and during nighttime excursions ashore. Ports of call often include Bodo, Tromso, Alta, Honningsvag and Kirkenes. Some cruises stop in Norway's Vesteralen, Lofoten and Svalbard islands.

Alaska: Although Alaska enjoys a high volume of aurora activity, its cruises are not often mentioned as northern lights cruises. During the Alaska cruise season, it's rarely dark enough for the lights to be visible. The greatest pleasures of prime northern lights winter season cruising around the Arctic Circle's deep blue waters are the stunning contrasts of scenery, variety of onshore activities and anticipation of seeing the aurorae. Ports vary greatly from industrial centers and fjord villages to picturesque coastal towns and remote outposts on barren, frozen coast.

Tromso, Norway: Considered the gateway to the Arctic from whence many historic explorations launched, Tromso's museums and architecture preserve Norway's adventurous polar past. Port attractions include the city center's preserved mid-19th-century wooden buildings; contemporary stained glass, triangular Ishavskatedralen, a church and concert venue; and Polaria, the Arctic research center and aquarium housed in a stainless steel saw tooth structure that looks like giant, stacked glacial ice shards. Within the 1837 wharf Custom House, the Polarmuseet exhibits recount the region's hunting history in addition to famous icy expeditions by explorer Roald Amundsen and sea captain Fridtjof Nansen of the North Pole ship Fram. Tromso is the base for active adventures ashore, including husky dog sledding and snowmobiling. Considered the North Sea's party port, Tromso has the most pubs per capita in Norway.

Honningsvag, Norway: Cruisers board buses to tour Mageroya Island fishing villages or go to the Nordkapp or North Cape at 71 degrees 10'21"N (1,306 miles south of the North Pole). It's Europe's northernmost point, easily accessible to tourists and marked by a globe sculpture on a clifftop above the pounding Arctic Ocean. Nordkapp's visitor center houses a giant gift shop, modest wildlife, historic diorama exhibits and a semicircular cinema showing a dynamic northern lights film infused with Sami myth and scientific perspectives. Prepare to be flexible. The northern lights are a natural phenomenon that performs on its own schedule, so there are no guarantees you'll see them, regardless of when you sail. But NASA's Space Weather Bureau website (www.Spaceweather.com) helps remove some guesswork by tracking solar storm activity. On many cruises, when crew spot northern lights, they make nighttime in-cabin announcements.

Photographing the northern lights. A tripod or monopod is an absolute necessity to shoot exposures of around 30 seconds or more required to capture northern lights' colors. Always pack several SD photo memory cards and an extra charged camera battery because cold quickly drains them. Finger gloves with flip-back mitten covers make it easy to press the camera's shutter-release button without removing gloves. And, when the lights appear, don't spend all your time fiddling with camera settings. Remember to just tip your face up in wonder as the mystical northern lights dance across the night sky.