You may also like
Dismiss
The Best Repositioning Cruises in 2022 and 2023
Round Trip vs. One-way Alaska Cruises
Embarkation in Seattle: Cruise Terminal Parking, Address and Amenities
Things to Do in Seattle Before a Cruise
Embarkation in Vancouver: Cruise Terminal Parking, Address and Amenities
Which Cruise Can You Book for $500 a Day?
Flying to Your Cruise: A Guide to Long-Haul Airports, Airlines and Flights
The Best Month to Cruise Hawaii
10 Reasons to Stay in Seattle Before Your Alaska Cruise 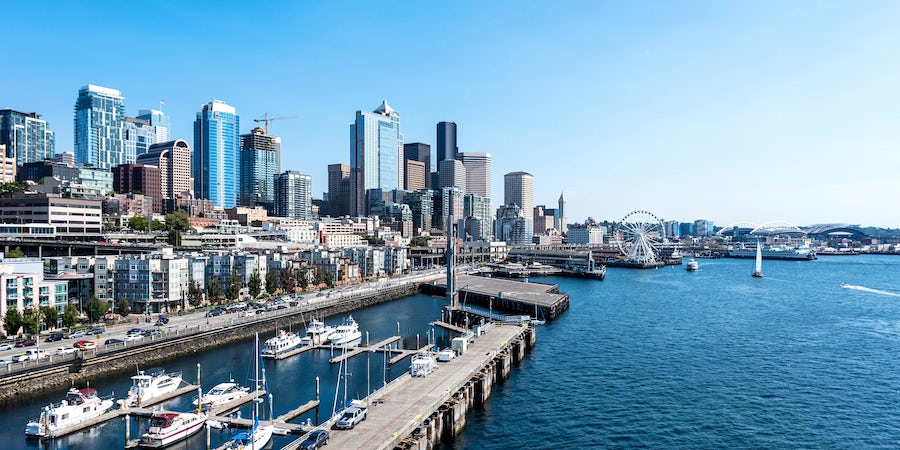 Seattle and Vancouver are two of the most popular embarkation ports for Alaska cruises. Both are incredible cities with major airports and plenty to explore on pre- or post-cruise stays. So how do you decide which port is better for starting out on your Alaska cruise? Take a look at what's offered from each homeport to help you decide.

Many major cruise lines sail out of Seattle, including Holland America, Norwegian, Princess, Carnival, Celebrity and Royal Caribbean (and, among high end lines, Oceania). The majority of these Alaska cruises are seven-night voyages, sailing round trip, with port calls on Skagway, Ketchikan, Juneau and Victoria. Exceptions include the occasional longer itinerary -- for example, Holland America offers a 14-night cruise round trip out of Seattle, and Oceania sails 7-, 10- and 11-night cruises -- and a few one-way sailings at the end of the season.

Seattle actually has two cruise terminals: Bell Street Pier at Pier 66 and Smith Cove at Pier 91. Bell Street is right in downtown, within walking distance to Pike Place Market, the aquarium, hotels, shops and restaurants, but it's only used by Norwegian and Oceania. Other cruise lines use Smith Cove, which is a 10-minute drive from downtown with no attractions nearby. Both ports offer parking for local passengers, as well as luggage storage pre- and post-cruise. They also offer a service whereby cruise passengers can check in for flights while onboard, and their baggage will be delivered directly to the airport. Vancouver also caters to an array of mainstream lines, including Holland America, Celebrity, Princess, Royal Caribbean, Disney and Norwegian. However, it hosts more luxury lines -- such as Regent Seven Seas, Seabourn, Silversea and Crystal -- than Seattle. Itineraries are more varied; while several lines offer seven-night round trip sailings, you can also find 8- to 14-night options, as well as weeklong one-way cruises that end in an Alaska port, allowing for post-cruise touring. Vancouver cruises do not need to call in an additional Canadian port to adhere to U.S. maritime regulations, so itineraries might feature multiple days of scenic cruising or an extra Alaska port in addition to the Skagway, Ketchikan and Juneau mainstays.

Vancouver's Canada Place cruise ship terminal is also in that city's downtown, accessible by public transit and within walking distance of shops, restaurants, hotels and attractions like Stanley Park. The terminal has three ship berths, and it offers passenger services like luggage storage and parking.

For American cruise travelers, sailing from Vancouver requires a passport, whereas round trip Seattle cruises do not. (You'll need to provide alternative forms of ID, such as a driver's license and birth certificate.) Here's the bottom line: Choose a cruise from Seattle if you're on a budget, as airfare from the U.S. is often less expensive, you don't need a passport, and you can compare prices across several mainstream cruise lines. Seattle is a good option for travelers who don't want (or don't have time) to extend their cruises with post-cruise tours into Alaska's interior. Choose Seattle, too, if you prefer to explore Victoria's waterfront, visit the gorgeous Butchart Gardens, or spend some time in Washington State pre- or post-cruise.

Choose a cruise from Vancouver if you want to travel on a luxury line or are interested in a one-way sailing combined with a post-cruise tour. Vancouver is ideal for travelers who prefer itineraries with more scenic cruising or those who might wish to explore Canada before or after their Alaska trips. Vancouver should only be an option for travelers who own passports or who don't mind getting one before they travel.