You're on a cruise, in the middle of the ocean, visiting foreign ports of call and having the time of your life. There's only one thing that's missing: a burrito. If you're a Mexican food addict, you know what it's like to sample haute cuisine on a cruise but secretly hanker for chips and guac or good ol' rice and beans. These cruise lines have you covered with tableside avocado mashing, Cuban delicacies at breakfast and a salsa bar so comprehensive there's a solid chance you'll overdo it (in a good way). Read on for the five best Latin American and Mexican food venues on cruise ships.

Burritos in the morning, burritos in the evening, burritos at suppertime -- this could be the motto of Carnival's BlueIguana Cantina, a burrito (and taco) haven that's complimentary to all passengers. The pool deck outpost serves free, made-to-order Mexican food morning, noon and night with options like chicken, steak or shrimp burritos; chicken, fish or pork tacos; jalapeno tortillas; and toppings like crema fresca sauce and pico de gallo. Side salads, such as watermelon jicama slaw, are offered over at the salsa bar, which will tempt you with mild to outrageously spicy sauces and toppings. Our favorite part? Breakfast burritos are available from about 7:30 a.m. to 10:30 a.m. each day, featuring Mexican-style eggs, beans, salsa and hash browns. Maybe a hair past 10:30 a.m., enjoy a refreshing margarita at the cantina's counterpart, BlueIgunana Tequila Bar. (It's five o'clock somewhere after all.) BlueIguana Cantina is currently on 22 of the fleet's ships: Breeze, Conquest, Dream, Ecstasy, Elation, Fantasy, Fascination, Freedom, Glory, Horizon, Imagination, Inspiration, Liberty, Magic, Paradise, Pride, Sensation, Sunshine, Triumph, Valor, Victory and Vista.

2. El Loco Fresh on Royal Caribbean's Symphony of the Seas

Mexican food is now complimentary on Royal Caribbean's newest Oasis-class ship, Symphony of the Seas, with the addition of this (covered) outdoor Mexican eatery. At Loco Fresh, bright and cheery decor invokes a sense of "fiesta," whether you're indulging in breakfast, lunch or a late-afternoon snack. In the mornings, don't miss "las mananitas," consisting of breakfast burritos and quesadillas, hash browns, scrambled eggs, sausage and bacon. In the afternoon, the menu changes to chicken or beef burritos, cheese or chicken quesadillas, nachos, corn on the cob, and beef, chicken or pork tacos with fresh, soft corn tortillas. What makes the meal is the salsa station, where you can take your pick from homemade guacamole, fire-roasted tomatoes, pico de gallo and many more toppings. For dessert, try one of the parfait cups in flavors like tres leches, chocolate dulce de leche or flan. 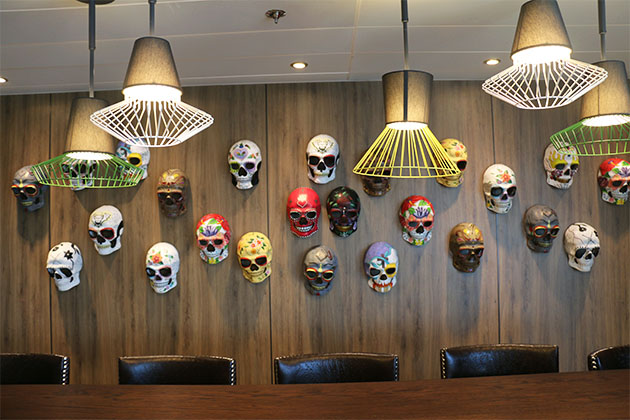 With its debut on the totally refurbished Norwegian Dawn, Los Lobos Cantina became the first upscale, a la carte Mexican restaurant of its kind across the Norwegian Cruise Line fleet; it's now on the line's newest ship, Norwegian Bliss. Replacing a small part of the Garden Cafe, this quirky venue features dishes such as a nopales (cactus) salad with tomatoes, avocados, jalapenos and cotija cheese; or grilled skirt steak marinated in chilis and tequila and served with rice, beans and corn tortillas. Even dessert is authentic, with bunuelos -- a Mexican version of crispy fried dough -- plated with a brown sugar syrup and guava dipping sauce. Decor is modern and funky; if the brightly painted luchador masks-meet-Dia de Los Muertos-skulls along the wall don't grab your attention, the ornate and eye-catching cow skulls hanging above the restaurant's yellow booths probably will.

If you're sailing the Mexican Riviera aboard a Princess ship, you're in for a treat. The line, known for its destination-immersive programming, has teamed up with Bon Appetit for culinary excursions -- and the one in Ensenada is particularly fabulous. Developed in partnership with James Beard award-winning author Bill Esparza, the exclusive tour showcases five stops on the port's surprising food and wine scene. The highlight is a pilgrimage to La Guerrerense, an unassuming little street cart operated by Sabina Bandera, celebrated by chefs and foodies on both sides of the border ranging from Rick Bayless to Anthony Bourdain. Back onboard, Princess incorporates Mexican specialties in its main dining venues during sailings throughout the region, with dishes such as mole, ceviche, fajitas, and desserts like coconut cocadas. Tequila tastings, along with tortilla chips and salsa and endless margaritas, can also be found throughout your ship while you're sailing the Pacific. Salud! 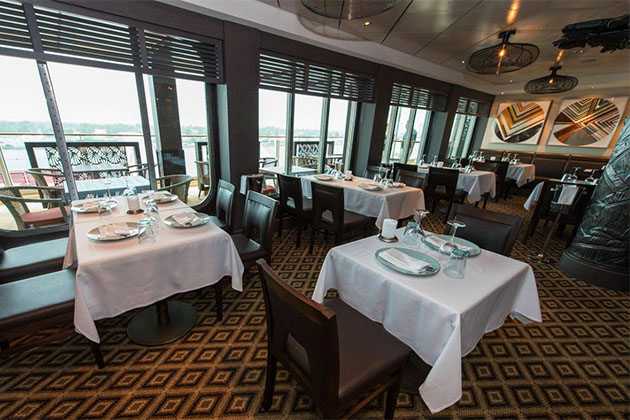 5 Booking Hacks That Will Change the Way You Buy a Cruise
Heed our advice using these five cruise booking hacks and you might be able to find secret pricing, score double the bonuses and land the upgrade of a lifetime.
Unsold Cruise Cabins: How Cruise Lines Fill Them and How You Can Snag One
Getting a deal on a cruise sailing that's not selling well requires some effort -- and usually a lot of flexibility. To take advantage of the opportunity empty cruise cabins present, you must understand how cruise lines go about filling them.
12 Things Not to Do in Your Cruise Room
Sorry, folks, but it's not 100-percent "anything goes" onboard. Whether it's a safety issue (think lighting fires), a privacy issue (no hanky panky on that balcony) or a consideration issue (please don't blare the TV at 2 a.m.), you'll want to curtail certain activities in your cabin -- or the crew may kindly, but sternly, ask that you do so. In case you're tempted, or simply don't know, here are 12 things we ask that you please not do.
How to Find the Best Cruise Bargains in 2020
It's a new year -- in a new decade -- with vacation time to use and cruises to plan. To uncover the best ways to land a cruise bargain in 2020, we spoke to travel agent experts to learn what's hot and where the price is right. What we found is that cheap cruise deals are plentiful, even in the most popular destinations, but getting on the right ship to the right destination might mean taking quick action. We've narrowed down the who, what, where and when of finding the best cruise deals in 2020 so you can spend more time enjoying the seas for less money.
7 Places to Cruise Without a Passport
You've decided you want a vacation, but there's a problem -- you don't have a passport. Maybe you've never had the time, money or desire to travel abroad previously, or perhaps your old passport has expired. Whatever the reason, you still have choices. One option is to take a closed-loop cruise -- a round-trip sailing that leaves from and returns to the same U.S. port. For that, you need only a birth certificate and a driver's license (or other acceptable, government-issued photo ID). You can't cruise just anywhere on a closed-loop sailing, but the choices are more interesting than you might expect. Below, we've compiled a list of seven places to visit without a passport, from scenic Alaska to the beachy Caribbean.
8 Things Not to Eat at the Cruise Ship Buffet
Here's our list of foods we recommend you skip on your next cruise.