You may also like
Dismiss
Can I Use Global Entry at Cruise Ports?
8 Things to Watch Out for When Cruising to China
What Lines Are Doing With Next-Gen Cruise Technology
10 Best Mother's Day Gifts for Cruise Lovers
7 Best Cruise Document Holders
Pickpocket-Proof and RFID-Blocking Gear to Keep Your Stuff Safe on a Cruise
How to Navigate the Airport on Cruise Turnaround Day
Best Gifts for Cruise-Lovers
Carnival Cruise FAQ
How to Keep Your Data Safe When Cruising 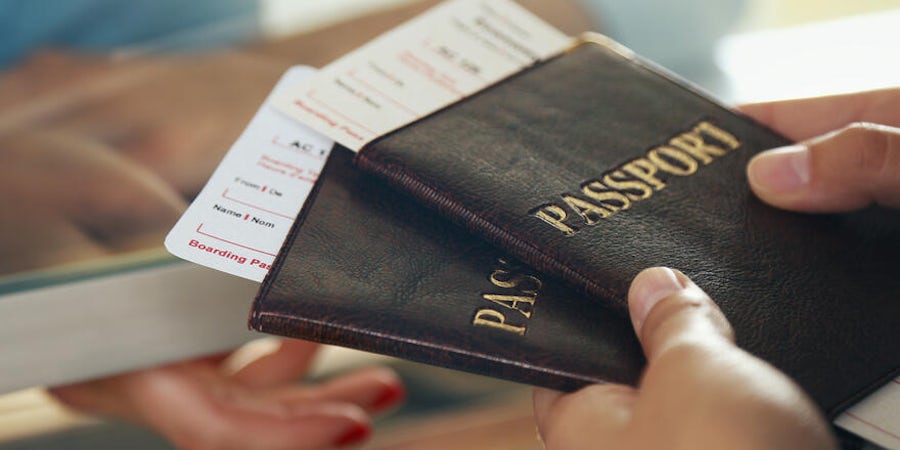 It's a big decision: Should you get a passport card or passport book when preparing for a cruise? Your decision will likely come down to factors like passport cost, how frequently you travel, if international flights are involved and where you plan to sail. To make sure you don’t run into any headaches on your next cruise, we’re breaking down the difference between a passport book and card.

What Is a Passport Card?

The purpose of a U.S. passport card is to allow U.S. citizens to travel by land or sea to Mexico, Canada, over a dozen Caribbean Island nations and Bermuda. Think of them as a passport lite. Passport cards do not allow you to travel by air to any foreign destination, and cannot be used to enter a majority of the world’s countries. They are more conveniently sized than a passport book -- about the size of a driver's license, which makes them easy to fit into your wallet and carry with you. Passport cards have been issued by the U.S. Department of State since 2008.

Related: How to Solve the Most Common Pre-Cruise Problems

What's the Difference Between a Passport Book and Card?

The most important difference between U.S. passport books and passport cards is that passport cards are not valid for international air travel; they're only acceptable for land and sea border crossings between the U.S., Canada, Mexico, Bermuda and the Caribbean. You cannot use a passport card on cruises from international homeports. (These rules do not apply to cruises roundtrip from San Juan, Puerto Rico, as the island is a U.S. territory; a government-issued photo ID and copy of your birth certificate would suffice.)

Even on a closed-loop sailing out of the U.S., if you're forced to disembark unexpectedly, need to fly home from a foreign port and only have a U.S. passport card, you can expect delays getting home. To protect yourself against emergency situations, go with a passport book, which covers all international travel -- by air, sea or land.

In addition to offering different levels of travel flexibility, price is also a major difference between a U.S. passport book and passport card.

Related: What to Do if You Miss Your Cruise Due to a Flight Cancellation or Delay

How Much Does a Passport Cost? What Does the Passport Card Cost?

Related: Do Kids Need a Passport to Cruise?

Are There Similarities Between a Passport Card and Book?

While international travel flexibility and cost are both important differences between a passport book and card, there are similarities. Both passport books and cards are valid for 10 years. Either type of passport can be used on closed-loop sailings that call at foreign ports but depart and return to the U.S. Without either document, you’d need to provide proof of citizenship (such as a birth certificate) and proof of identification (such as a driver's license).

Both passport cards and books are also acceptable on shore excursions -- such as day trips to Anguilla from St. Maarten -- that require you to show ID because you will be crossing a land or sea border into a foreign country.

Tip: During your cruise, keep your passport card or book in your cabin's safe, and simply carry a photocopy of it when walking around in port, in case of an emergency.

Do I Need to Get a Passport Book and Card?

You don't need to get both a passport card and book. In fact, doing so would mean spending more money than is necessary. A U.S. passport book provides all of the benefits as a passport card, but also works as identification to enter nearly every other country on Earth (not just those in North America and the Caribbean).

If you only have a U.S. passport card and plan on visiting countries outside of North American and the Caribbean, you'll have to purchase a passport book. In that case, you'll wind up having both (and spending more cash).

Related: What to Pack for a Cruise: A Beginner's Guide

U.S. Passport Card Vs. Book: Which Is Right For You?

For travelers on tight budgets, who cruise roundtrip from the U.S. and don't plan to leave the country by air, it can be cost efficient and convenient to carry a U.S. passport card. A passport card also could be useful for Alaska cruises, as long as all border crossings into Canada are done by land or sea.

But if you have the money to spare or anticipate traveling more frequently (and internationally), a passport book is always the best choice. In addition to being mandatory for air travel, it can offer peace of mind for emergencies. You never know when you might need to get off the ship because of an injury or illness, and arranging an unexpected flight home is much easier with a passport in hand.