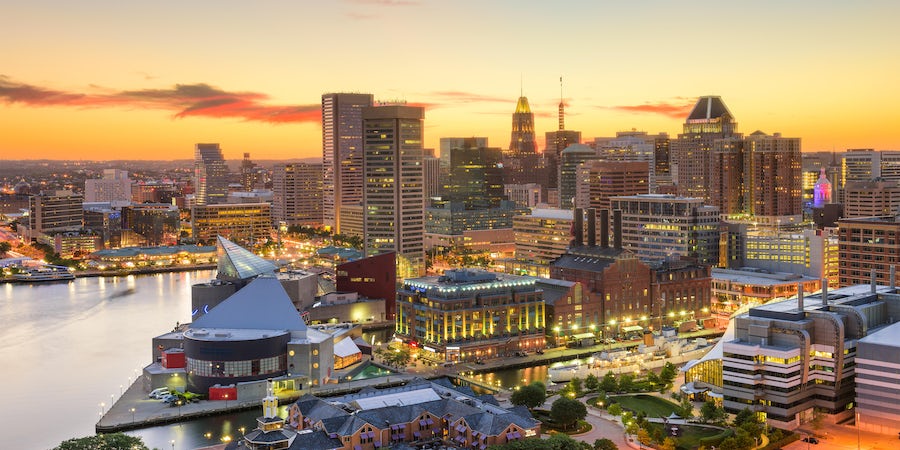 Things to Do in Baltimore Before a Cruise

Known as "Charm City" since 1975, Baltimore charms visitors with its nearly 100 distinctive neighborhoods (some only a few square blocks), open green spaces and delicious steamed crabs. As the closest East Coast port for cruisers driving from Pittsburgh, Cleveland and points beyond, it's no wonder some 200,000 of the city's visitors are there to catch a cruise. With so much to see and do in Baltimore, a one-day pre- or post-cruise visit may not seem like a lot, but we've got a few suggestions for you to help you make the most of your one day in Baltimore.

A second breakfast option is Broadway Diner, where you can find Italian and Greek specialties, as well as seafood and deli food with local touches. Try the crab cake eggs Benedict, crab braided soft pretzel (soft pretzel topped with jumbo lump crab meat and melted cheddar cheese) or their Charm City take on chicken and waffles (Maryland ranks eighth in the country in chicken production and sales). Broadway Diner is open 24 hours, so you can do breakfast in the wee hours of the morning if you'd like. (Fells Point, 6501 Eastern Ave)

Morning: Unlike the Washington Monument, forty miles to the southwest in Washington, D.C., you can climb the 227 stairs to the Washington Monument in Baltimore (during select hours). It was the first monument built to George Washington, with the cornerstone laid on July 4, 1815, shortly after the end of the War of 1812. The monument is open to visitors on Friday, Saturday and Sunday afternoons and Thursday evenings. Because the stairway is rather narrow, you must have a timed-ticket reservation, which should be reserved several weeks in advance. It is not handicapped accessible. (Mount Vernon, 699 North Charles Street)

After visiting the monument, take some time to explore Baltimore's neighborhoods, which abut each other shoulder to shoulder, with barely room for a shadow between them. Each is distinct but we recommend you start with Federal Hill, Fells Point (also spelled Fell's Point), Canton, Hampden, Harbor East and Roland Park.

If you'd rather be on the water (you are a cruiser, after all), hop the water taxi that navigates the harbor. It stops at 16 landings, including the aquarium, Harborplace, Science Center, Rusty Scupper, Pier Five, Harbor East, Maritime Park, Locust Point, Fells Point, Captain James Landing, Canton Waterfront Park and Fort McHenry. The boat operates weather permitting, and the schedule varies depending on the season, but usually starts at 11 a.m. weekdays and 10 a.m. on weekends.

Lunch: There are countless restaurants that spotlight local cuisine. Two to consider are the Thames Street Oyster House with an extensive raw bar, traditional seafood from the mid-Atlantic to New England, and upstairs waterview dining (Fells Point, 1728 Thames Street) and Lexington Market (open in 1782), just a few blocks up from the Inner Harbor (and on the Light Rail line), where you'll find Faidley's crab cakes, fresh seafood and a variety of international selections. (Downtown, 400 W. Lexington Street)

Afternoon: Baltimore is blessed with three extraordinary art museums. The Baltimore Museum of Art (Charles Village, 10 Art Museum Drive), three miles north of the Inner Harbor (take bus route 3 or 11 to get there), is free to visit and showcases the extraordinary collection of sisters Claribel and Etta Cone, with works by Matisse (largest collection in the world), Picasso, Pissarro, Courbet and Degas. Also free and near the Inner Harbor is the Walters Art Museum (Mount Vernon, 600 N. Charles Street, stop 307 on the Charm City Circulator purple route) where you'll find an encyclopedic collection of art from the third millennium B.C. to the early 20th century. The third museum is the American Visionary Art Museum (Federal Hill, 800 Key Highway) just south of the Inner Harbor (stop 404 on the Banner Route of the Circulator). Here you'll find inventive interpretations of our world (real and otherwise) by artists who are self-taught.

Afternoon Drinks: Baltimore is rapidly becoming a microbrewery mecca. The Brewer's Art, Union Craft Brewing and Heavy Seas Beer are just three of the city's popular microbreweries. The upscale Brewer's Art is based in a Mount Vernon townhome (1106 North Charles) with a bar and dining room and specially designed beer taps; Belgian-style beers are brewed according to the season and zodiac. Heavy Seas Beer, founded by Hugh Sisson in 2003, keeps the regulars coming back to the alehouse with its pirate-themed beers. Check for happy hour and weekly specials like $1 oysters, small plates and IPA tastings. (Little Italy, 1300 Bank Street) Union Craft Brewing is young by comparison, yet offers beers that sound like they could have been in Baltimore forever. There's Duckpin Pale Ale, Anthem Golden Ale and Pregame English-style Mild. Come for the beer, buy a souvenir and take the tour. (Woodberry, 1700 Union Avenue)

Dinner: In a town of seafood restaurants, you have to be special to stay in business. Ryleigh's Oyster qualifies. They just might have as many accolades as they've shucked oysters. The raw oyster bar will instill gustatory memories forever in your brain, but for those who don't like to slurp, you also can have your oysters fried, char-grilled or in a Po' Boy. If you're not an oyster fan, they've got a full menu of other entrees to choose from. (Federal Hill, 36 East Cross Street)

Evening: Just because the sun goes down doesn't mean your one day in Baltimore is over. Once the sun sets, lights go up all around the city. Tourists crowd the bar scene at Power Plant Live, while locals catch a summertime game at Orioles Park at Camden Yards, a movie at the Charles or performances in the Hippodrome Theatre (Broadway road shows). Other evening options include concerts and theatrical productions at the Modell Performing Arts Center at the Lyric Opera House or Pier Six Concert Pavilion.