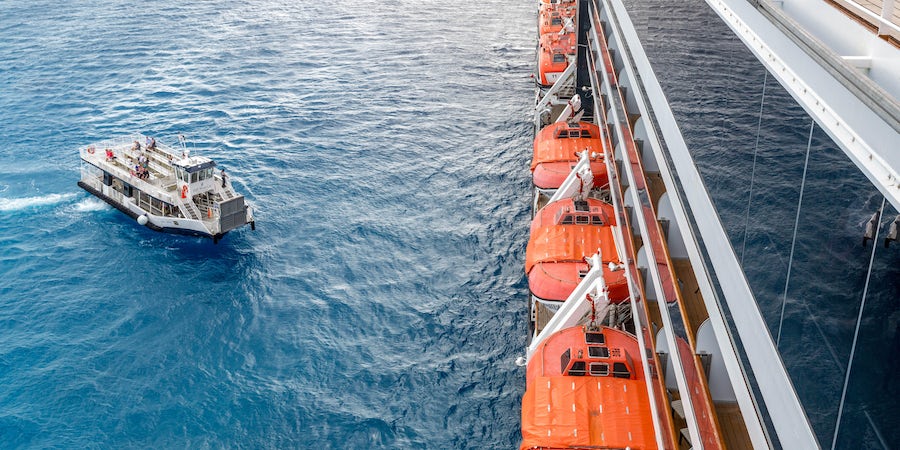 Docked vs. Tendered: Two Ways to Get Ashore

While it's true that some mega-ships are designed as destinations in themselves, one of the most exciting parts of cruising is disembarking your vessel to do some exploring ashore. But how do you get there, exactly? There are two main ways that cruise ships transfer their passengers to land: docking and tendering. Below we compare the two methods of debarkation and tell you how being docked versus tendered can affect your cruise experience.

Similarities Between Docking and Tendering

Obviously, both tendering and docking will allow passengers to head from the ship to shore. Both also require standard exit procedures, which involve the swiping of your onboard card as you leave the ship, and standard reboarding procedures, which might involve waiting in line at peak times, but that's basically where the similarities end.

Differences Between Tendering and Docking

The first -- and most common -- type of debarkation is docking, when a vessel ties up at a pier and cruisers exit the ship with the help of a ramp or gangplank. The second, tendering, takes place when no pier facilities are available or when the water is too shallow for ships to get closer to shore. Vessels drop anchor a short distance away and use small boats, called tenders, to shuttle passengers to terra firma. Although most tender rides are generally short in duration, the boats are tiny and often stuffy, which might be unpleasant for some passengers prone to seasickness.

Being tendered versus docked can present some issues that might prevent cruisers from fully enjoying ports in which ships don't pull right up to a pier. Tendering can be dangerous in bad weather; if the seas are too rough near a particular tender port, your ship might be forced to skip the call altogether. Although far less frequent, there can be weather-related complications associated with docking, as well -- particularly when there are high winds, which can make it difficult for ships to pull up alongside the pier area.

Because tender boarding often involves steps and small openings, it can be difficult for passengers with limited mobility to board and exit tender boats. Plus, the bobbing of the tenders in the water can sometimes throw people slightly off balance. In some cases, those passengers might be forced to stay onboard in ports where tenders are required. While docking doesn't involve steps or minimal clearance like tendering, it does have its own set of difficulties for anyone not able to navigate steep gangways. Crewmembers are typically available to help those who might need an extra hand.

Because tenders can only carry so many passengers at a time, the stream of people exiting the ship on a tender day isn't as steady as it is on a day when the vessel docks. Ships try to alleviate potential crowding at the gangway by allowing those who've booked shore excursions to leave the ship first. There's usually a color-coded or numbered ticketing system to help with the process. (You're allowed to disembark when they call your group.)

On the way back, though, it's every person for themselves since some folks stay ashore all day, while others head back onboard after only a couple of hours. Although there are often several tender shuttles running simultaneously, there can still be long lines to get from shore to ship. While lines can also form when a ship is docked, the flow is likely to be more steady.

There are pros and cons to being tendered versus docked. Tendering is slightly more inconvenient, particularly if you're in a hurry or have mobility issues. Weather is more likely to prevent passengers from getting to shore in a tendering situation; on the other hand, you have a fun opportunity to ride on a boat and even take some great photos of your ship. Docking is much more efficient and more common, though it can create lines and tricky maneuvering for less mobile passengers. If you have a preference for one type of debarkation over another, it's best to learn about the ports on the cruise you're researching before you book.