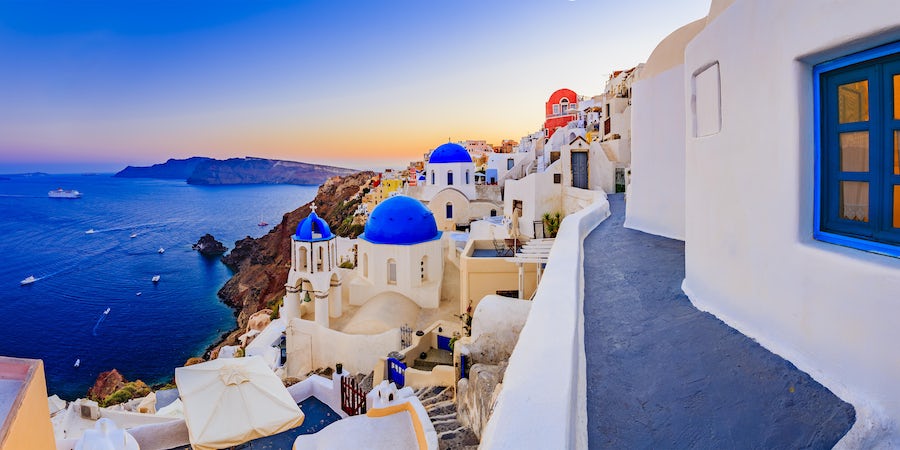 Perhaps no islands in the world have been photographed as much as the popular Greek isles of Mykonos and Santorini. White-washed buildings against volcanic landscapes, quaint old-fashioned windmills, blue church domes against an equally cerulean Aegean Sea -- both ports provide scenery beyond compare.

Many Eastern Mediterranean cruises or Greek Island cruises include stops at both Santorini and Mykonos, which means you won't have to make a choice. But if your itinerary stops at only one of the islands, here is our breakdown of Santorini versus Mykonos.

Similarities Between Santorini and Mykonos

Both Mykonos and Santorini have eye-catching white buildings, so painted to reflect the powerful sun, as well as many souvenir shops, restaurants, bars and -- because the islands are so popular --- fellow tourists. As many as five or six cruise ships can call at each island per day in the summer season; expect crowds. Note: Cruise ships dock in Mykonos (though if no space is available, they will anchor and tender passengers to port), while Santorini requires all cruise ships to tender.

Both islands also have plenty of water sports if you want to do more than lie on the beach. Catamaran excursions are popular on both islands.

Differences Between Mykonos and Santorini

Set high on cliffs overlooking a volcanic caldera, Santorini's villages win for scenery. The town of Oia is world famous for its sunsets; this is where you'll find the blue-domed churches that you've seen in so many photos. (There are also many art galleries here selling representations of the famous view.) In addition, Santorini has wineries that produce a fairly decent tipple.

Mykonos may be at sea level, but it's also picturesque. Quaint windmills dot its shore, and the beaches are beyond compare. Mykonos is also famous for its restaurants and nightlife, but don't worry if you're not a party animal; the ancient ruins of Delos are just a daytrip away.

Choose Santorini if you're a photographer and you simply must get the Oia beach shot; you're an art collector and want a special piece from your Greek island adventure; or you're a wine lover who wants to explore some of Greece's best wines. (Santorini is a bad choice, however, if you have excessive mobility issues.)

Choose Mykonos if you love energetic tavernas and cafes; you are a beach bum who has made a point of going to the world's best; or you're a history lover who can't imagine going to Greece without seeing Delos, where Apollo and Artemis were born.

Ultimately, while we love Santorini, we think that it's a better choice for a land vacation, when you can explore Oia and Fira without the crowds and catch the sunset. On a cruise, Mykonos wins.