You may also like
Dismiss
Pizzeria Del Capitano on Carnival Cruise Line
Cruise Vision 2020: The Future of Cruising in Australia and New Zealand
5 Reasons to Love Seabourn Cruises in Alaska
The Most Exciting Ship Launches in 2020
Onda by Scarpetta on Norwegian Cruises
Cruise Policies & Inside Information
Best Cruises for a Family of 5
Are Cruise Deposits Refundable?
Will I Have to 'Social Distance' on My Next Cruise?
How Reassuring are New Cruise Cancellation Policies Really? 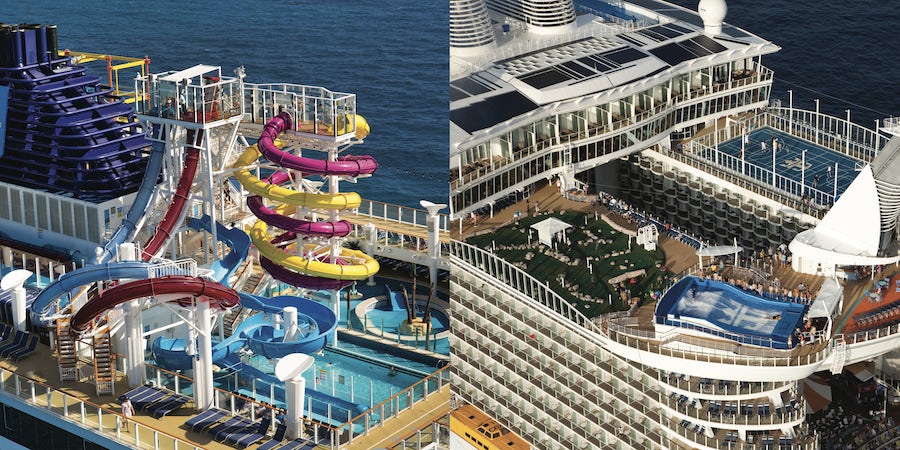 Sifting through the numerous differences between cruise lines is no small feat, often making the cruise-selection process a difficult one.

That's why we've compiled this in-depth breakdown of two of the most popular cruise lines -- Norwegian Cruise Line vs. Royal Caribbean. Check out our detailed comparison below to find the ideal cruise for your and your family's next getaway.

Norwegian Cruise Line vs. Royal Caribbean: In a Nutshell

Norwegian Cruise Line (NCL) is renowned for being a laid-back cruise line that's been based on the concept of freestyle cruising. Freestyle cruising is essentially doing what you want, when you want, including no set dining times, nor fixed expectations around dress codes. This line also offers more for-fee dining options than most other cruise lines.

The Norwegian Cruise Line fleet has 17 ships (and will soon be 19 when two Prima-class ships join in October 2022 and 2027). The fleet is divided into eight classes, all of which have been built or refurbished since 2015.

Royal Caribbean International has 26 ships that are divided into six classes. Five of these ships were built before 2000 and four more ships are on order to join the fleet.

Grandeur of the Seas was the first of the Royal fleet as it was constructed in 1996, making it the oldest Royal Caribbean ship.

While both Royal Caribbean and Norwegian Cruise Line ticket prices are within similar ranges, there are some differences between the way each line approaches cruise fares.

Both Norwegian Cruise Line and Royal Caribbean cater to families and couples, though NCL does a better job of catering to solo travelers, thanks to its unique Studio staterooms designed for one.

While aboard nearly any Norwegian cruise ship, you'll mostly see families, couples and singles that range in age from their 30s to 60s.

Royal Caribbean cruise ships attract a similar crowd as Norwegian: families, couples and singles in their 30s to 60s.

The most common age range aboard Royal Caribbean ships is low 40s. However, the typical age range is slightly lower on shorter cruises and a bit higher on cruises of 10 nights or more.

Both Norwegian Cruise Line and Royal Caribbean offer plenty of U.S. homeport cruising, along with international itineraries departing from the U.K., Europe and more.

NCL has 14 homeports on the North American mainland where ships depart seasonally to year-round. They offer several itineraries, including the Caribbean, Bermuda, Bahamas, Mexico and Alaska.

NCL and Royal Caribbean cabins come in various configurations and choices to suit every budget and preference.

NCL cabin categories come in an impressive range, even on the smaller ships. The sizes are typical of industry standards, though balconies on the Breakaway and Breakaway Plus Classes are notably small (226 square feet).

Royal has numerous cabin categories available. Depending on the ship, these accommodations can include inside cabins with picture windows overlooking the Royal Promenade, balconies with front-row views of the AquaTheater (on Oasis-class ships), rooms sized for just one person and massive duplex suites.

Both Norwegian Cruise Line and Royal Caribbean offer a multitude of dining options, especially on their newest ships. Not all dining venues are free, however, and many require reservations in advance.

Thanks to “freestyle” dining, you can eat at any onboard restaurant at any time during open hours. However, reservations may be required and fill up fast for the most popular restaurants.

Traditional fixed seating times or flexible “My Time” dining options are available onboard Royal Caribbean for main dining rooms as are reservations for specialty dining. The larger the ship, the more restaurants and overall dining options there will be at your disposal.

Pool deck attractions aboard Norwegian Cruise Line and Royal Caribbean are plentiful, particularly aboard their newest and largest ships.

Some Norwegian ships have slightly crowded pool decks (Breakaway Class, Norwegian Epic), but they make up for the congestion with a wide variety of bonus water features.

Royal Caribbean has some of the most elaborate pool decks in the cruising industry, but didn’t embrace the full waterpark concept until more recently. Now, the line’s newest ships offer more bells and whistles than a shoreside resort.

Those who want to remain active will find plenty of diversions aboard both Norwegian Cruise Line and Royal Caribbean.

Norwegian was the first to really elevate its sports decks, placing full-scale go-kart raceways in addition to ropes courses and laser tag arenas in outdoor spaces. Plus, with every new ship, the line expands its inclusions (some of which cost extra).

Royal Caribbean is well known for its FlowRider surf simulators, but the line has gone on to extend its long list of activities. Royal now showcases its RipCord by iFLY skydiving simulators as well as North Star crane pods, many of which are free.

Inside both Norwegian Cruise Line and Royal Caribbean cruise ships is a multitude of enriching activities to pass the time.

Indoor fun on a Norwegian cruise begins with trivia, bingo, dance classes and both beer and wine tastings and further extends to:

NCL is one of the brands to expand from only musical revues to also remounted stage shows direct from Broadway. Its entertainment offerings, which are subject to change, include the following and more:

Royal Caribbean upped its entertainment ante by introducing Broadway and London West End productions into the mix on its newer ships. Its entertainment offerings, subject to change, include the following and more:

Both Norwegian Cruise Line and Royal Caribbean are geared towards family-friendly fun and have various dedicated kid's programs and activities. However, the most elaborate facilities are always found aboard the line's largest and newest ships.