You may also like
Dismiss
Cruise Gives Teenagers First Taste of Freedom
How to Make Friends on a Cruise
10 Things You Should Never Do on a Cruise Line Private Island
6 Ways LGBTQ Cruisers Can Stay Safe on a Port Stop in Jamaica
7 Things to Know About Holiday Singles Cruises
Why You Should Buy 'Cancel for Any Reason' Insurance for Your Cruise
Cruise Activities You Can Re-create at Home: Virtual Cruising and Meetups
Pictures From the Ultimate Disco Cruise
Why Germ-Zapping Robots and AI Technology Could Be the Future For Cruise Ships
Will I Have to 'Social Distance' on My Next Cruise? 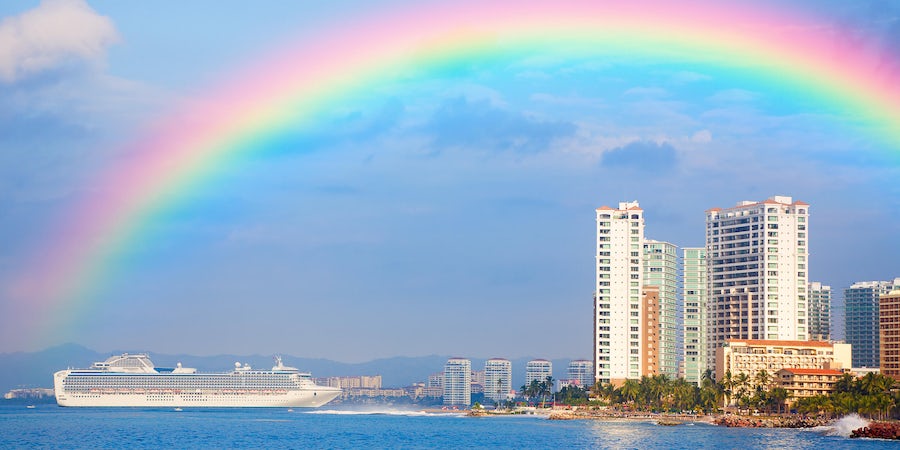 What Is a Friend of Dorothy on a Cruise Ship? Exploring LGBTQ+ Meetups at Sea

It used to be common to see a Friends of Dorothy (sometimes abbreviated as FOD) meetup listed in your cruise ship's daily newsletter, usually grouped among singles meetups, Friends of Bill W. and maybe even a bridge club.

Recently, these meetings have begun to disappear, leaving cruisers to ask: What is a Friends of Dorothy meetup? Who's Dorothy? And, where have her friends gone?

The answer is that "friends of Dorothy" is a code name for people who identify under the LGBTQ+ spectrum: lesbian, gay, bisexual, transgender and all other members of the queer community. With more openness around sexuality, the antiquated term Friend of Dorothy is out, and LGBTQ+ events at sea are labeled with clear language on most major cruise lines.

Members of the queer community continue to enjoy cruise vacations. If you're among them, here's everything you need to know about LGBTQ+ meetups at sea.

The History of the Friends of Dorothy

The evolution of the term "Friends of Dorothy" reaches back more than half a century. The term came into popular use in the 1950s as gays and lesbians developed a special connection with the musical icon Judy Garland, whose relentless spirit and tragic history mirrored their struggles in everyday life.

Garland's most famous role -- as the ever-optimistic and wistful Dorothy in the 1939 classic "The Wizard of Oz" -- gave gays and lesbians a "secret" code word that they could use to refer to themselves. At cocktail parties or company gatherings where one could not be comfortably "out and proud," gays would inquire discreetly of each other, "Are you a 'Friend of Dorothy'?" The wink-wink admission of "I am, too!" would likely lead to fast bonding in an age when gay bars were clandestine and, in some cases, dangerous.

Friends of Dorothy meetings began popping up on some cruise ships' daily programs in the late 1980s as gay passengers began to seek out more social meetings with their own affinity group. They wanted an easy way to identify and socialize with other queer travelers on large ships.

These meetings occurred sporadically at first, dependent on the vagaries of the cruise lines' changing policies and the whims of individual cruise directors. As gays and lesbians gained more acceptance and visibility, these meetings began appearing with more regularity.

Now most major cruise lines have official policies to host and publicize these meetings on as many of their ships as possible, and have dropped the cryptic Friends of Dorothy term for more descriptive names, such as "LGBT get-together." Of the major cruise lines, only Silversea still uses the term Friends of Dorothy to refer to its meetups for gay, lesbian and queer passengers.

What Happens at LGBT Meetups?

LGBTQ+ meetups are most commonly a casual cocktail party at one of the ship's bars or public rooms, sometimes with complimentary drinks and a member of the ship's social staff (an out staff member, if possible) on hand to get the conversations started.

Ideally, the cruise director will offer the LGBTQ+ meeting early in the cruise and on more than one day, to give everyone who wants to attend more options.

The gatherings are great for making new friends who can then join you for dinner, drinks or shore excursions throughout the trip.

Do All Cruises Have Friend of Dorothy/LGBT+ Meetups?

Though the LGBTQ+ meetups may go by different names, you're likely to find most large cruise lines have some type of get-together. After surveying the major cruise lines, we've discovered cruise lines are divided into the following three categories with regard to LGBTQ+ meeting policies:

Multiple LGBTQ+ Meetups on Every Sailing: Celebrity leads queer experiences at sea, with fleetwide first-night LGBTQ+ Welcome Parties on almost every cruise. In addition, Celebrity hosts various LGBTQ+ events and social hours on a majority of its cruises and has a dedicated section of its website addressing its LGBTQ+ passengers.

One Official LGBTQ+ Meetup on Every Sailing: Cruise lines that designate one LGBTQ+ meetup per sailing include Norwegian, Holland America, Carnival and Princess Cruises, and the upscale lines Azamara, Crystal, Cunard and Seabourn. Silversea does as well, but is the last remaining line to designate its LGBTQ+ gathering as a Friends of Dorothy event.

Related: What Should I Wear on a Cruise? A Guide to Cruise Line Dress Codes

All of these cruise lines may omit LGBTQ+ meetings on a cruise for various reasons, such as scheduling, with no slight intended.

No Official LGBTQ+ Meetup: Some of the high-end lines, such as Regent, Ponant, SeaDream Yacht Club, Windstar and Oceania, do not offer official meetups onboard. Because of their smaller, more intimate sizes, these cruise lines rarely feel it's necessary to offer LGBTQ+ get-togethers (or most other special-interest meetings) because cruisers run into like-minded passengers every day on these social ships.

It's surprising to find Royal Caribbean as an outlier among the other major cruise lines listed above, with an official policy to not formally organize LGBTQ+ meetings. Instead, Royal Caribbean advocates for all passengers to create their own get-togethers and designate their preferred meeting times and places. Head to the "bulletin board" near Guest Relations to create your own LGBTQ+ meetup or look to see if someone else has beat you to it.

Do LGBTQ+ Meetups Signal That a Cruise Will Be Gay-Friendly?

Cruising culture is designed to be as inclusive as possible. Diversity is a hallmark of cruising as passengers and crew from all backgrounds unite in the shared experience of travel. As for LGBTQ+ travelers, a designated meetup can be a welcome tip-of-the-hat that you're not alone.

Related: Why Celebrity Cruises Is a Great Choice for LGBTQ Cruisers

However, it would be misguided to say that homophobia does not exist at sea, and how welcoming a ship feels can have more to do with who's onboard a particular sailing, rather than anything the line does in an official capacity. Certain lines do get higher marks than others for being welcoming to LGBTQ+ passengers; consider starting your cruise planning with those companies.

Lines including Celebrity, Royal Caribbean, Norwegian and Holland America regularly host entire-ship charters for the gay and lesbian markets, for which their officers and crew undergo custom LGBTQ+ diversity training. This training carries over onto regular cruises with gay passengers and can help make a ship seem more gay-friendly.

Why Did No One Show Up to the Meetup on My Cruise?

The biggest complaint from frequent gay cruisers is that turnout is often sparse at LGBTQ+ meetups. Yet when asked why he never attended a meetup, one-half of a gay professional couple that cruises at least once a year replied, "I don't need any gay meetings." Not every gay cruiser wants to socialize with other out travelers, and some don't want to be social at all. After all, just because you're both gay doesn't mean you have much in common with some stranger you've just met.

Related: Why Celebrity Cruises Is a Great Choice for LGBTQ Cruisers

In addition, some couples organize their own private LGBTQ+ parties in their staterooms for select friends -- and some lucky new acquaintances they've made around the ships. They prefer more private events to the official meetups.

Another reason for sparse turnout is that gay passengers onboard may have forgotten about the meeting in the midst of a competing seminar or spa treatment or the beckoning waters of the pool. With so much going on onboard, drinks at a designated time might not make the cut as travelers plan their day on the ship.

Can I Arrange My Own Meetup?

Arranging your own meetup depends on the line, and most lines are not able to accommodate passenger-led meetups, particularly listing them formally in their schedules and providing a specific space. Royal Caribbean remains the one line that solely depends on passengers to create and organize their own LGBTQ+ meetups on each sailing by posting a notice on a bulletin board near the Guest Relations desk.

If you're on a cruise that doesn't have a LGBTQ+ meetup and you'd like to set one up, it's good to note that cruise directors are often keen on accommodating special requests. Don't be shy in advocating for arrangements to gather friends -- new and old -- for activities, drinks and dinner.

The lines that do allow passenger-led meetups in addition to having their own LGBTQ+ meetups include Cunard, with an affirming fleetwide commitment to be accommodating with spaces and service to LGBTQ+ folks, and some of the smaller lines like Seabourn and Silversea.