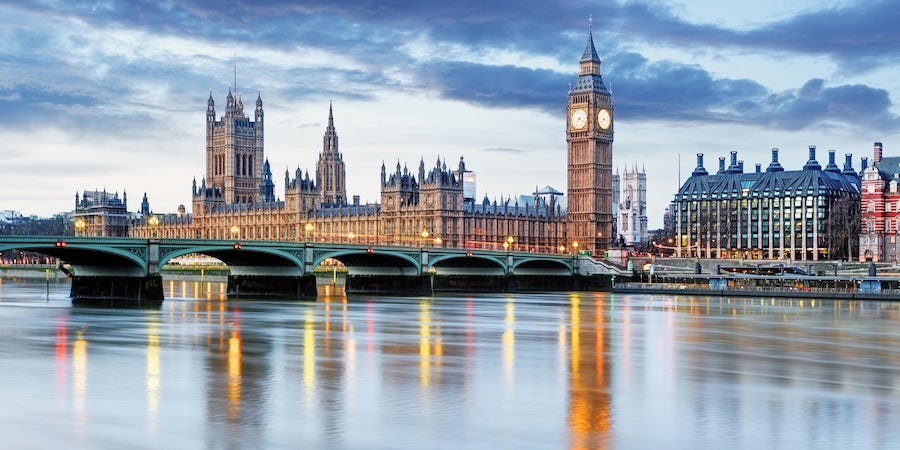 Think of a Thames River cruise, and the historic cityscape of London immediately pops to mind: the ethereal spires of the Palace of Westminster and its iconic clock, Big Ben, the shadowy fortifications of the Tower of London and the domed edifices of the Christopher Wren-designed St. Paul's Cathedral.

But the Thames is not just a metropolitan river of commerce. In addition to serving well-heeled residents whose purposeful polished shoes trod its concrete-lined London banks, the Thames also plays a pastoral character, burbling alongside villages and quaint country lanes.

The Thames River wends for 215 miles through eight counties, from the Thames Head in Gloucestershire's Cotswold Hills near the towns of Kemble and Cirencester to its estuarine mouth on the North Sea at the resort village of Southend-On-Sea. And the river's path takes it through notable and historic towns -- including Oxford, Reading, Windsor and Eton -- on its way to London and the coast. The last 55 miles of the Thames River -- between the Thames Estuary in Southend and the river's first set of locks in Teddington -- are tidal and free of the locks that limit the length of ships using the river in its upper reaches.

The Thames River is open to cruising for all but about 25 miles -- between Lechlade Bridge and the Thames Head. Riverboats measuring 100 feet in length and with a three-foot draught can fit safely through the locks and under the bridges up all the way to Lechlade. Past that, it's small boats like canoes and kayaks, only.

The Magna Carta operates river cruises from March to the end of October. Summer months are warmest, but with Britain's notoriously changeable weather, warm, sunny days are not guaranteed.

While boats continuously traverse both the tidal and non-tidal waters of the Thames River, it is not often on the itinerary for river cruise ships. The majority of cruises available on the Thames River are day cruises on larger boats taking in London's historic sights. River enthusiasts can find overnight cruises up to a week in length on luxury barges like European Waterways' eight-passenger, 117-foot Magna Carta.

Magna Carta offers a standard seven-night cruise from Hampton Court Palace in west London to Oxford and the reverse on alternate weeks. The itinerary's (and the ship's) pace is relaxed, and itineraries are flexible and subject to change. A typical itinerary would offer activities like traditional English cream teas, trips to ancient estates such as the 11th-century Windsor Castle and plenty of hours to while away at a leisurely pace pottering along on the Thames River. The ship also offers themed cruises, with a specific itinerary that includes a visit to Highclere Castle, setting for the television series "Downton Abbey."

If your primary reason for cruising is to take in the history of the British Isles, there are a number of ocean-going cruise lines that offer itineraries around Britain. Take a look at our British Isles Cruise Basics for more information.

If you're in it for the barging experience, European Waterways and others offer a variety of canal cruise itineraries in France, which our French River Cruise Basics describes in detail.)

And if it's a larger river boat you're after, check out our river cruise section to learn about the ships offering cruises on the Rhine River, Danube River and more.