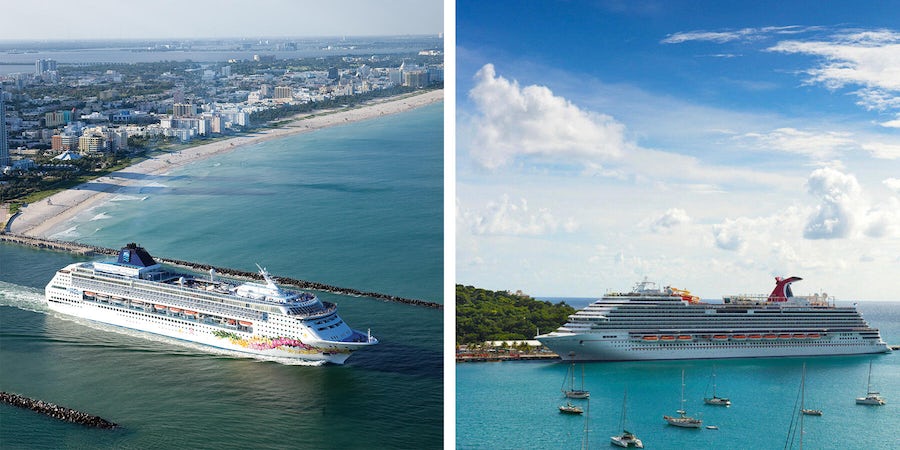 Casual, family-friendly cruise line, known for its signature “Fun Ships,” for the budget-conscious who appreciate a we-don't-take-ourselves-too-seriously vibe. The ships are unquestionably playful vessels where guests of all ages can let their hair down and enjoy an excellent value proposition, thanks to a wide range of included activities, food and entertainment. Newer ships boast innovations like the SkyRide (a midair, suspended bike course) and Bolt (full roller coaster at sea).

“Freestyle” cruise line designed for those that want a larger choice of dining and entertainment options, even if it requires paying more for them. Even though the ships have lots of la carte extra-cost activities and dining, there’s still plenty that is bundled into the base fare. Norwegian is always pushing the limits of what can be placed on a cruise ship, from ropes courses to go-kart raceways.

Carnival has one of the largest fleets at sea, with several classes of ships, each offering its own spin on fun. The newer ships tend to be larger, with more amenities.

While Norwegian’s fleet is not as large, the line has more breadth in passenger counts – meaning you have more choices among size of ship. Some of Norwegian’s newer ships are actually smaller, a move that the line sees as making the experience more upscale.

Carnival vs. Norwegian: Pricing and Cost

Carnival offers some of the lowest cruise fares available, making for an exceptional value

• Most entertainment included (exceptions are the 3D Thrill and IMAX theaters, which are only available on select ships)

• Pricing includes less than half of the restaurants offered onboard

• Most entertainment included (exceptions are lunch and dinner theaters, which are only available on select ships)

Norwegian vs. Carnival: Demographics and Who is Onboard?

Both lines cater to similar demographics. With more homeports spread throughout the US, Carnival’s ships often draw people from states close by who can drive to the port, while more people usually fly to catch a Norwegian cruise.

• Families, friends, couples and singles in their 30s to 60s

Carnival is known for having the most U.S. homeports, making them an economical choice for people or families who wish to drive.

Related: When a Passenger Dies at Sea: What You Need to Know

• Sails out of 14 departure ports on the North American mainland on a seasonal or regular basis, if not always year-round

• Is back to sailing in Europe and Australia as well

• Exotic itineraries include the South Pacific and Papua New Guinea

Norwegian’s fleet is generally spread across more international homeports and has less of a focus on smaller U.S. homeports than Carnival.

• Sails out of 14 homeports on the North American mainland, plus Puerto Rico on a seasonal or regular basis, if not always year-round

• Only big-ship line to sail year-round from Hawaii, doing all Hawaiian islands cruises

Carnival has spacious standard cabin sizes, among largest in the industry.

• Thirteen ships have spa cabins that include free fitness classes, access to the thalassotherapy pool and select discounts on spa treatments

• Has limited family accommodations, including some cabins with connecting doors on most ships; largest selection of Family Harbor staterooms and suites (insides, oceanviews and balconies that can hold up to five people) can be found on the Vista and Excel (Mardi Gras, etc.) classes of ships (including exclusive access to the Family Harbor Lounge)

Cabin sizes on Norwegian are in line with industry standards, though balconies on some of the newest ships are notably small.

• Lots of cabin categories to choose from, even on the smallest ships

• Twelve ships have a top-deck Haven suite complex with exclusive key-card access to a private courtyard and pool; of these ships, eight also have a private lounge and dining room

• Seven ships have spa cabins, all of which feature calming decor and include free access to the onboard saunas and steam rooms

• Extensive selection of family cabins, including suites, oceanviews, balconies and inside options

Carnival offers one of the most accessible and consistent array of dining at sea with something for everyone, from poolside comfort foods to elegant steakhouses. To that end, the line offers both fixed and flexible dining options, as well as:

• Ships have a handful of specialty restaurants. Some -- like Guy's Burger Joint and BlueIguana Cantina -- are included in the cruise fares; others cost extra; most ships feature just three to four specialty restaurants, but newer ships, especially Mardi Gras onwards, have more

• At least one formal night per cruise, on which passengers are encouraged to dress up for dinner

Following the “freestyle” format, there are no set dining times and you can eat in any of the main dining rooms at any time during open hours aboard Norwegian. Just keep in mind that reservations may be required and fill up quickly at the most popular restaurants. Among those dining options are these:

• All ships have a pub/restaurant or diner that is open 24/7, in addition to complimentary buffets and main dining rooms for breakfasts, lunches and dinners

• Every ship has four or more extra-fee specialty restaurants that might include a steakhouse, Italian, French, Japanese hibachi and Brazilian, as well as sushi; most are priced a la carte

Carnival has always been about pool deck fun and features some of the most elaborate water areas, parks and slides of any cruise line encompassing:

• All ships have at least one main pool; many also have aft pools, some of which are adults-only

• The top-deck WaterWorks, found on 20 ships, features a variety of water slides

• Lots of food and drink venues around the pool deck, including RedFrog Rum Bar (a double-decker tiki bar on Mardi Gras and Carnival Celebration),Guy's Burger Joint and the BlueIguana Tequila Bar

Norwegian ships in the Breakaway class have surprisingly constricted and crowded pool decks. However, most make up for any shortcomings with a large variety of extra water features including:

• All ships have at least one large pool or two smaller pools, as well as four or more outdoor hot tubs

• Several ships have kids pools or water parks for youngsters

• Many ships have pools with at least one slide, with eight having Aqua Parks with one or more slides (though, Norwegian Prima has more dry slides than water slides)

• Some poolside activities, but pool decks are primarily for lounging around

Carnival significantly raised the bar when it was the first to install a full-blown roller coaster — Bolt (for an added fee) — on Mardi Gras and Carnival Celebration. Of course, they still offer traditional sports varieties as well:

• Carnival Vista, Carnival Horizon and Carnival Panorama offer the SkyRide, an aerial ride and self-propelled Bolt predecessor on which riders race each other on hanging recumbent bikes around an 800-foot suspended track, some 150 feet above the sea.

Norwegian was one of the first to enhance its sports decks, placing genuine go-kart tracks in addition to ropes courses and laser tag arenas in outer areas, and with every added ship, the line expands its inclusions, some of which cost extra:

• Most ships have traditional sports courts, as well as many with golf driving nets or mini-golf

• Norwegian Bliss, Norwegian Joy, Norwegian Encore and Norwegian Prima have a two- or three-level Go-Kart racing track as well as an outdoor laser tag course (not on Prima); both cost extra to use; the ships also have a mini-golf course, but no rock climbing wall or rope course

Carnival vs. Norwegian: Indoor Things to Do

• The interactive "Hasbro, the Game Show"  is one of several specialty offerings that has since expanded to Family Feud Live on the line’s newest ships

Indoor play on a Norwegian cruise starts with trivia, bingo, dance classes, and beer and wine tastings and further extends to:

• Three ships (Norwegian Joy, Norwegian Encore, Norwegian Prima) tout the Galaxy Pavilion, an extra-cost virtual reality complex that is as much of a hit with adults as it is with kids and teenagers

• Several ships have a complimentary circus-themed escape room experience from which participants must escape within a specified time frame by solving puzzles; a pair of ships (Norwegian Encore and Norwegian Prima) feature dedicated escape rooms

Unlike other standard mainstream cruise lines, Carnival has shied away from remounting full-scale Broadway shows on its ships, instead favoring its in-house Playlist Productions kinetic revue-style performances as well as the rest:

• The onboard Piano Bar is a sing-along good time, while the Sports Bar is the spot for catching a game while having a brew

Norwegian is one of the cruise lines to expand from musical revues to add in stage shows remounted from Broadway. Its entertainment offerings, subject to swaps and updating, include the following and more:

• Nightlife spots beyond the usual bars include the Beatles-inspired Cavern Club on Norwegian Epic,Bliss, Joy and Encore;  as well as a comedy clubs on most of the line’s newest ships; vessels without comedy clubs feature comedians at least once per sailing in the main theater

• Most ships, including those with Broadway entertainment, offer musical revue-style song-and-dance shows several times a sailing

• All ships have at least eight bars located throughout

Carnival vs. Norwegian: Are the Ships Family Friendly?

• Build-A-Bear Workshop At Sea is a great opportunity for kids to craft their very own stuffed animals aboard all the ships in the fleet; and Towel Animal Theater is a cute show that brings the ships’ terrycloth friends to life on stage for the whole family to enjoy

• Nighttime baby-sitting (for a fee) with the Night Owls program

• Family Harbor staterooms and suites are available on the Vista and Excel (Mardi Gras, etc.) classes of ships including exclusive access to the Family Harbor Lounge

• The Guppies program offers play areas and activities for parents with babies and toddlers, ages 6 months to under 3 years; Guppies hosted activities and open play are available across the fleet

• Family-friendly staterooms and suites include 2-Bedroom Family Suites, as well as Family Mini-Suites, Balconies, Oceanviews and Inside cabins