You may also like
Dismiss
Cuba Cruise Tips
8 Reasons a Cruise is the Best Way to Visit Cuba
Q&A: Can Americans Travel to Cuba on a Cruise?
Cuba People to People Visa Options for American Cruisers
Which Cruise Should You Take to Cuba?
Things to Do in Havana Before a Cruise
8 Things Not to Do on a Cruise to Cuba
8 Things to Watch Out for When Cruising to China
Countries That Require Visas for a Cruise
How to Apply for a Cruise Visa 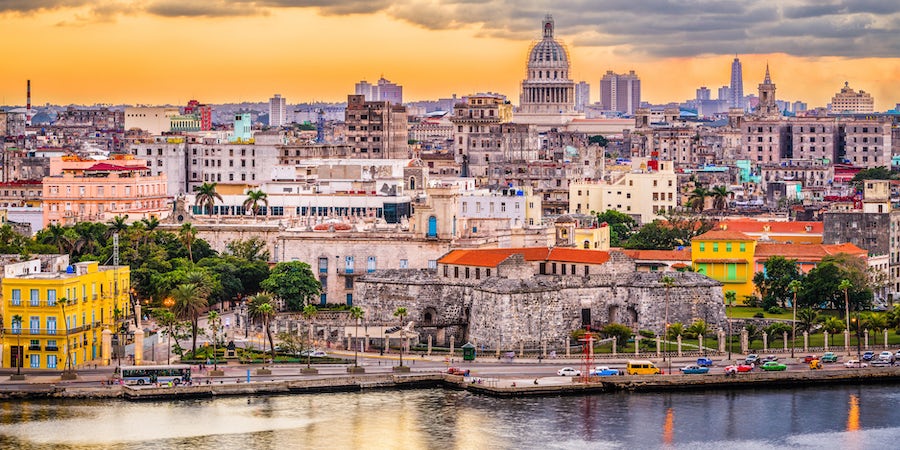 21 Tips for Americans Traveling to Cuba on a Cruise

It wasn't all that long ago that the idea of Americans traveling to Cuba seemed like a pipe dream. For more than 50 years, the U.S. trade embargo against the Caribbean's largest island meant that, even as the rest of the world could experience Cuban beaches, culture and music, Americans were shut out from traveling to Cuba, at least by sea.

No longer. In January 2015, President Obama lessened the restrictions on visits between the two countries, giving more options to Americans traveling to Cuba. (For more on the current status, read our Cuba Cruising Q&A.)

Although the embargo will have to be lifted in its entirety for Americans to visit Cuba simply to go on a beach holiday, no U.S. regulations prohibit cruise ships from visiting (at this point, it's the Cuban government that has been turning down requests from companies to dock). The one stipulation for Americans cruising to Cuba is that they must get a people-to-people visa, either through the cruise line or self-certify that they are doing activities that are educational or cultural in nature.

While international travelers have been visiting Cuba for years, a cruise there is still a relative novelty for Americans. Because the embargo remains in place, though -- and will be until Congress lifts it -- there are some slight differences that American cruisers will experience when they cruise, compared with their international counterparts. Here are a few things Americans should keep in mind while booking a cruise to Cuba.

Related: Anatomy of a Cruise Carry-On

As the regulations stand right now, all Americans who cruise to Cuba still need to prove that their trips fall under 12 accepted forms of cultural and humanitarian exchange. Cruise ships that carry Americans have set up their sailings so passengers will be able to meet the people-to-people visa requirements (one of the 12 accepted forms).

But it's easier now.

It used to be that Americans traveling to Cuba had to get people-to-people documentation in advance and stick rigorously with their tour group. Now, Americans can fulfill the people-to-people requirement in several ways: either by taking the excursions and doing the activities onboard offered by the cruise line or "self-certify" that they are spending their time in the country doing educational and cultural activities. The only catch? You are supposed to keep written records, such as a journal, about what you did for at least five years.

And no one checks.

The likelihood that U.S. Customs will ask you for this documentation is slim. Still, you should keep documentation, just in case.

You can get your passport stamped.

A pleasant surprise for those who dream of a fat passport: When you come into a Cuba airport legally through People to People, you can go ahead and tell the Cuban border control to stamp away. (Because so many Americans have traveled to Cuba illegally through Mexico and Canada over the years, you might be given a choice.) If you board your ship in Miami, the cruise line will have your passport stamped for you.

Hold on to your tourist card.

When you enter Cuba, the cruise line will issue you a tourist visa. Fill out both sides. Customs will stamp it and then take one side, leaving you the other. Keep this in a safe place, along with your passport, as you'll be required to return it when you leave.

With two separate systems in place, Cuban currency can be complicated. It's best to exchange as soon as you arrive. You'll get a far better rate with Canadian dollars, euros or British pounds than you will with U.S. dollars. Add in the extra 10 percent the government imposes on U.S. dollar exchanges, as well as the 3 percent that the exchange bureau imposes, and Americans end up paying a premium -- receiving 87 cents per dollar. If you have the ability to bring euros and Canadian dollars into the country instead, it's better for you financially to do so.

Forget about credit and debit cards.

Although some financial practices between the U.S. and Cuba have loosened, most U.S. banks still do not allow their cards to be used in Cuba and there are no ATMs. Bring cash, if you can, for purchases off the ship.

Related: What to Expect on a Cruise: Using a Cell Phone

While Cubans do have mobile phones, American cells won't work, unless they're unlocked and you buy a SIM card. (The shortest lines are at the Havana airport.) International phones purchased in Europe and Canada do work, but you'll pay hefty roaming fees.

Ever wonder how you lived without internet? Visit Cuba, where service for tourists is nearly nonexistent. Havana and other cities are beginning to build Wi-Fi hotspots, but it's not like other Caribbean islands where all resorts and hotels have free internet. Luckily, cruise ships do have internet and Wi-Fi onboard, but it can be slow.

The people-to-people regulations specifically say that American visitors are in Cuba to learn, not to laze on the beach. All cruise lines that go are required to offer educational, cultural, artistic or humanitarian activities to meet the guidelines.

Cruise lines are doing this in various ways. International Expeditions and Vantage have a full schedule that includes visits with musicians, artists, farmers, naturalists and other cultural activities.

But no one checks.

Related: 12 Tips To Help You Ace Your Cruise Embarkation Day

If you're cruising an international line and you want to skip the educational walking tours in favor of snorkeling, you can. Americans are allowed to sign up for the same shore excursions as everyone else -- and there are no people-to-people police to make sure you're learning.

Ditto for American lines. No one onboard is going to monitor whether or not you spent your time in Havana visiting a community project or sitting in a cafe. If you do want to explore on your own, however, you should make sure you check the "self-certify" box on your people-to-people visa. That way, the onus is on you and not the line.

So far, no cruise line has sent a shiny newbuild to Cuba. The ships that sail there have 1,000 passengers or less, as the ports can't take bigger vessels. If you require pampering in luxurious surroundings with fancy water slides, elaborate fitness centers and full casinos, these cruises are not for you.

But remember where you are.

Cuba is a communist country, where rations are a way of life. Basics that Americans take for granted -- toilet paper, for example -- are scarce, and families scrimp to make ends meet. Many homes lack consistent running water, and women on the street ask tourists for toiletries. The small amenities you're missing on your cruise ship are nothing in comparison.

No Starbucks for you.

Related: Where Can You Get Your Starbucks Coffee Fix on Royal Caribbean? We Spill the Beans

One of the most striking things you'll notice when you arrive in Cuba is what's not there -- no American businesses or brands, no chain restaurants, no mass-market tourist shops that have taken over the rest of the Caribbean. Although Cubans study English in school, most signage is in Spanish, and knowing even a few phrases goes a long way.

The Cuban people are happy to see you.

Other nationalities have been visiting Cuba for years. But when you tell a Cuban that you're American, you're greeted with wide smiles and a desire for conversation. People might be eager to tell you about cousins in New York and Miami, favorite American singers and their hopes that more Americans visit soon.

The rest of the world is not.

Americans are still a minority in Cuba, and many Canadians and Europeans are concerned that an influx would "ruin" the experience. It's a valid concern, although it ignores the larger point that the majority of Cubans are extremely poor. Now that their country has opened some avenues for private enterprise, the people deserve a chance to share their culture with the world, America included. Poverty isn't quaint; it's sad.

That being said, no one is eager to see McDonald's appear in Old Havana. Here's hoping that if and when American corporations come in, they practice smart and culturally sensitive development.

At every Cuban port, passengers line up to have their temperatures taken by thermometer-brandishing customs officials. Those whose foreheads were a few degrees higher than normal were told to stay on the ship.

You can buy rum and cigars.

The U.S. government allows anyone who travels to Cuba to legally bring back rum and cigars -- a bonanza to those who like to sip and smoke. Santiago de Cuba is the preferred brand of rum; you'll pay more the longer the liquor's been aged. As for cigars, the most famous names are Cohiba, Montecristo and Romeo y Juliet.

But not much else.

The Cuban communist system does not provide an abundance of material goods. You'll find some handicrafts here and there -- artwork in Havana is particularly worth seeking out -- but you won't find too many T-shirt and souvenir shops like you see on other Caribbean islands.

The U.S. laws that allow Americans to take cruises to Cuba changed in January 2015, via executive order. Since then, other changes have happened quickly. The U.S. government took Cuba off the list of countries with state-supported terrorism, allowing airlines like Jet Blue to offer flights directly to Havana. The United States has opened an embassy in Havana and Cuba has opened one in Washington, D.C.

You'll want to come back.

Related: Back-to-Back Cruises: What to Expect

In this story, we've listed many things that Americans won't find on the island. So what's there? Distinctive music, in every port. Colonial Spanish architecture that's among the oldest in the New World. Clear, sandy beaches. Historic forts. Strong coffee. Delicious cocktails. Kitschy murals featuring Fidel Castro and Che Guevera.

Above all, the Cuban culture boasts a sophistication that has survived 50 years of communism. Havana still has the same joie de vivre that attracted writers like Ernest Hemingway and made the musicians of the Buena Vista Social Club famous. Those old cars? The Cubans who are lucky enough to own them have kept them spotless, even as Americans have scrapped theirs for parts.

You'll find that a cruise to Cuba provides more than a walk back in time. It's a snapshot of a people who are ready to share their culture and benefit from interactions with the rest of the world. Once you've come, you're automatically part of their story -- and you'll want to keep reading to see what comes next.