You may also like
Dismiss
5 Cruise Lines You Don't Know About ... But Should
Which Cruise Should You Take to Cuba?
MSC Seaside vs. Carnival Vista
Countries That Require Visas for a Cruise
How to Apply for a Cruise Visa
6 Cruise Ports and Regions That Have Banned Sunscreen (and What to Use Instead)
Cruise Policies & Inside Information
What Is the Economic Impact of the Cruise Industry in the United States?
Step By Step: How to Submit Comments on Cruise to the CDC
Will Cruise Ships Be Sailing to Cuba Again Soon? 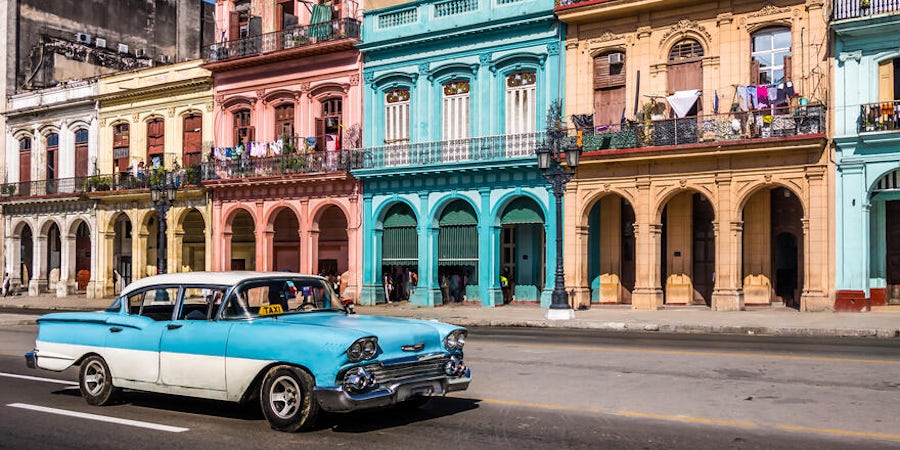 Q&A: Can Americans Travel to Cuba on a Cruise? (ID: 1839) (Photo: Diego Grandi/Shutterstock)

Q&A: Can Americans Travel to Cuba on a Cruise?

For the past 50 years, the answer has been no. But in 2015, Cuba emerged as one of the Caribbean's fastest-growing cruise destinations, thanks to President Barack Obama's determined attempts to reopen relations. Within months, a handful of cruise companies began to offer Cuba sailings for Americans, under a "people to people" license encouraging cultural and humanitarian exchanges, and by early 2017, most mainstream cruise lines jumped into the mix.

Here are some things Americans should know about sailing to this long off-limits country.

Is there still an embargo on travel to Cuba for U.S. citizens?

Yes, although it's much easier to go since relations with Cuba warmed in early 2015. Before, official travel to Cuba was restricted to certain types of trips. Individuals had to apply, and they could only go with licensed tour operators. Now, while the types of trips are still limited to 12 categories of travel, people no longer have to apply for individual visas. Travelers to Cuba can now also use U.S. credit and debit cards during their travels, although many American banks have yet to catch up with this. Bring enough cash to convert.

So what kind of travel to Cuba is allowed for U.S. citizens?

The major allowances for Cuba travel fall under work-related reasons. Journalists can enter Cuba, for example, as can performers and athletes. What's most exciting for a typical traveler, however, is that individuals can visit under a special visa, called a people to people license. These visas ensure travelers will participate in a cultural and educational experience while in Cuba, on a group trip such as a cruise or tour that makes sure excursions fit the parameters.

What still needs to happen for the embargo to be lifted?

Only Congress can completely lift the embargo, which was imposed in 1960 as a ban on trade during Dwight Eisenhower's administration. At the time, communist rebels led by Fidel Castro had recently come into power and were nationalizing American oil refineries and other private businesses, without compensation. President John F. Kennedy extended the embargo to travel in 1963, after the Cuban Missile Crisis.

So will Congress take action?

It's unclear. Although many Americans want to visit Cuba and the Obama administration worked steadily to improve relations with the country, there is a strong block of Cuban-American lawmakers, as well as Republican political leadership, who oppose normalization.

Things moved quickly in President Obama's term. The U.S. and Cuba opened embassies in Havana and Washington, D.C., respectively, and Obama made a historic visit to Cuba in March 2016. Several airlines now offer flights to Havana and it is no longer illegal to bring home Cuban cigars and rum from the island (or anywhere else, for that matter).

Has President Trump changed anything in regard to cruise travel to Cuba?

President Trump has taken a different view of Cuba from Obama. In June 2017, he signed an executive order putting limits on individuals who travel to the island without being affiliated with people to people programs. (These limits have not yet been realized.) While cruise lines follow people to people regulations and will continue to offer sailings to Cuba, it remains to be seen if passengers will continue to be allowed to self-certify and go out on their own; it seems unlikely.

Can cruise ships go to Cuba?

Yes, cruise ships owned by non-American companies have been traveling to Cuba for years, although they are all considered small (fewer than 1,000 passengers). Now, mainstream lines like Carnival, Royal Caribbean and Holland America make regular calls to Havana.

In 2016, Fathom became the first American-owned cruise line to sail between Miami and Cuba. Although the line shut down in May 2017, it opened the door to a host of other American-owned mainstream cruise lines, including Royal Caribbean, Norwegian, Oceania, Regent Seven Seas, Azamara Club Cruises, Pearl Seas and Carnival. The Canadian company G Adventures offers catamaran tours in Cuba; Americans are welcome, as long as they can ensure they are meeting U.S. requirements.

Other cruise lines that have permission to sail to Cuba include the French-owned Ponant and small-ship lines that have Cuba itineraries include International Expeditions, Insight Cuba, Victory Cruise Lines, Pearl Seas and Tauck.

Can Americans cruise to Cuba?

While the Obama administration made it easier for Americans to travel to Cuba by reducing licensing paperwork, your trip still has to fall under certain guidelines and your schedule can't include free time. In other words, you can't just be a tourist, which is what mainstream cruise passengers are considered.

Related: 8 Reasons a Cruise is the Best Way to Visit Cuba

There are some ways around this. By offering people to people educational and cultural excursions, cruise lines are able to bring Americans to Cuba. At this point, the only real barrier for a cruise line to go to Cuba is approval from the island country itself.

Can mainstream cruise lines sail directly to Cuba from Miami? What about other ports?

Yes. Since 2016, cruise ships have been allowed to sail directly to Cuba from Miami, with the government granting permission on a case-by-case basis. In 2017, cruise lines began receiving the go-ahead from Cuba to sail from other U.S. ports as well, including Tampa. Havana is now included on Eastern, Western and Southern Caribbean cruise itineraries, leaving not only from Miami but other ports such as New Orleans.

What can you see in Cuba?

Cuba has a distinct culture, with food, music and architecture that are celebrated around the world. It also has pristine beaches, wonderful diving and snorkeling spots, beautiful natural landscapes, a wonderful colonial architectural legacy and an extraordinary history. For more details on what a cruise to Cuba is like, check out our Pictures From a Cuba Cruise photo album and our article on Cuba Cruising Tips.

Can you buy Cuban cigars and rum legally now?

According to the U.S. Treasury, which has published a regularly updated

on the Obama administration's trade guidelines, there is no longer a specific monetary restriction on the alcohol and tobacco you can bring back from Cuba. Cigars and rum from Cuba are subject to the same customs requirements as those bought in other countries. As of October 2016, you can also buy Cuban rum, cigars and other goods for personal use overseas (hello, duty-free shops). It's still prohibited to buy Cuban tobacco and alcohol online or to bring items into the United States for commercial purposes. It remains to be seen whether Trump will amend these guidelines.