You may also like
Dismiss
6 Tips for Keeping Your Cabin Steward Friendly
Uniworld and Scenic's Cruises with a Butler
Tipping on a Non-Tipping Cruise Ship
How Not to Be Rude on a Cruise: 10 Ways to Make the Crew Love You
Secrets Luxury Cruise Lines Don't Tell You
What Is a Cabin Steward on a Cruise Ship?
How Much Should I Tip My Room Steward on a Cruise?
10 Things Single Parents Should Know When Cruising With Their Kids
7 Easy Things You Can Do to Help the Environment When You Cruise
7 Things to Know About the Cheapest Luxury Cruise Cabins 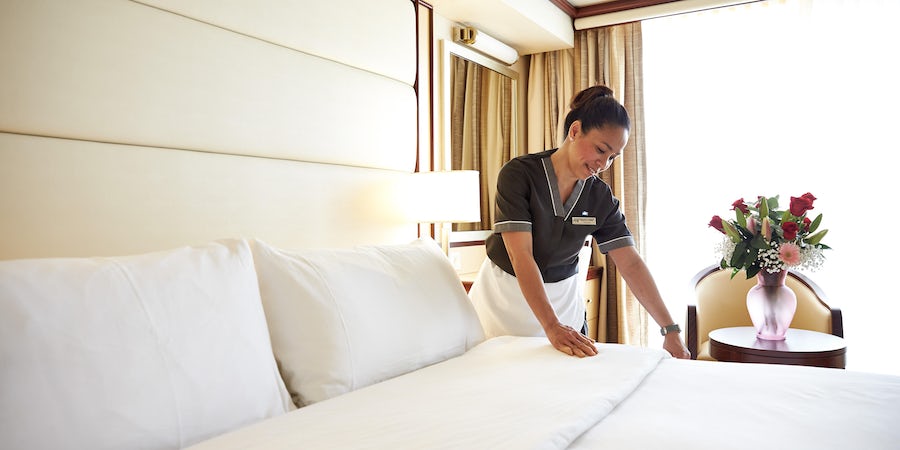 Cabin Stewards on a Cruise: What to Expect

What does a cabin steward do?

Your room steward serves as your cabin attendant for the length of your cruise. He or she will visit your room at least once a day (often twice on mainstream and luxury ships) to make your bed, take out the trash, replenish your towels, take away used glasses or room service trays and do other basic cleaning chores. On many ships, they are also responsible for creating those cute towel animals you see on your bed at night.

How do I know who my room steward is?

You will usually find a small card in your cabin that tells you the name of your room steward. It's also customary for your cabin steward to introduce himself or herself to you at the beginning of your trip. It's considered polite to say hello to your cabin attendant when you pass him or her in the hallway.

Will my cabin steward speak English?

Almost all cruise lines require their employees, especially those who deal with passengers, to speak English. That being said, English will probably not be your room steward's first language, and you might have to be patient when communicating.

Does the room steward have a key to my room?

Your room attendant does have access to your cabin while you are out; if you do not want your room to be made up, there's usually a "do not disturb" sign that you can hang on the doorknob.

If you are in your room, a cabin steward should always knock before entering.

Do I need to tip my cabin steward?

Most cruise lines put an automatic gratuity on your bill to cover the services of your room staff (and other crewmembers, such as dining room waiters). The amount is usually between $10 and $15 per passenger, per day, depending on the category of room, with higher daily gratuities for suites.

You are also free to leave an extra tip for your room steward at your discretion. Some people also give their cabin attendant a tip in advance to ensure better service (or if they know they're going to be especially demanding), but it's not required.

Will the room steward touch or take my stuff?

Most room stewards tidy up your personal belongings that are on visible surfaces, such as the floor or furniture. If you don't want someone touching underwear that you've strewn around, put it away in the dresser or closet.

Cruise lines have strict policies to guard against theft; at minimum, a cabin steward will be fired if found guilty. To ensure peace of mind, stow your valuables in the safe that is in almost every cabin.

How can I make special requests?

Your cabin steward will probably ask you on the first day if you have any particular preferences for things such as fresh ice, more towels or a bathrobe (if your room doesn't already have one). That's also the time to tell him or her if you require any special sleeping configurations (for example, two twin beds instead of one queen).

If you're in a higher class of cabin, you can ask your steward to deliver your included amenities, such as daily canapes, at a certain time. After that, if you have specific requests or questions, you can call your attendant on the number listed in your room or stop him or her if you meet in the hallway.

Most room stewards service a series of cabins along the same hallway, so who you get depends on where you are on the ship. That being said, if you don't like your cabin steward, you can go to the front desk and talk to the hotel manager, who can reassign your cabin to another attendant.

Can I bring my cabin steward a gift?

Some people like to bring their room steward a gift to show their appreciation. While this is a nice gesture, keep in mind that crew cabins are small and there's not a lot of room for trinkets. Your room attendant would more likely appreciate cash.

What's the difference between a cabin steward, a concierge and a butler?

Think of it as escalating levels of service. A room steward takes care of basic cleaning chores in your cabin. A concierge can set up shore excursions and special events and make restaurant and show reservations onboard, often doing so for an entire class of cabins. A butler can provide all these services and more, such as unpacking and packing your suitcases, setting up a private party in your cabin and even drawing a bath, if you so desire. Because of increased duties, a butler will take care of fewer rooms than a cabin steward.

Related: Uniworld and Scenic's Cruises with a Butler

How can I learn more about cruise ship cabin stewards?