You may also like
Dismiss
Best Cruise Ship Activities for a Class Reunion Cruise
Disney Cruise vs. Carnival Cruise
Cruise Costs: Is Celebrity Cruises Good Value for Money?
Cruise Costs: Is Carnival Good Value for Money?
8 Things to Love About Explorer Dream
How to Make Friends on a Cruise
9 Free Things to Do on Norwegian Encore
Pictures of Norwegian Encore
MSC Cruises FAQ 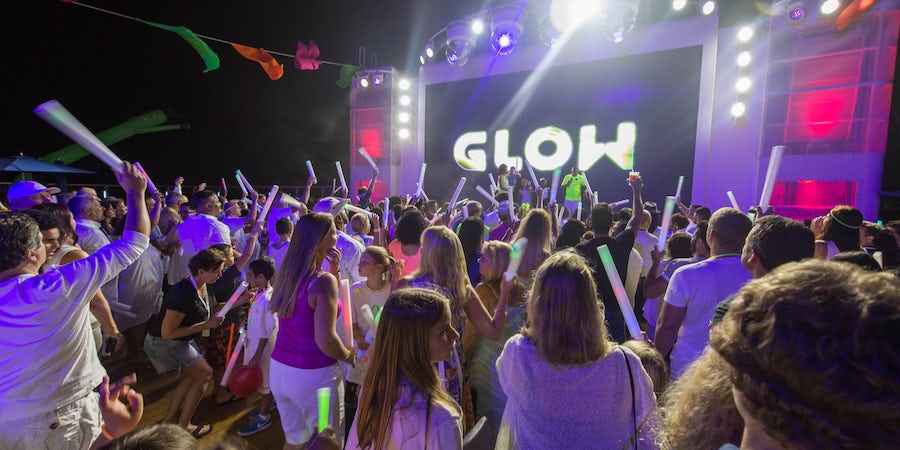 Nighttime Cruise Activities: What to Expect

What kind of entertainment and activities can I expect to find at night on my cruise?

Plus, there's the casino and plenty of bars including wine bars, piano bars, martini bars, gastropubs and more. River lines usually feature a singer/pianist onboard as well as local performances and enrichment programs based on ports visited.

Some cruise lines, including river cruise lines, offer special evening excursions in port if they stay late or overnight. This gives passengers more time to experience the destination and local culture. For example, Azamara offers more than a dozen of these in a variety of ports, at no additional charge.

How should I dress in the evening? And do all cruise ships have formal nights?

Related: Cruise Clothing: What to Wear Onboard

Evening attire varies from ship to ship, and even from one dining venue to another, but as a rule, most cruisers dress in slightly nicer clothes for dinner than they do during the day. Onboard luxury ships, the tendency is for most passengers to dress in after-five fashion in the evenings throughout the ship.

On mainstream lines, each night's suggested attire is listed in the daily cruise planner, but even that is primarily targeted to those dining in the main dining room and the specialty restaurants. Those who choose to dine informally in buffet areas often dress informally, regardless of the designation for the evening.

Not all cruises have designated formal nights. Short cruises might not schedule one; expedition ships, small ships and river cruises rarely have a designated formal night, but the captain may host an evening of pre-dinner cocktails and join the passengers for dinner. Suggested attire is usually a bit dressier on those nights.

Any specific dress codes (like no shorts in the main dining room in the evenings) are usually addressed in the cruise line's frequently asked questions.

How can I find out about everything going on onboard my cruise?

Your daily cruise planner, which is delivered to your room each night, is your go-to for daily (and nightly) happenings, including when and where they all take place.

Do I have to pay for any evening entertainment on my cruise?

Typically, no. Seating for comedy shows, plays and other live performances are usually on a first-come, first-served basis but are free of charge. Some dinner theater requires a cover charge and the casino is pay-to-play.

Depending on your cruise line and itinerary, some excursions may depart in the evening (think an orchestral performance at a Vienna concert hall or sleeping on a glacier in Antarctica) and these will cost you extra.

Is there any nightly adults-only entertainment on a cruise ship?

Dance clubs are normally 18 and older to enter, and they're usually one of the last places to close for the night (along with the casino, which also is 18 to play). Some cruise lines, such as Carnival, offer late-night, adults-only comedy acts that showcase more mature (read: raunchier) jokes.

Other lines offer adults-only gameshows. For example, Royal Caribbean has Quest, a risque scavenger hunt during which the audience is divided into teams and tasked with finding and doing crazy things, without leaving the room. Warning: there will be dancing and undergarments on the loose.

What is there for kids to do on the ship at night?

Kids and teen clubs are well equipped to entertain younger cruisers, from the 3 and up crowd to the angstiest teens. For kids, nighttime activities take place most evenings of the cruise in the kids club and might include game tournaments, movies, arts and crafts and scavenger hunts. Late-night parties after 10 p.m. often cost extra.

Teens can participate in dance parties, play video games and even take DJ lessons on Carnival.

Family activities at night include family-appropriate comedy shows and outdoor film screenings, such as Princess Cruises' Movies Under the Stars, complete with popcorn and blankets. (Select evening activities cost extra.)

Some ships have nurseries and can offer evening group babysitting for the under-3 set, for a fee, so parents can enjoy kid-free time in the evening. Nurseries are set up with cribs and cots, as well as play areas.

Do I need to eat early to ensure I get to see evening shows?

Most likely, no. Most theater productions are held twice per night, with start times built around early and late dinner seatings. As long as you don't linger over dessert, you will be able to get to a show before the curtain goes up. Smaller ships may only offer a single performance, but greater flexibility of dinner scheduling allows you to plan accordingly.

How late are cruise ship bars and lounges open?

This depends on the passenger mix of any given sailing. Typically, cruise bars will close around 1 a.m. on ships carrying mostly North American passengers. Expect lounges and clubs to be open even later on Europe-based cruise lines for passengers used to dancing or chattering into daylight hours. River ship bars -- there's usually just one per ship -- tend to close by midnight.

How can I learn more about nighttime activities?