You may also like
Dismiss
Delta Queen Hotel vs. Queen Mary Cruise Ship Hotel
7 Reasons American Queen Is the Cruise Ship for You
Christmas Markets Cruises Tips
Cunard Line History
Can I Play Bridge on a Cruise?
Best Cruise Travel Agents
8 Reasons to Cruise on a Refurbished Ship
The 10 Most Popular Episodes of “Cruising with Jane McDonald”
How Reassuring are New Cruise Cancellation Policies Really?
How To Cope With Cruising's Pause? Plan Far, Far Ahead 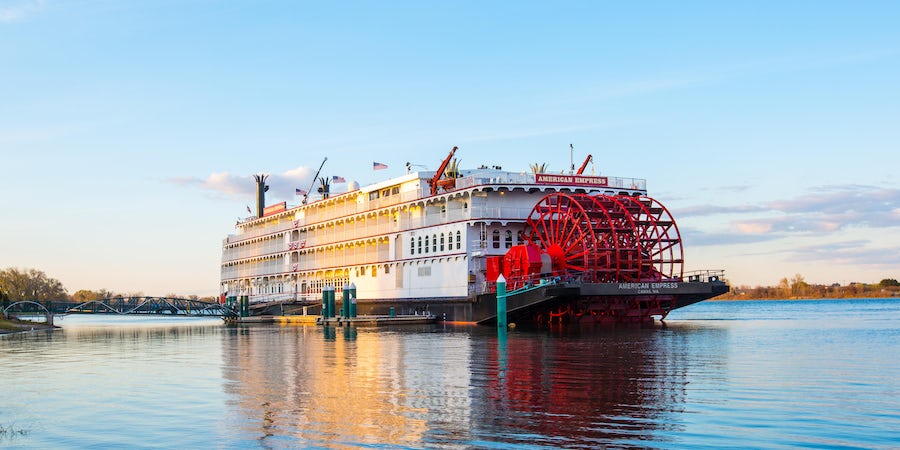 Conjuring up evocative images of stately paddlewheelers, the Mississippi River is America's most iconic waterway. It twists 2,340 miles from northern Minnesota to New Orleans through the heartland, growing wider the farther south you go.

Itineraries are culturally intriguing and crammed with history. In a single day, you might see someone being baptised in the river, learn about the worst floods in U.S. history and tour a Civil War battlefield. Back onboard, you might attend a lecture from a knowledgeable "riverlorian", and relax on your balcony or the sun deck and watching the world go by, before watching an after-dinner song-and-dance show in the theater.

The world's largest river cruise operator Viking River Cruises launched its first ship on the Mississippi -- and first-ever vessel in the U.S. -- in 2022. Breaking away from the tradition of paddlewheelers, the Viking Mississippi features the line's trademark Scandinavian design elements. It sails on four weeklong itineraries and one 14-night voyage.

Because it is so long, the Mississippi is usually divided into three parts. Each segment typically takes a week, or you can combine them for a three-week cruise. The scenery along the river is generally prettier and the wildlife more prevalent the farther north you go. All segments can be done in either direction.

Keep in mind that sailing against the current slows the boat and generally means fewer ports or less time in port, but you'll have more time to relax onboard.

Lower Mississippi (New Orleans to Memphis): A weeklong sailing, which can run in either direction, this stretch of the river can include port stops like Oak Alley and Nottoway plantations, Baton Rouge and St. Francisville in Louisiana; Natchez, Vicksburg and Greenville in Mississippi; and Helena, Arkansas. The occasional New Orleans (round trip) cruise, which can run from five to seven days, typically visits the same ports, minus Memphis.

Upper Mississippi (St. Louis to St. Paul): Considered the most scenic stretch of Mississippi, these weeklong sailings stop at ports that include Hannibal, Missouri; Davenport, Clinton and Dubuque, Iowa; La Crosse, Wisconsin; and Red Wing, Minnesota. You might also find the occasional St. Louis round trip or St. Paul round trip sailing, each of which features an extra stop in either Illinois, Minnesota or Wisconsin.

Vicksburg, Mississippi: The site of a famous Civil War battlefield, Vicksburg also offers a glimpse into its Southern heritage with antebellum plantations, old churches and restored train depots. A popular attraction is National Military Park, where visitors can learn about the siege and defence of the city. The park includes more than 1,370 monuments and markers, a restored Union gunboat and a national cemetery. Boat-lovers might like the Old Depot Museum, which features the world's largest collection of ship models, as well as a collection of riverboat models and U.S. Navy ships with Mississippi names.

Baton Rouge, Louisiana: Louisiana's state capital is an intriguing mixture of African-American and Caribbean cultures and a hot spot for Creole and Cajun cuisine. Visit Louisiana's Old State Capitol or new state capitol building -- or head to the LSU Rural Life Museum for a showcase of what life was like on a typical 19th century plantation. Visit the kitchen, slave cabins and grist mill before touring a replica of the town.

Memphis, Tennessee: The king of rock 'n' roll called Memphis home, and Elvis' home is the city's biggest tourist attraction. But Memphis is more than just Graceland. The National Civil Rights Museum is a must-visit, as is Shelby Farms Park, one of the country's largest urban parks.

St. Louis, Missouri: Known as the Gateway to the West, the iconic Gateway Arch offers great views of St. Louis, as well as the mighty Mississippi. Other attractions include the Anheuser-Busch Brewery and Missouri Botanical Garden.

St. Paul, Minnesota: One of the Twin Cities, St. Paul offers several historic homes open to the public, as well as museums, art galleries and Indian Mounds Regional Park, with its scenic overlook. A unique attraction is the Wabasha Street Caves, a cave-turned-event hall that was once the haunt of Prohibition-era gangsters and offers guided tours.

I’ve Booked a Mississippi River Cruise. Now how Do I Best Prepare For it?

Prepare for small towns: Itineraries might incorporate major cities like New Orleans and Memphis as cornerstones, but your experience will also focus on small towns along the way.

There are few full sailing days: Because of the short distances between ports, full days of river cruising are rare. However, when you spend time sailing, there is usually commentary from a "riverlorian" over the public address system explaining some of the sights you pass.

Mother Nature rules: The same way a hurricane might force an oceangoing cruise ship to change course, bad weather on the rivers can alter itineraries. For instance, one year's drought along the Mississippi kept waters so low that riverboats couldn't sail upriver, and operators had to push some of their Upper Mississippi sailings onto the Ohio. Another year, too much rain flooded the river, making it impossible for riverboats to get under bridges and forcing the closing of several locks. The result was the same as during the drought. Boats scheduled to sail the Upper Mississippi were diverted onto the Ohio.