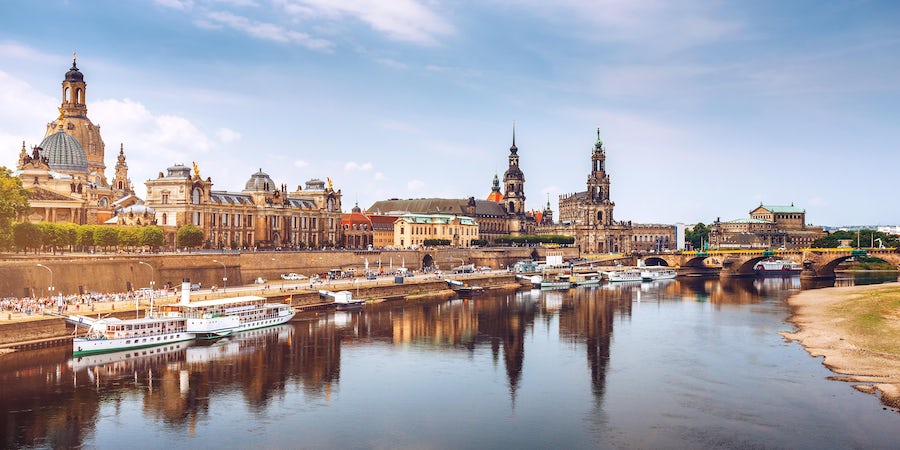 As is the case with many of Europe's great rivers, the Elbe -- Germany's second most well-known river after the Rhine River -- was named by the Romans.

They called it the Albis, which became the Elbe to the Germans and the Labe to the Czechs. Its source is located high in the Czech Republic's Krkonose Mountains, and it flows 724 miles northwest through Germany to meet the North Sea at Cuxhaven, north of Hamburg.

From Dresden to Hamburg, the river passes through the verdant vineyards of Saxony and the beautiful Sandstone Mountains, known locally as the Saxon Alps. A cruise along the Elbe provides a cultural tour of Germany and Eastern Europe, taking in some of the region's loveliest scenery and most fascinating cities.

Most river voyages run between Prague, the fairy tale capital of the Czech Republic, and Hamburg. Prague is linked to the Elbe by the Moldova River (also known as the Vltava), while beyond Hamburg, at the seaward end of the Elbe's flow, you'll find the famous Kiel Canal -- which links the North Sea and Baltic Sea -- and the Oder River (famed for its rich bird life), which allows access via the Havel River to Berlin.

Other notable towns and cities along the river's banks include Dresden, Meissen (known for its delicate porcelain), Worlitz (home to magnificent castles and gardens), Wittenberg (where Martin Luther began his Reformation) and Magdeburg, with its atmospheric Gothic Cathedral.

With so much to explore, the Elbe is burgeoning in popularity as a river cruise destination. But it is likely to remain a relatively uncommercialized river because it is shallow and narrow in parts, with low bridges. Therefore, the types of riverboats able to navigate it are limited -- thankfully, you might say. The Elbe can suffer from low water levels, especially in June and July. Riverboat operators adjust if a stretch of river is running either too high (causing a problem with low bridges) or too low (where the concern is that the boat might run aground). Sometimes passengers are bussed to destinations along the river or transferred (where possible) to boats in a different riverside location.

It's important to understand that fluctuating water levels are part and parcel of river cruising and beyond the control of operators. Be prepared -- quite literally -- to "go with the flow."

With year-round Elbe cruises available from 2016, you'll be able to enjoy the river in its many moods and seasons. If you need warmth, it's best visit between May and September when temperatures are in the 70s. But rain is also more likely and heavy tourist traffic is a certainty, so pre-and post-cruise hotel stays will cost peak-season prices.

Temperatures fall substantially from October to December, but so do tourist numbers (except for the busy Christmas market season). Average temperatures in October can be in the mid-50s and fall to the 30s and below as the year draws to a close. January and February are often freezing. While temps rise again in March and April, you should still take layers of warm clothing.

Key events include the Duckstein Festival (an annual beerfest that takes place during July and August in Hamburg and Berlin); Hamburg's Reeperbahn Festival in September; and Christmastime, of course, when Hamburg, Prague and other cities along the river host magical markets. Most cruises start in Hamburg or Berlin and end in or near Prague (or vice versa). Cruises starting from Berlin sometimes originate at Potsdam to bypass part of the Havel-Oder's complex lock system. If this is the case, your operator will arrange for you to travel from Berlin to Potsdam by coach.

Seven-day cruises:. A classic seven-day "Elegant Elbe" sailing visits the German destinations of Magdeburg, Dessau, Wittenberg, Torgau, Meissen, Dresden and Bad Schandau, enters the Czech Republic to call at Litomerice and ends at Melnik or Usti nad Labem (for Prague) or at Prague itself.

Czech Republic cruises: These itineraries are best if you want to visit just the Czech Republic and explore Prague in depth. These seven-day voyages concentrate on the Czech capital, operating from Prague to Melnik, Litomerice and Usti (home to Strekov Castle and the Vetruse Chateau), then calling at Nymburk and 13th century Nelahozeves, before returning to Prague for a three-night stay with a side trip to Trebenice.

Berlin-focused sailings: Alternatively, some Elbe cruises run round-trip from Berlin, with two days in the city before visiting Potsdam, Magdeburg, Dessau, Wittenberg, Meissen and Dresden. The voyage spends two days in Bad Schandau in Germany -- a gateway to Prague -- before you return to Dresden to disembark and transfer by coach back to Berlin. Berlin: The classic Berlin tourist trail shows you the Reichstag (Berlin's 19th century parliament building, now topped with an eye-catching glass dome), the iconic Brandenburg Gate, and one of the world's most famous boulevards, Unter den Linden, which leads to it and to lovely Tiergarten park. Look for "Checkpoint Charlie" and remnants of the Berlin Wall, which divided East Berlin and West Berlin from 1961 until its spectacular destruction in 1989.

But since its restoration as capital city of a unified Germany, Berlin has looked confidently toward the future, as well as acknowledging its past. Its new confidence is reflected in a host of glossy, architecturally impressive new buildings like the Potsdamer Platz retail and entertainment complex.

Potsdam: This city -- which lies on the Havel River just southwest of Berlin and is the boarding point for most Elbe cruises -- is home to magnificent palaces, vast parks and manicured gardens.

Once the seat of Prussian royalty, Potsdam epitomizes haute European stylishness and boasts many fine houses. The most notable is Sanssouci, which was the summer palace of Frederick the Great. The palace was built in 1745 and features glorious parklands. Also, make time to explore Potsdam's historic Dutch Quarter, its ancient Weavers' Quarter and the Alexandrowka (formerly a Russian colony and now a museum). Indeed, it's worth considering having a pre- or post-cruise stay in Potsdam, as well as Berlin.

Magdeburg: Linked by the Elbe River to the North Sea, Magdeburg was an important trading city in medieval times, and its past glories are still celebrated, notably its fine cathedral, which was the first Gothic church in Germany when it was built between 1209 and 1520.

Like so many German treasures destroyed by the rise of Nazism, the cathedral was badly damaged in World War II, but it was lovingly reconstructed in the 1950s and continues to be Magdeburg's most imposing building. The Renaissance-style Town Hall in Magdeburg's Market Square is another impressive reconstruction, and you can get a feel for the city's history in the Museum of Modern Art, which is housed in the 11th century Monastery of Our Lady.

When you've had your fill of history, head downtown and explore Magdeburg's bustling waterfront, where the Elbe meets the Mittelland Canal and the Elbe-Havel Canal.

Hamburg: Hamburg is Germany's second largest city (after Berlin), and its cultural diversity, modern outlook and vibrant nightlife make it one of Europe's most popular cities for tourists.

You can have a lively time lunching and exploring the city's Harbour Promenade and revitalized Warehouse District. Or check out the clubs and bars of its world-famous (and outrageous) Reeperbahn red light district.

Those with more cultured tastes will enjoy the Art Gallery and Gallery of Contemporary Arts, while lovers (or just lovers of classical music) should be in Hamburg in August for "Romantic Nights" in the city's lovely Tierpark, which has a well-maintained zoo and hosts woodland classical concerts throughout the month.

Don't miss a chance to view Hamburg from the water on a canal boat tour; these depart from the harborfront and provide spectacular evidence to back Hamburg's proud boast that it has more than 2,500 bridges -- more than Venice and Amsterdam combined. Wittenberg: Located between Leipzig and Berlin, Wittenberg is famous as home to one of the world's oldest universities, founded in 1502. Even more importantly, it was home to Martin Luther, who launched the Protestant Reformation from there, and the city's connection with the reformer led to several of Wittenberg's historic sites being given UNESCO World Heritage status in 1996.

Part of the Augustinian monastery in which Luther lived has been preserved as a museum of the Reformation, but if time's at a premium, put the Castle Church top of your must-see list. The church holds Luther's tomb, and its door was where he nailed his 95 theses in 1517. The original wooden doors of the church were destroyed in 1760, but they were replaced with bronze doors on which Luther's text is written in Latin.

Dresden: The capital of Saxony, Dresden straddles both banks of the Elbe. Its two sides are linked by the Blue Wonder bridge, a marvel of 19th century engineering and one of the city's most famous landmarks. The city is crammed with the reconstructions of elegant Baroque buildings and grand villas once owned by the cream of European aristocracy.

Dresden was largely destroyed during bombings during World War II and then spent 40 years under Communist rule. Since the reunification of Germany, the city has enjoyed a true Renaissance that has seen the detailed reconstruction of former Baroque splendours including the Zwinger Palace, the Opera House and the Frauenkirche, Dresden's cathedral, which was rebuilt in 2005.

This regeneration has been so successful that a call at Dresden is now a highlight of an Elbe cruise, and the Dresden Elbe Valley's beautiful scenery -- which includes Pillnitz Castle, extensive parkland and vineyards.

Zernoseky and Leitmeritz: These charming Czech towns epitomize the pleasures of cruising along the Elbe. Zernoseky, a quiet place surrounded by terraced vineyards, offers wine tastings in a 13th century chateau, while Leitmeritz -- on the Elbe's right bank -- is famous for its beer and worth exploring for its historic cathedral, bishops' palace and 15th century bell tower.

Melnik: This city of viniculture is set in one of Bohemia's most fertile agricultural areas, where the Elbe and the Vltava rivers meet. Worth seeing: Melnik's Renaissance castle and its extensive wine cellars, along with Melnik Square, which is home to Gothic and Baroque houses as well as a Renaissance City Hall.

Prague: This fairytale city has fast become a "bucket list" destination for travelers all over the world, and most flock to see its lofty, ninth century castle (the Czech president's official residence). Devote time to a visit to Prague Castle and its Imperial Stables and riding school, three lavish courtyards and toy museum. You also can check out grand palaces, monasteries and churches, including St. Vitus Cathedral.

Prague's Lesser Town lies on the slopes below the castle, and top attractions there include Wenceslas Square (with its historic animated clock) and the Charles Bridge. Bring layers: The weather is cold in the shoulder months and freezing in winter. Even in summer, breezes on the river can be chilly, so take a few layers to stay snug.

Invest in good shoes: Don't forget stout walking shoes because there is much to explore on foot.

Be flexible: Be prepared for fluctuating water levels. The Elbe flows through a fascinating part of the world, so it's worth bracing yourself for the possibility of some inconvenience.