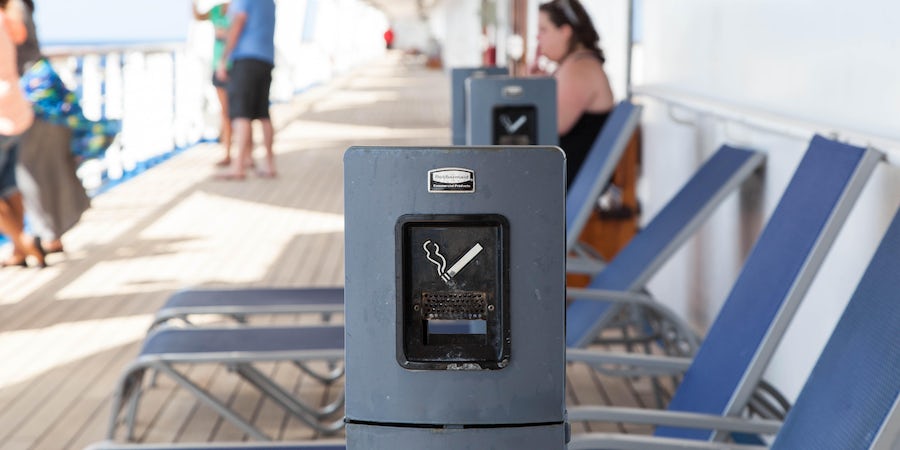 Smoking on Cruise Ships: What to Expect

Can you smoke on a cruise ship?

You may smoke on a cruise ship, but only in designated smoking areas. On most ships operated by U.S. cruise lines, all indoor public spaces are off-limits with the exceptions being the casino (or part of the casino), a cigar lounge (if the ship has one) and one or two other lounges. Carnival Cruise Line, for instance, lets smokers light up in the casino, the casino bar and usually one or two clubs.

Outside, smokers are typically restricted to small areas on one or more decks. The designated area may be different from one ship to another within the same cruise line. Smoking information can usually be found in the FAQ section of the cruise line's website, but when in doubt, ask upon boarding.

On European lines, there's usually a bit more room for smokers to spread out, but even those lines are cutting back. Some cruise lines, including Royal Caribbean, adjust designated smoking areas when their ships are sailing from Australian ports.

Can I smoke in my room?

Not a single major cruise line permits you to smoke in your cabin, as it is considered a fire hazard.

Can you smoke on a cruise ship balcony?

What happens if I am caught smoking somewhere I'm not supposed to be smoking?

Is there someplace on a cruise ship I can smoke a cigar?

Cigar smoking is even more limited than cigarette smoking. In most cases, cigars may only be smoked in a cigar bar (if there is one on the ship) and one small area of an outside deck. No cruise lines permit cigar smoking on a cabin balcony.

I smoke e-cigarettes; are they allowed on cruises?

Most cruise lines treat e-cigarettes the same as regular cigarettes and ban vaping in almost all public areas, in private cabins and on balconies. A few notable exceptions do exist. You may smoke an e-cig in your room (but not on your balcony) on any Holland America Line or Seabourn ship, and in all non-dining venues on Oceania.

Can I smoke pot on a cruise ship?

You might think that, with the spread of legalized marijuana across the U.S., you'd be able to smoke pot onboard a ship sailing from one of the states that allows for medical or recreational use. You'd be wrong.

Cruise ships sailing from U.S. ports are governed by federal laws, not state law. At this time, all uses of cannabis are illegal under federal law, with no distinction between medical and recreational use.

Therefore, all cruise lines prohibit possession and use of marijuana (in all forms) onboard. Because ships sail in and out of the jurisdictions of multiple countries, it would be impossible to regulate exactly when passengers could legally smoke pot and when they could not.

Even if your cruise takes place wholly within a region where it is legal (Alaska and Canada, for example), the combination of federal law in the U.S. and cruise line policy means that you cannot bring cannabis in any form onboard to consume or transport. Fines for violations may be imposed by the cruise line (Carnival's fine is $500), and you could be disembarked or even arrested by local authorities if the violation takes place within a jurisdiction where smoking marijuana is illegal.

How do I find out more about smoking on a cruise ship?