You may also like
Dismiss
The Truth About Solo Cruise Cabins
Harmony of the Seas vs. Anthem of the Seas
7 Times an Inside Cabin is the Best Choice on a Cruise
8 Things to Know About the Cheapest Cruise Ship Cabins
Which Royal Caribbean Suite Should I Book?
MSC Meraviglia vs. Harmony of the Seas
MSC Seaside vs. Carnival Vista
Solstice Class vs. Edge Class on Celebrity Cruises
7 Things to Know About the Cheapest Luxury Cruise Cabins
Holland America FAQ 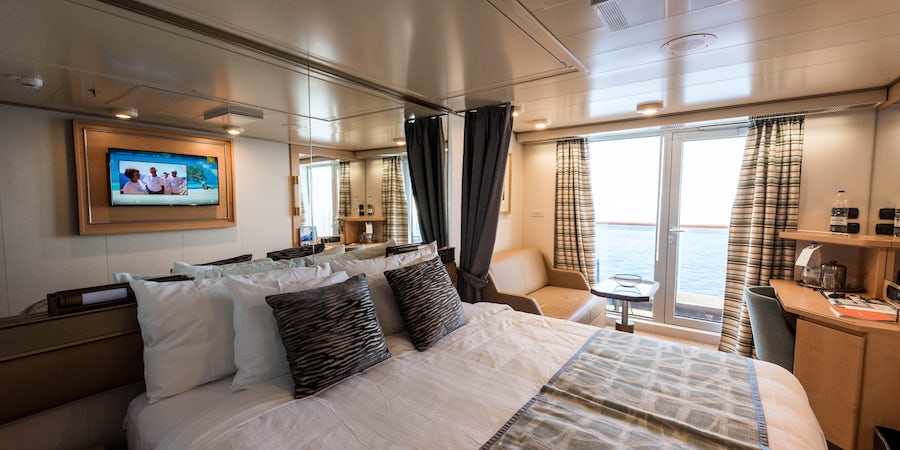 Choosing a Cruise Ship Room: What to Expect

What kinds of rooms are there on a cruise ship?

Inside cabins are the smallest-sized rooms, with no window to the outside.

Outside cabins, also known as oceanviews, are those that provide a view to the outside world via a window or porthole (a round window). A standard outside cabin is usually slightly larger than an inside stateroom.

Balcony or verandah cabins each feature a semi-private verandah that allows you to step outside without going up to a public deck.

Suites are large cabins, often with separate living and sleeping areas, sometimes with two-levels, that offer a wide variety of extra amenities and perks.

Additionally, some cruise lines offer a cabin category, called a minisuite, that's halfway between a balcony and a suite.

Do I have a choice of cabin sizes?

While inside cabins are the smallest rooms on most cruise ships, in some cases they may be the same size as or only slightly smaller than basic (sometimes called standard) outside and balcony cabins. On most major cruise lines (such as Carnival, Royal Caribbean, Norwegian, Celebrity, Princess and Holland America), the size of a standard inside cabin will most likely fall between 150 and 185 square feet, a standard outside 160 to 200 square feet and a standard balcony 175 to 220 square feet.

These are average ranges, and cabins can -- and do -- run smaller and larger on different ships. Non-standard cabins -- deluxe-sized, handicapped-accessible or designated family cabins -- will also run larger than their more basic counterparts.

Suite sizes are not standard across the industry by any means.

For many cruisers, the decision on what size cabin to get is directly related to price. The larger the cabin, the more you'll pay.

To read more about cabin sizes, check out How to Choose a Cruise Ship Cabin: What You Need to Know.

Is it worth the extra money for a cabin with a window or a balcony?

Only you can decide if the extra cost is "worth it" to you. For many cruisers who choose not to spend a lot of time in their cabins, a smaller, less expensive cabin is all they need. Others prefer more space or to hang out on their balconies to soak up the sun in private. However, if you need natural light or are prone to seasickness or claustrophobia, it's worth upgrading from a windowless inside to an outside or balcony cabin.

I'm traveling with my kids. Can we all stay in one cabin?

Not all cabins can accommodate more than two people, so you'll need to look for cabins with pulldown beds (called Pullmans), convertible sofa beds or a second room. Many ships have designated family cabins in a variety of categories that are larger and designed with families in mind, so they often have more sleeping areas and even 1.5 or two full baths.

Suites, even when not specifically geared to families, often can sleep four or more and may have family-friendly amenities, such as extra space, a second bathroom, separate sleeping and living areas, and priority boarding and debarkation (useful when your children don't have the patience to wait in long lines). Another option, rather than squeezing into one cabin or splurging on a suite, is to book two adjoining cabins that interconnect through an interior door.

I'm traveling by myself. What are my cabin choices?

Most cruise ships do not have solo cabins. Single cruisers must select a standard cabin (in almost any category) and pay what's called a single supplement. This is an additional fee, above the per-person fare. It's usually double the per-person fare, essentially forcing you to pay the price of two people since cabins are designed for double occupancy. Cruise lines do occasionally discount single supplements, sometimes slashing them by as much as 50 percent or even eliminating them entirely.

A handful of cruise ships do feature specially designated solo cabins, designed with single cruisers in mind. These rooms tend to run small and, for the most part, are inside cabins; however, the prices for solo cabins can be lower than what single cruisers normally pay for sailing alone in a standard cabin.

Royal Caribbean's Quantum-class ships have 28 cabins for singles, designated as studios, some with balconies. One Oasis-class ship (Harmony of the Seas) has 15 studios, some with ocean views. Six other Royal Caribbean ships have a handful of studios. Norwegian has studio cabins for solo cruises on six ships. Five of those include access to an exclusive Studio Lounge with snacks and coffee.

For more about taking a cruise by yourself, read Solo Cruise Tips.

What kind of questions should I be asking myself when deciding which cabin to choose?

The first question you must ask yourself when choosing your cruise ship cabin is "how much can I afford to spend?" Your answer to this will immediately define your choices; cabins get more expensive as they get larger or more amenity-laden.

Next, ask yourself what's important to you. Do you tend toward claustrophobia? Then you'll need to choose a larger cabin or at least a room with a window. If you do have a budget, would you rather spend the money on a larger cabin but have less left over for onboard expenses? Or, would you rather go for a slightly smaller cabin, but have more to spend onboard or on excursions?

Also, look at where you're sailing. For example, Alaska is very scenic; do you really want to be in an inside cabin? But it's a bit cold for standing on your balcony, so maybe a window is all you need.

I get seasick. Can I choose a cabin location that will lessen the chances of my getting sick?

There are no cruise ship cabins that will eliminate the chances of you getting seasick. However, if you are prone to motion sensitivity, you'll want to select a cabin that's on a lower deck and in the middle of the ship. The very last place you want to be is near the front of the ship.

You should also choose a room with a window or possibly a balcony if you want quick access to fresh air. Either way, looking at the horizon helps to ward off queasiness.

I'm a light sleeper. Are there certain cabins I should avoid?

If you have trouble sleeping when there's a lot of noise, you'll want to avoid cabins that are in the vicinity of high-traffic areas. That could include those near the elevators, across from crew entrances and under or over the casino, theater, lounge, sports decks and restaurants. That said, any cabin can be noisy if you have rowdy neighbors; bring a white noise machine or ear plugs to lessen the din.

I have special needs (use a wheelchair, am deaf or blind). Are there cabins that can accommodate me?

All mainstream cruise lines have a select number of accessible cabins designed for wheelchair users or travelers with mobility issues. Travelers who are blind or deaf can often request TTY/TDD equipment and portable room kits featuring visual and tactile alert systems for door knocking, telephone ringing and the like. Always mention your needs to your travel agent or cruise line when booking.

Also keep the location of your cabin in mind when selecting your room. You might want to be closer to the elevator to cut out long walks.

Related: What to Expect on a Cruise: Boarding a Cruise Ship

For more information on accessible cruising, check out A Beginner's Guide to Accessible Cruising and Best Ships for Cruisers With Disabilities.

How do I know where cabins are located on the ship?

To determine where cabins are located on a ship, check the deck plans for that ship. Deck plans can be found on each cruise line's website, as well as via a link from the Cruise Critic ship review page for the ship you want. Deck plans will show you where cabins of all categories are located on the ship. You can use them to find cabins in locations you like (near the elevator, steps from the pool deck) or, conversely, where you don't want to be (near the elevator, across from a crew entrance, below the casino).

How can I learn more about choosing a cruise ship cabin?