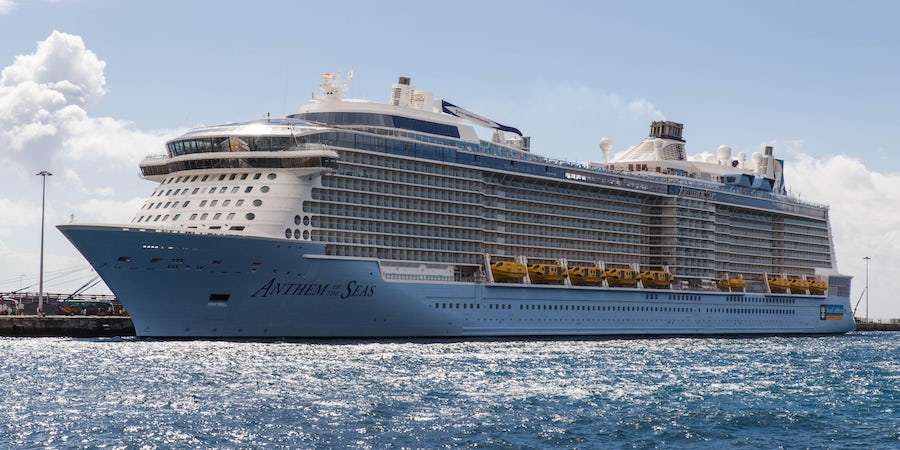 Ship Exterior on Anthem of the Seas

Anthem of the Seas, which launched April 20, is Royal Caribbean's first new ship dedicated to the Western market since Allure of the Seas made a splashy debut in 2010. Though Quantum of the Seas, the first of three Quantum-class ships, has spent its first six months in the West -- in Bayonne, New Jersey -- it's soon on its way to a permanent homeport in China.

With Anthem of the Seas, Royal Caribbean has the chance to address some of the issues that plagued Quantum when it first came out, namely technological delays and unhappiness with the line's new Dynamic Dining program. Excluding those glitches, Quantum of the Seas has been lauded for its entertainment options and overall atmosphere, a unique blend of contemporary elegance and whimsy. Anthem of the Seas will see these popular facets of Quantum of the Seas return but will also receive tweaks designed to iron out the kinks.

Not convinced you should take a chance on Anthem (especially if you felt burned by Quantum)? Here are 10 reason Anthem of the Seas might be the ship for you.

1. Royal Caribbean has had six months to work out the hiccups onboard Quantum of the Seas.

Virtually all of the technological glitches have been fixed, and the high-speed Internet and easy-to-use reservation kiosks are now working without issue. Ratings from Cruise Critic members are slowly going up for the ship, and there are more three- and four-star reviews than one- and two-star reviews. With Anthem of the Seas, Royal Caribbean was able to take what it learned from feedback from Quantum passengers and apply fixes to the new ship. It carefully addressed the areas that saw the most complaints, and the experience onboard Anthem has come out of the gate feeling more polished and ready to go. On Anthem, that means they added several hundred more seats among the ship's complimentary restaurants, and they've added more crewmembers to address service concerns.

2. You can have the same waiter and tablemates.

One of the biggest complaints from critics of Dynamic Dining was that they weren't able to get to know their waiters and, conversely, have their waiters get to know them and their likes and dislikes. Another complaint came from people who didn't want to think about having to book a reservation every night, but rather wanted the cruise line to take care of it all for them, a side effect of Dynamic Dining's "do what you want when you want" concept. Though not throwing out Dynamic Dining altogether, Royal Caribbean addressed the issues, making tweaks to the system on Anthem of the Seas by adding a "classic" version of the program. With Classic Dynamic Dining, passengers may dine at one of two set times (early or late) with the same tablemates and waiters each night, albeit at a group of four main restaurants that will rotate throughout each sailing. According to Royal Caribbean, roughly one-third of passengers on bookings so far have opted for Classic Dynamic Dining.

3. You'll find so many dining options.

Royal Caribbean has long featured a choice of specialty restaurants on many of its ships, but with the Quantum Class, it's the first cruise line to feature the most diversity among "free" choices. About half the restaurants on Quantum of the Seas are included in the cost of the cruise, and the variety is notable, with American comfort, Asian and contemporary sit-down dining options, as well as casual bites like a hot dog cart, pizza and even a low-calorie, gluten-free venue. Of course, there's no shortage of for-fee restaurants, which run the gamut from a traditional steakhouse (Chops Grille) to a molecular gastronomy experience (Wonderland). Royal Caribbean also joined forces with celebrity chefs Michael Schwartz and Jamie Oliver (aka the Naked Chef).

4. You can try skydiving at sea.

One of the most popular features on Quantum of the Seas is RipCord by iFly, a skydiving simulator. People love it. Even those who were hesitant to try it out say they're glad they gave it a go. Each passenger who tries RipCord by iFly gets a chance to spend a full minute experiencing the sensation of a skydiving freefall. Better yet, it's free. And adrenaline junkies who get hooked on the experience can book additional private skydiving time (for a yet-to-be-determined fee). And don't forget, the FlowRider surfing simulator is right next door.

5. You can play at the SeaPlex.

OK, so maybe we were a little skeptical when we first heard about its bumper cars, floating DJ booth, circus school and roller skating. But then we experienced it all on Quantum of the Seas and now again on Anthem of the Seas, and time flies by while you're playing; it's impossible not to feel like a kid again. Designed to entertain with a huge variety of activities, including Xbox gaming and full-court indoor basketball, the SeaPlex is the spot to be on sea days or when the weather is lousy.

6. You can stay in touch with loved ones at home and at sea.

Internet speeds onboard Quantum, Allure and Oasis of the Seas already rival speeds on land, and Anthem features the same communication system. That means passengers who purchase Internet packages (there are a variety available depending on your needs) can access email, share photos via social media or make video calls to shore. We actually streamed Netflix videos onboard Anthem, something virtually unheard of on cruise ships. Expect prices to be about half of what you find on other Royal Caribbean ships. For staying in touch with friends and family sailing with you, Royal Caribbean offers the Royal IQ app on Anthem of the Seas. The app allows passengers to keep in touch with one another via their cell phones with texting and calling. This is especially helpful for families or groups traveling together, when coordinating schedules can be tricky.

It's difficult to adequately describe this spectacular entertainment venue -- giant digital screens on robotic arms displaying colorful visual effects combined with pop music, live singers and acrobatic dancers. But, believe us, the result is an immensely enjoyable high-tech show. The main Two70 show on Anthem is "Spectra's Cabaret," in which "the Maestro and his Agents of Rhythm invite you to an electric multi-dimensional cabaret." During the day, Two70 is quieter, but in a fun twist while the ship sails out of Southampton, a full virtual orchestra will appear during high tea served there.

8. Families can stay together.

Clearly, Royal Caribbean was thinking about family cruisers when it designed its Quantum-class ships. We love the interconnected cabins that accommodate grandma and grandpa, mom and dad, and the kids. Multigenerational cruisers on Anthem of the Seas can book three interconnected cabins, each with its own living space and bathrooms, to provide together (or quiet) time. Cabins are connected via a vestibule and can sleep between eight and 10 people. Total square feet is a comfy 575, and when the balconies are combined, you get a whopping 216 square feet of outdoor space. Even those traveling with a smaller brood will like the Family Junior Suites, each with a half bath in addition to a full bath with bathtub -- a must for anyone traveling with toddlers. And yes, there are kids clubs, a large pool deck with kid-specific spaces and a massive movie screen.

9. You can forget the loved ones and cruise solo.

Until fairly recently, cruise lines haven't been particularly interested in catering to single travelers and, instead, focused on more lucrative couples or families. Those who cruise by themselves often are forced to pay nearly double the per-person rate non-solos pay. (Cruise lines call this fee the "single supplement.") Not so on Anthem of the Seas, which has 28 solo cabins that are fairly large (119 square feet) compared with single cabins on other cruise lines. We love the inclusion of a standard-size bathroom and roomy balcony (12 have this feature), which is not typical when it comes to single cabin options.

10. You'll have no problem staying fit.

A new generation of cruisers has cruise lines paying attention to fitness activities, an area that was traditionally more of an afterthought on older ships. Royal Caribbean is not an exception and has even upped the ante with one of the largest, most comprehensive gyms at sea. On Anthem of the Seas, passengers can try out hot fitness classes like TRX and spinning. While the classes require a fee, passengers still can stay in shape onboard for free at the fitness center, which is stocked with TechnoGym equipment. They also can head to the jogging track, where roughly three laps equal a mile. In an unusual twist for cruise ships, the track features an uphill section.