You may also like
Dismiss
Cunard Line vs. P&O Cruises
Cruise Classes: 21 Things You Can Learn on Your Next Cruise
Cunard Line History
10 Great Tips to Help You Relax on Your Cruise
10 Things to Do on Queen Mary 2
Cunard's Queen Mary 2 Kennels and How to Book Them for Your Next Cruise
Science Cruises: Astronomy, Nature and More at Sea
Fastest Cruise Ships in the World
How Reassuring are New Cruise Cancellation Policies Really?
From Simon Winchester to the National Symphony Orchestra: 2022 Queen Mary 2 Transatlantic Theme Cruises 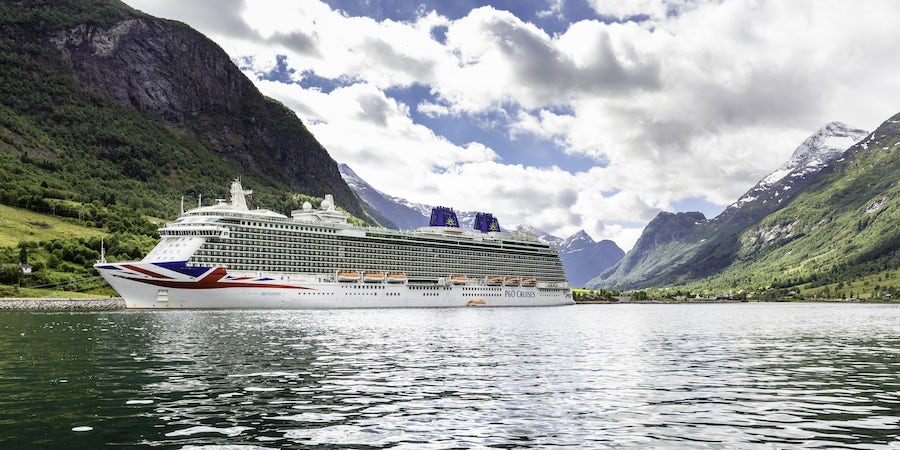 Much as we love to travel, us Brits often prefer a taste of home while on holiday. Whether it's a morning cuppa -- made with boiling water of course -- Marmite, fish and chips, British beer, artisan gin and tonic, or comedians tuned into our idiosyncratic humour; all of these things can add extra appeal to a cruise.

From classic cruise package holidays to traversing Scotland’s silky lochs and heather-filled Highlands, there are plenty of lines that offer the best of British sailing. Here is our selection.

Echoing the style and allure of cruising in days gone by, to many passengers the Cunard name alone epitomises Britishness. Having sailed from Southampton to New York and back since 1847, a transatlantic crossing with Cunard is the essence of life on the ocean wave, and today the Queen Mary 2 is the world's only real ocean liner -- a vessel primarily built for long sea journeys.

Onboard, Cunard ships boast a number of superlatives, including the biggest ballroom and largest library at sea, along with notable British partnerships. The line has an affiliation with the Royal Academy of Dramatic Art (RADA), arguably the most famous acting school in the English-speaking world, to present specially edited versions of renowned plays and adaptations of literary classics on transatlantic crossings. Passengers can even hone their own skills at RADA workshops. Other partnerships include the English National Ballet and Cheltenham Literary Festival.

2. P&O Cruises Is In Tune With British Tastes

Passengers have the choice of six -- soon to be seven when the line's newest ship Arvia launches at the end of 2022 -- P&O Cruises ships, each one adorned with red, white and blue livery, representing the line's British heritage.

Everything on P&O Cruises is geared to British tastes, including brand partners, decor, bars, food (think 52 varieties of British beer, artisan gins, fish and chips at the Beach House and curry nights) and entertainment.

There are 30 places to eat and drink onboard the line’s newest ship, the 5,200-passenger Iona, plus a gin distillery and the all-new 710 Club, overseen by none other than Gary Barlow.

With kettles in cabins and Sunday roast are just a part of the classic Fred. Olsen experience. Although Norwegian-owned, the line's four ships -- the 1,325-passenger Balmoral, 924-passenger Braemar, and the newest additions, the 1,338-passenger Bolette and 1,360-passenger Borealis -- are unashamedly British and as a result, virtually all the passengers are from the UK.

Satisfying the British sense of curiosity and exploring destinations in depth rather than just scratching at the surface, Fred. "brings the world closer" by docking in destinations larger vessels are unable to reach and increasing scenic cruising in between. Catering for the increasing number of Brits that travel alone, Fred. has fantastic facilities for solo travellers, from cabins with balconies to exclusive onboard events.

Life onboard has a British slant with West End-style shows, well-stocked libraries featuring familiar-name authors and accounts payable in pounds. The price of beer and drinks is refreshingly inexpensive, too, with no pesky service charge added. A standout treat is the white glove service afternoon tea (in addition to daily afternoon tea in the buffet restaurant) available a couple of times a week on every cruise and featuring dainty finger sandwiches, cakes and scones with jam and cream.

4. Saga Cruises Is a Refined & Elegant Line Dedicated to the Over 50s

In 2019 Saga Cruises entered a new era with the introduction of its first brand-new ship -- Spirit of Discovery -- which is also the first small ship built for the British market since the turn of the millennium, joined in 2020 by Spirit of Adventure.

Tailored specifically for British cruisers aged 50 and over, the new vessels feature a sumptuous decor, very similar to Viking’s upmarket ocean-going vessels. The line’s sailings include a high number of inclusions, with door-to-door transfers to the cruise port (within a 250 mile radius) all restaurants, WiFi, drinks and tips included within the cruise fare.

The 999-passenger Spirit of Discovery and Spirit of Adventure carry all the hallmarks that make Saga such a firm favourite with Brits -- right down to small details such as the Werther's Original sweets handed out on shore excursions -- coupled with exciting new elements. The pool deck has the feel of a traditional British lido, only more glamorous.

All cabins offer balconies, including 109 single cabins, and venues include The Club by Jools music lounge with a menu featuring Cornish crab cakes, Dover sole and steaks.

The ships have the all-new Coast to Coast restaurant, serving British and locally-sourced fish and seafood, along with Saga’s first theatre at sea, the Playhouse, with West-End style shows.

Launched in spring 2022, Ambassador Cruise Line became the first new British cruise line in the UK in 12 years, positioning itself as a traditional, value no-fly cruise line for the over-50s.

In terms of onboard amenities, Ambience has five restaurants including an outstanding Indian restaurant, Saffron; plus two cafes; nine lounges; a swimming pool; spa; fitness and leisure facilities.

Ambience's entertainment line up is geared towards Brits, with energetic shows in the Palladium and pub quizzes in the Purple Turtle, to more sedate classical tunes in the Botanical Lounge.

Owned by TUI, Britain's largest travel agency and tour operator, Britishness runs through Marella Cruises like a stick of rock. In fact, you won't find a line that's more British in terms of food, drinks and entertainment onboard. Marmite, HP Sauce, Tiptree jams and Cornflakes -- along with every other component to create a full English -- can be found on the breakfast buffet, along with shepherd's pie, fish and chips and curries later in the day.

Tipping has long been a thorny subject with Brits, but on Marella all gratuities are included in the fare. From May 2019 all Marella Cruises ships became all-inclusive as standard; not just limited to drinks, but including dining in at least four restaurants, too.

Marella introduced the first-ever Champneys Spa at sea -- plus a bar stocked with home-distilled gin and whisky brands -- when the 1,924-passenger Marella Explorer joined the six-strong fleet in 2018. The 1,814-passenger Marella Explorer 2, which debuted in spring 2019, features the Snack Shack, with the feel of a British seaside resort, and the golf-themed 19th Hole clubhouse bar.

Though Marella Cruises has offered Newcastle and Southampton sailings, the line excels in no-fly cruises, with packages including flights and transfer to the Canary Islands, Mediterranean and Caribbean.

Carrying a maximum of just 118 passengers, Noble Caledonia's trio of ships -- Island Sky, Caledonian Sky and Hebridean Sky -- recreate the atmosphere of a country house party, albeit one that's afloat. Many of the 70 plus crew members have been with the company for years, welcoming back loyal passengers; mostly discerning Brits looking to travel in quiet surroundings with like-minded shipmates.

Drinks with meals and all tips are included, as well as guides and drivers along the way. From spring 2019 complimentary Wi-Fi was added to the inclusions on all three vessels -- one less charge for cruisers -- and any extras are payable in pounds.

Showcasing high quality and attention to detail, the immersive global itineraries appeal to the culture vultures. Passengers can also expect to hear from eminent guest speakers such as Japan expert Reverend Dr Judith Thomas, honorary fellow of Trinity College Cambridge and former Bishop of London Lord Chartres, and Major Gordon Corrigan, military historian and the author of a number of books on subjects ranging from the Hundred Years War to the Peninsula War to the First and Second World Wars.

8. Hebridean Island Cruises Is the Go-To Line for Plush Sailings in the Highlands

Well, if it's good enough for Her Majesty the Queen, who in 2006 celebrated her 80th birthday on Hebridean Princess and chartered the ship again in 2010, then it's certainly going to be acceptable for her subjects. The Hebridean Island Cruises's one ocean-going vessel carries 50 passengers around Scotland in style, and around 95 percent of them are British. This upmarket company has links with The Arts Society and members benefit from fare savings in addition to supporting the society by booking a Hebridean cruise.

The Queen famously never carries cash, so it's probably no surprise that Hebridean Princess offers completely all-inclusive sailings; a big appeal for Brits who don't mind paying for an expensive holiday (nine-night sailings can go up nearly £13,000) but object to a sting in the tail and having to fork out for tips and extras at the end.

Another inherent fear among many British cruisers is dining with strangers, and although the onboard atmosphere is very convivial, solo passengers can choose to dine on their own if they wish or, conversely, join a table hosted by one of the ship's officers. Food and drink showcase local products, naturally including Scottish whiskies, and no cruise is complete without a recital of Robert Burns' "Address to a Haggis".

Crew members taking the tender to fetch morning newspapers is part of the attention to detail that is part and parcel of the personal service on The Majestic Line. The fleet comprises four 11-passenger vessels, Glen Massan, Glen Etive, Glen Shiel and Glen Tarsan -- the latter of which was featured in an episode of Cruising with Jane McDonald.

Glen Massan and Glen Tarsan are beautifully restored classic fishing vessels, converted to cater to the comforts of fare-paying passengers, and the others were specially built for The Majestic Line. All of them are filled with traditional wood and gleaming brass along with a country house-style decor that lends itself to the relaxed onboard atmosphere and all four explore the lochs and islands off Scotland's western coastline.

Meals are a highlight and showcase local produce that is often unique to the area. Meat comes from the three-generation family-owned Jackson Brothers Master Butcher in Oban and seafood is sourced within a six-mile radius of Oban by Watts Fish, another small family business. Passengers can also fish from the boats, and creels are laid down for lobster, crab and crayfish. Anything caught will feature at the next meal, creating a wonderful farm -- or fish -- to-fork experience.