You may also like
Dismiss
Galapagos Islands Cruise Tips
Best South Pacific Cruises for Nature-Lovers
Top 9 Diving Tips for the Galapagos Islands
7 Cruise Excursions That Will Change Your Life
How to Prepare for a Snorkel and Dive Cruise
5 Things to Know About Family Expedition Cruising
8 Exhilarating Shore Excursions
What's Your Small Ship Match?
Why a Galapagos Cruise Is the Best Value for Your Bucket-List Adventure 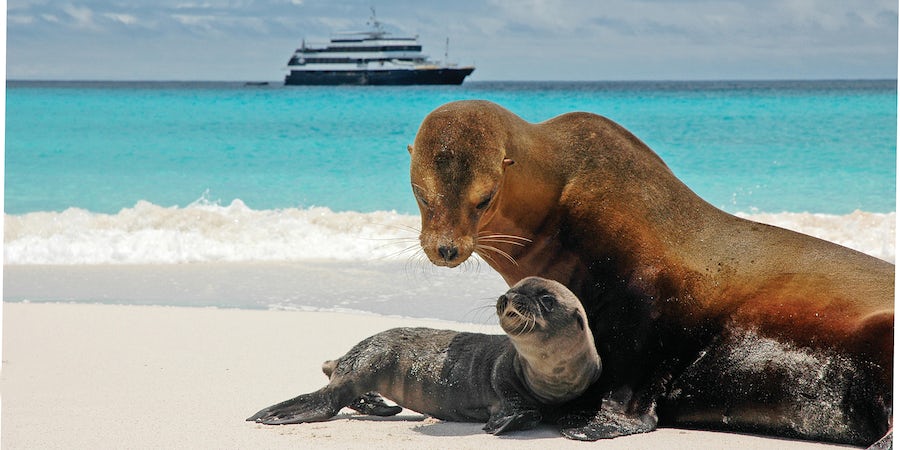 For travelers who love wildlife, a Galapagos cruise should be at the tippy-top of the bucket list. Not only is this remote chain of Ecuadorean islands home to some of the world's rarest animals -- tropical penguins, anyone? -- but its relative isolation has also engendered a community of creatures who are strikingly unafraid of humans. Forget the telephoto lens; on these islands, you'll be up-close and personal with hundreds of animals during a weeklong cruise.

Round a curve, and you might come upon a waved albatross right in the hiking path, sitting serenely for several minutes while you and your fellow tourists snap photos just a few feet away. Hop in the water with a snorkel and mask, and you might find yourself swimming alongside a mother sea lion and her pup. Walk along the coast, and you might spot Sally Lightfoot crabs scuttling along the rocks, a blue-footed booby preening its feathers and a pile of marine iguanas soaking up the sun.

I spotted all of these animals and many more during a week aboard International Expeditions' 32-passenger Evolution. The bulk of this cruise is focused on wildlife and the ecosystem that supports it, from daily hikes and snorkeling excursions to evening lectures on the islands' conservation and climate, all led by experienced naturalist guides. By the end of the week, we'd learned why certain species were in danger, how to tell the difference between older and younger tortoises and what creates a flamingo's dazzling pink color. (Curious? This feature has the answers.)

Here are 12 amazing animals to keep an eye out for during a Galapagos cruise.

Why They're Cool: These magnificent birds are unique to the Galapagos and have a wingspan of nearly eight feet. When you land at Punta Suarez, you'll be walking along a trail through their breeding and nesting grounds; along the way, you might see a mother sitting on her egg or a pair of birds clacking their long beaks together in a common courtship ritual. Toward the end of the trail, you'll reach a dramatic cliffside where you can watch the albatrosses step to the edge, unfurl their wings and set sail on the wind currents.

Where to See Them: Espanola (April to December)

Why They're Cool: Endemic to the Galapagos Islands, these are the world's only marine lizards. You might see them swimming in the ocean in search of red and green algae, their main source of food, but they're most commonly spotted sprawled out on the rocks, warming themselves in the sun. They'll let you get pretty close, but be warned: they spit! (No, it's not something you said. They're just clearing salt water through their nostrils.)

Where to See Them: Along rocky coasts and cliffs throughout the Galapagos

Why They're Cool: There's a spot on Santa Cruz Island called Cerro Dragon, or Dragon Hill, that's aptly named after these nifty-looking reptiles, which come in a striking array of green and gold shades and can grow more than three feet long. The iguana populations on several islands were severely threatened by introduced species like feral dogs (who ate the iguanas) and goats (who ate the vegetation the iguanas relied on for food), but the eradication of these predators has allowed their numbers to rebound in recent years.

Why They're Cool: It's hard not to love sea lions, the islands' largest and most charismatic mammals. Their size (up to 550 pounds) and distinctive bark make them easy to spot. You can occasionally find them in unexpected places, like sleeping on a park bench or flopped on a dock with people and boats bustling around them. But you'll usually see them lazing on the beach or romping in the sea; the pups are particularly fun to watch when they body surf on the waves.

Where to See Them: Beaches and coastal rocks just about everywhere

Why They're Cool: This large sea bird is best known for the male's vibrant red throat pouch, which balloons dramatically to attract a mate during breeding season (typically during March and April, but breeding can occur throughout the year). Females are distinguished by their black and white coloring. It's common to see frigatebirds wheeling overhead while at sea; they may even alight in your ship's rigging to rest.

Where to See Them: Throughout the islands with the main nesting colonies on Genovesa and North Seymour

Why They're Cool: Think penguins, and you probably picture ice, snow and frigid weather; in the Galapagos, you'll find the world's only tropical penguins. They're small -- just 14 inches tall -- and typically spotted on the rocky coastlines of Fernandina and Isabela islands. Unfortunately, their population is endangered; because they reproduce slowly, they have a hard time recovering from the islands' occasional El Nino weather events, which bring warm, less nutrient-rich waters.

Where to See Them: Fernandina, Isabela, Bartolome, Floreana

Why They're Cool: Viewed up close, these ubiquitous crabs are absolute stunners, their shells decked out in vivid shades of red, orange and blue that look like they've been applied with an artist's brush. They're fun to watch, too, as they nimbly pick their way along wet, slippery coastal rocks. (In fact, their swift, sure movements are thought to have earned them their name.

Where to See Them: On rocky coastlines throughout the islands

Why They're Cool: It's not uncommon to spot the shell of a passing sea turtle from your ship or panga, but it's 10 times cooler to actually get in the water and swim with these gentle creatures. Wearing a snorkel and a wetsuit, you'll skim along the surface as the turtles glide serenely beneath you, sometimes just a few feet away. Others hulk like rocks along the sea floor.

Where to See Them: The waters off of Isabela, Fernandina and Santa Cruz

Why They're Cool: Deep in the lush highlands of the Galapagos' wetter islands, you'll find these slow-moving giants, weighing up to 550 pounds and living up to 150 years! (Fun fact: The tortoise's shell gives hints about how old it is; older animals have shells that have been worn smooth from years of rubbing up against bushes and rocks.) Because baby tortoises are vulnerable to predators introduced by humans -- mainly rats and dogs -- many of them are now raised in captivity by the Charles Darwin Foundation until they're about four years old, when they're returned to the wild with a better chance of survival.

Where to See Them: Santa Cruz (in the wild and at the Charles Darwin Research Station in Puerto Ayora), San Cristobal, Isabela

Why They're Cool: The flamingos in the Galapagos are said to be the most brilliant shade of pink of any flamingo species, thanks to their diet of brine shrimp (rich in the carotenoids that create the pink pigment). You'll spot them stalking on their impossibly spindly legs through shallow lagoons, feeding with their heads upside down in the water.

Where to See Them: Isabela, Santa Cruz, Floreana, Santiago, Rabida

Why They're Cool: At first glance, these small birds don't look like anything special; there are at least 13 species of them in the Galapagos, all in varying shades of gray, brown and black, but they played a key role in scientific history. Charles Darwin's observation that there were similar, but not identical, species of finches on different islands led him to theorize that they'd evolved in isolation from a common ancestor. Today you can challenge yourself to identify the variations between species as you move from island to island.

Where to See Them: Throughout the Galapagos

Why They're Cool: Did you know that the color of those famous blue feet can tell you about the bird's sex life? Males who haven't mated in a while will have more vibrantly colored feet to help attract a partner, while the feet of more "profligate" birds, as our guide put it, are often a more faded shade of blue. Another, not-so-fun fact: The population of blue-footed boobies is plunging. Scientists pin the blame on declining numbers of sardines, the boobies' main food source, likely due to overfishing or global warming. Fortunately, the Galapagos' other two species -- red-footed boobies and Nazca boobies -- are faring better.

Where to See Them: North Seymour, Espanola, San Cristobal