You may also like
Dismiss
10 Reasons Why Carnival Splendor Is the Cruise Ship for You
MSC vs. Royal Caribbean in the Caribbean
MSC Meraviglia vs. Harmony of the Seas
Meraviglia Class vs. Seaside Class on MSC Cruises
Pictures of Sky Princess
9 Free Things to Do on Norwegian Encore
Pictures of Norwegian Encore
9 Reasons to Get Excited About P&O Cruises' Iona
Will I Have to 'Social Distance' on My Next Cruise? 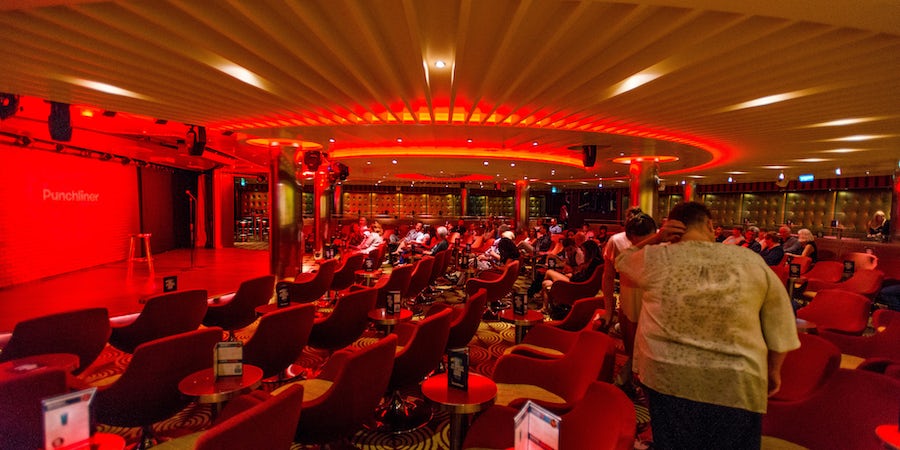 For many cruise passengers, one of the best parts of their voyage isn't the elaborate buffets, the casino bets or the booze. It's the belly laughs.

Most major lines showcase humor by way of comedy clubs or guest comedians who perform in the main or secondary theater venues. Forget about the stuff-food-in-your-face jokes; the performers and the material can be top-notch -- with a number of lines hosting big-name comedians from Las Vegas to New York, who come onboard to do a series of shows in between appearances at top clubs and late-night TV shows.

But not all lines and ships use comedy the same way. Smaller vessels and those carrying many international, non-English-speaking passengers skip the jokes or schedule the visual humor of jugglers and mimes. Follow this primer to find the ships that sail with the kind of laughs you crave.

What's Offered: Punchliner Comedy Clubs are available on all Carnival ships, averaging 20 shows per ship, per week. Cumulatively, the fleet's clubs present more than 20,000 shows a year, making Carnival the largest operator of comedy clubs in the world, according to its executives. Even better: Each of the 20 shows presents new material, thus keeping "laughaholics" happily coming back for more each night.

Style of Show: At Punchliner, a standup comic takes to the stage each night for two or more shows. While families may attend the earlier set, much of the material will come across as funny to those around age 14 and older. Only passengers 18 and older can grab seats in the later show because performers might use R-rated language or comment on sex and other adult topics.

What's Offered: Cruisers on any of Celebrity's ships can find comedy shows in the main theater, throughout the week. Celebrity Constellation takes comedy up one notch further, with its production show "Elyria." The adults-only show works humorous routines, as well as flashy costumes and light effects, into performances by acrobats, singers and dancers.

Style of Show: While the comedy shows on other ships are standup, ranging from family friendly to adults-only, "Elyria" boasts more of a burlesque vibe, with more emphasis on the visuals rather than the comedy.

What's Offered: Disney Cruise Line keeps comedy family-friendly and apolitical. To do that, Disney relies heavily on humor that comes with a physical or visual element. Disney Cruise Line is also known for its excellent quality Broadway-style shows, some of which are quite funny. A few late-night shows target adults only.

Style of Show: Various theaters and lounges feature ventriloquists, jugglers and others using visual humor, such as comedian magicians.

Style of Show: HAL's comics must be funny without spewing foul language or presenting adults-only content. That means no raunchy sex jokes, and the multinational crowd precludes piquant political commentary.

Style of Show: Shows in the main theater range from family-friendly to adults-only. Meanwhile, MSC Seaside's improv show is reserved just for adults -- with unscripted sketches being fueled by audience suggestions.

Style of Show: Standup comics entertain in Headliners. Typically, the earlier show is family-friendly and the later show targets adults. Only those 18 and older are admitted.

What's Offered: Most cruises will feature a main comedy show every week in the Princess Theater. A second show will be offered in either the Explorer's Lounge or Vista Lounge.

Style of Show: Standup comics might perform family-friendly material as part of the main show and comedy that has more of an edge in the Explorer's Lounge or Vista Lounge, depending on the sailing.

What's Offered: Royal Caribbean, a leader in so many onboard activities -- deckside surfing, rock climbing, ice skating -- focused more attention on comedy with the launch of its Oasis-class vessels. Both Oasis of the Seas and Allure of the Seas ignite giggles at Comedy Live, while Harmony of the Seas and Symphony of the Seas host comedians in The Attic. On other ships, when the majority of the clientele hail from North America, comics are typically found in the main theater (or in Two70 on Quantum-class ships).

Style of Show: The comedy shows held in the Oasis-class ships' dedicated venues are more geared toward adults and reservations are required despite the shows being free. Skits in the main theater tend to be more family-friendly, though age restrictions always will be noted in the cruise planner.

Related: Cruise Activities for Kids: What to Expect