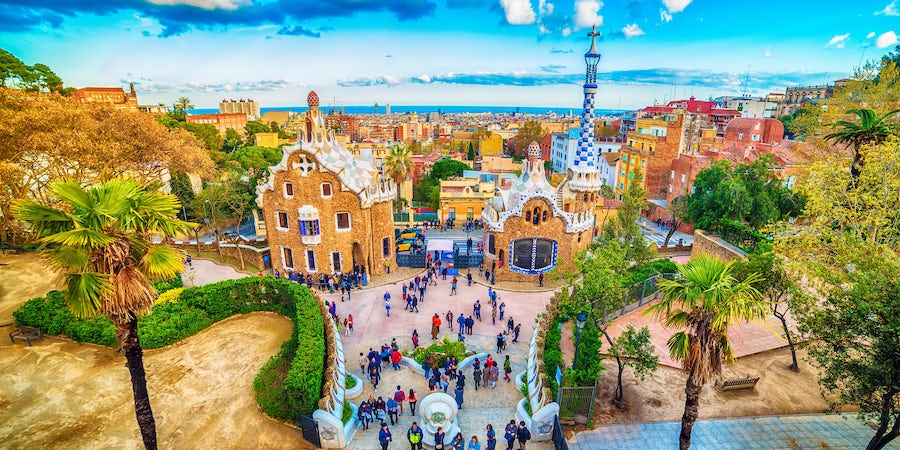 The Western Mediterranean has among the greatest concentration of art, architecture and archeological ruins in the world. As you sail through the region, thousands of years of history will be unfolded layer by layer. In fact, there's so much to take in that you might not know where to start. Here are our must-see picks for culture vultures cruising the Western Med.

It would be a crime to visit Barcelona without witnessing the otherworldly designs of Antoni Gaudi, the figurehead of Catalan Modernism. Gaudi was born in the Spanish city in 1852.

Gaudi's fantastical Gothic-style cathedral, Sagrada Familia, is one of Barcelona's biggest attractions. This still-unfinished church is unlike anything you've ever seen, with an interior designed to resemble a forest. Throughout the structure, there are whimsical spiral staircases, stunning stained glass, bell towers and bridges.

Another Gaudi must-see is the exterior of Casa Mila, also known as La Pedrera -- a curvy apartment building that looks like something out of a Tolkien novel. Also worth a visit is Casa Batllo, Gaudi's colorful ode to the legend of St. George the dragon slayer, complete with a roof mimicking dragon scales.

Tip: Most cruise lines run half-day tours that visit all of the stops above.

The most striking feature of Marseille's Basilica of Notre Dame de La Garde is the 30-foot gold statue of the Virgin Mary, sitting on a 180-foot bell tower and protectively looking out over her city. Locals call her la bonne mere or "the good mother." The Roman-Byzantine-style church's mosaics were restored in 2008 after years of damage from candle smoke and the impact of bullets during the liberation of Marseille in 1944; bullet holes from the battle are still visible on the northern facade of the basilica.

Tip: The basilica is where you'll get the best view of Marseille.

The colorful southern coast of France was a muse for French artist Henri Matisse, who moved to Nice in 1917 with the hope that the sunny climate would cure his pneumonia. He stayed until his death in 1952. The city turned a 17th-century villa into a museum showcasing works from various stages of his career. The paintings are complemented by black and white photographs of Matisse at work, as well as his personal belongings.

Tip: Nice is also home to Musee Marc Chagall, and it has stunning examples of his religious-themed work.

One of the oldest and most famous art museums in the world, the Uffizi is home to Italy's largest and most impressive art collection. The name of the museum, Italian for the word "offices," comes from the palace's original use as an office building, designed by the great Giorgio Vasari for aristocrat Cosimo I de' Medici. It was then used to display the Medici family's large collection of paintings and sculptures and, thus, the Uffizi was born.

Highlights of the museum's works include the Madonna of the Goldfinch by Raphael, the Birth of Venus and Primavera by Sandro Botticelli, one of the three paintings that make up Battle of San Romano by Paolo Uccello, Michelangelo's Doni Tondo and Titian's Venus of Urbino Bacchus by Caravaggio. For a truly special experience, book a private tour of the Vasari Corridor, the art-filled secret passage over the Ponte Vecchio that links the Uffizi to the Palazzo Pitti.

Tip: The Uffizi is famous for four-hour-long ticket lines during the busy summer months, so definitely book an organized excursion, or purchase tickets online ahead of time.

How could you come to Florence and not pay your respects to the most famous man in the city? Seeing Michelangelo's David sculpture at the Accademia is a must. While some 6,000 people go there daily for David, they stay to see Michelangelo's lesser-known sculptures Slaves (an unfinished piece) and St. Matthew. The collection of Florentine paintings ranges from the 13th to the 18th centuries.

Tip: Taking photos of the David is a big no-no, but you can shoot pictures of the replica outside the building.

Vatican City, a country unto itself and the seat of the Catholic Church, is a don't-miss for any visit to Rome, and it's well worth the trip into the city from the port of Civitavecchia.

The Vatican Museums, began by Pope Julius when he put his personal collection of sculptures on display, are a series of museums holding some of the world's greatest art treasures. The very greatest is the ceiling of the Sistine Chapel, Michelangelo's nine-panel masterpiece depicting God's creation of the world, man's fall from grace and other biblical scenes.

St. Peter's Basilica was completed in 1626 and built on the site of the Old St. Peter's Basilica, a 4th-century church erected over the burial site of Saint Peter. The basilica's nave is the highest of any church, and its interior is elegantly decorated with gold and marble.

St. Peter's dome was also designed by Michelangelo, as was the Pieta, another must-see inside.

Tip: Be sure your knees and shoulders are covered (as a sign of respect), or you won't be allowed into the basilica.

This is the Rome you read about in history books and watched on screen in "Spartacus" and "Gladiator." A symbol of Imperial Rome, the Colosseum once held more than 50,000 spectators for gladiator contests, mock sea battles and drama performances of Greek mythology.

Just west of the Colosseum, the Roman Forum was, for centuries, the center of Roman life -- first as a marketplace and then as a venue for elections, speeches, government functions, trials and celebratory processions. Exploring these two historic sites alone will give you a good grasp of what life in the Roman Republic was like and how it influences everything from how modern Western cities are constructed to how the United States is governed.

Tip: While it can be tempting to see these sites on your own, take an organized excursion, or hire a private guide. Most are talented storytellers who can provide historical context for the ruins you're seeing.

Italy's most prestigious archeological museum can be found in Naples. Built upon the Farnese Collection, which was moved there in 1777 from what was the Royal Bourbon Museum, the National Archeological Museum is the perfect complement to a stop at the nearby archeological ruins of Pompeii or Herculaneum.

At the museum, everyday items and symbolic sculptures from those ruins are housed. They include glassware, mosaics, frescoes, jewelry, coins and sculptures (like the famous Doriforo). The Egyptian collection was curated in 1920s from collectors like Cardinal Borgia. There are even exhibits dating back to the Paleolithic Era.

Tip: The museum's secret room is reserved for adults only, as it houses examples of Roman-era erotica, as well as sexually explicit finds from Pompeii. The room opened in the mid-19th century but was then closed for a century or so, due to controversy.

In the year 79 AD, the city of Pompeii, home to 20,000 people, was a vibrant and booming center of trade. All of that changed in a matter of minutes when Mount Vesuvius erupted, covering the city and its inhabitants in 3 feet of mud and ash.

Related: 10 Cool Things About Visiting Montserrat on a Caribbean Cruise

Now Pompeii is a thriving Roman city frozen in time and offers one of the best examples of what daily life was like during the days of the Roman empire. For more than 250 years, tourists have been walking down the preserved streets of Pompeii and peeking into fresco-laden buildings. However, the most startling site at Pompeii is that of the ash-encased bodies, which reflect the exact moments when life was transformed forever.

Tip: If you're overnighting in Naples or your sailing calls there before ending in Civitavecchia -- just two hours away -- look into Pompeii's special nighttime tours during the summer.

Palermo is home to Italy's second-most famous chapel (after the Sistine Chapel at the Vatican), the Cappella Palatina. About half the size of the Sistine Chapel, this 12th-century chapel in the city's royal palace, Palazzo dei Normanni, is filled with brilliant mosaics depicting the lives of the saints -- in particular, St. Paul and St. Peter, to whom the chapel is dedicated.

Byzantine mosaics of this quality can only be seen elsewhere in Istanbul or Ravenna in northern Italy. If you can tear your eyes away from their sparkle and shine, you'll be mesmerized by the colorful cosmati flooring with geometric inlay at your feet. The facets of the chapel -- Byzantine mosaics, Norman architecture, Arab arches -- reflect the many cultures that have influenced both Palermo and Sicily.

Tip: Palermo is the place to taste the world's best cannoli (fried pastry dough filled with a sweetened ricotta).