You may also like
Dismiss
Cruise Classes: 21 Things You Can Learn on Your Next Cruise
Champneys Luxury Health Spa on Marella Cruises (With Prices)
Planetarium on Cunard's Queen Mary 2 Cruise Ship
5 Mind-Blowing New Cruise Attractions of 2018
15 Things You'll Regret Not Doing on a Cruise
Science Cruises: Astronomy, Nature and More at Sea
Princess Cruises' Discovery at Sea Program
8 Creative Ways to Work Out on a Cruise Beyond the Gym
Solar Eclipse Cruises in 2020 and 2021
Why Germ-Zapping Robots and AI Technology Could Be the Future For Cruise Ships 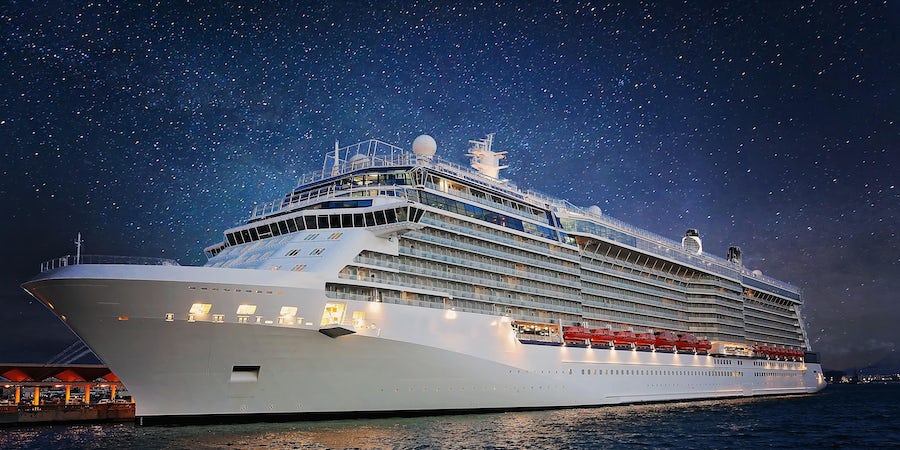 10 Tips for Shipboard Stargazing on a Cruise

A cruise would seem to be the perfect place to do some stargazing. The Earth's oceans have pristine, dark skies, where light pollution does not impede your view of the dimmer stars, the bright swath of the Milky Way, dim meteors and satellites, and the faint glow of the Andromeda Galaxy 2 million light-years away. However, the brightly lit top decks of cruise ships can get in the way of your sky-watching, especially if you're an aficionado who wants more than just "better than at home."

If you want to seek out constellations or simply be amazed by the night sky, here are some suggestions for taking advantage of stargazing opportunities on your cruise vacation -- no telescope required.

Head to the middle of the ocean, and your cruise ship will likely be beyond the reach of land-based light pollution, allowing you to see fainter objects in the sky than you might see ashore. World cruises and ocean crossings are good bets for escaping the lights of land, but any itinerary that takes you more than a couple of dozen miles from shore might give you great stargazing opportunities.

2. Plan your cruise around the lunar cycle.

It's not just human-created lights that can block your view of the stars. The light of a full moon can prevent you from seeing faint objects (including dim stars, meteors and satellites). For the best stargazing, time your cruise to coincide with the new moon, when the moon begins its cycle and can't be seen at night. (At this time, the moon turns its unlit side toward Earth and crosses the sky in the daytime with the sun.) This is the darkest time of the lunar cycle and the best for viewing celestial objects.

3. Choose the right itinerary and time of year.

If you want to see stars, sailing the Baltic or Alaska around the summer solstice, or Antarctica around the winter solstice, is not the best idea, as the nearly round-the-clock daylight means it's never dark enough for stars to come out. Choose a sailing during a region's dry season (which usually coincides with its high season), and you'll typically have fewer clouds at night, giving a better view of the entire sky and a more pleasant time on deck. Think Caribbean December through April and Mediterranean May through September.

Astronomy magazines and websites will let you know about upcoming notable astronomical events like meteor showers (such as the Perseids in August and the Geminids in December) and eclipses, which planets you might see and which bright stars might appear near the moon during your cruise. You can also find out when the International Space Station or Hubble space telescope might be visible from your sailing region.

5. Find the darkest part of ship.

Ship lights are a thorn in the side of avid stargazers, but that doesn't mean you can't see a star-filled sky from the outside decks. "I usually advise guests to find a viewing area forward of the ship's funnel," says Howard Parkin, resident astronomer for Viking Ocean Cruises.

The area forward of the bridge is always kept dark when the ship is at sea, but unfortunately most of the large ships built in the 21st century no longer have public areas and promenade decks there. Cruise Critic readers suggest trying the helipads on select Royal Caribbean ships and the "secret decks" forward on Carnival ships for onboard spaces away from lights.

Generally, positions forward will be windier, and those aft will be brighter (staircases especially will be lit for safety reasons) and may have smoke from the stacks blocking part of the sky. One other thing to note: the Deck Department will generally hose the decks down at night when they don't expect passengers to be out on deck, so watch for hoses and errant spray.

"One of the most useful items I find effective onboard are seasonal star charts or planispheres (but always make sure they are for the correct geographical area)," says Parkin. These will help you find the bright stars and planets. Not sure where you are? Many cruise ships have a channel on the in-stateroom TV that includes the exact longitude and latitude of the ship during the voyage.

A good beginning astronomy book can also help you understand more about what you're seeing. Look for one with monthly sky guides, showing positions of the planets, stargazing tips and information about the constellations. (We like the "Stars and Planets" books from DK Publishing and Smithsonian.)

So-called "planetarium" apps allow users to identify stars and planets just by pointing their devices at the sky. Parkin recommends the Sky Guide app. Other handy apps can be used to identify satellites. (You need to connect to a network to download satellite orbital elements, but you can do this before your voyage or when ashore.) You can also predict northern lights activity hours or days in advance, but you will need to connect to a network for this to be useful.

If your device has built-in GPS, you can take advantage of applications that don't need to connect to the ship's cellphone network (at roaming rates that can be quite expensive).

If you just want to be awed by the heavens on a dark night, all you need is your naked eye. For more of a close-up, and to bring fainter objects into focus, consider packing a pair of binoculars. While a telescope can be cumbersome for travel and unstable on a moving ship, binoculars are packable, have a wider field of view than a scope and can give amateurs enough magnification to satisfy their stargazing needs. Plus, depending on where you're cruising, they can come in handy for daytime sightseeing as well (such as spotting wildlife).

9. Book a cruise with a resident astronomer.

Cunard's Queen Mary 2 and Viking Ocean Cruises' Viking Orion not only teach about the stars in their onboard planetariums, but they regularly bring astronomers onboard to give presentations and lead stargazing sessions. Cunard partners with members of the U.K.'s Royal Astronomical Society, while Viking hires its own resident astronomers. During these official stargazing sessions, the astronomers will work with the captain to turn off some of the ship's exterior lights to create the darkness needed for excellent sky-watching. Princess Cruises also offers stargazing as part of its Discovery at Sea programming.

Other cruise lines might bring astronomy lecturers onboard select sailings, and there's a good chance they'll lead a stargazing session onboard. Look for these guest speakers on long sailings or ones with many sea days. You can often find advance information about lecturers on a cruise line's website under the section on enrichment programming.

If you want to plan your cruise around celestial sights rather than land-based ones, look for an astronomy theme cruise. The most well known of these are total solar eclipse cruises, which position the ship in the best spot -- usually in the middle of an ocean -- to get unimpeded views of a total solar eclipse. While not technically about stars, you'll find astronomy experts onboard and likely some stargazing sessions during the trip.

If you want to see the northern lights, you could try your luck with a North Atlantic , Alaska or Scandinavia cruise after mid-August (when you once again have darkness late at night) and when there is little moonlight. Real enthusiasts choose one of Viking Ocean's "In Search of the Northern Lights" cruises to Norway in January, February or early March, or any of Hurtigruten's 12-day Norway cruises between October and March, when the sky is dark more than it's light.