You may also like
Dismiss
Top 9 Diving Tips for the Galapagos Islands
Coastal Cruise Tips
The Best Month to Cruise Hawaii
How to Prepare for a Snorkel and Dive Cruise
5 Things to Know About Family Expedition Cruising
8 Exhilarating Shore Excursions
23 Things Cruisers Love to Complain About
How To Cope With Cruising's Pause? Plan Far, Far Ahead 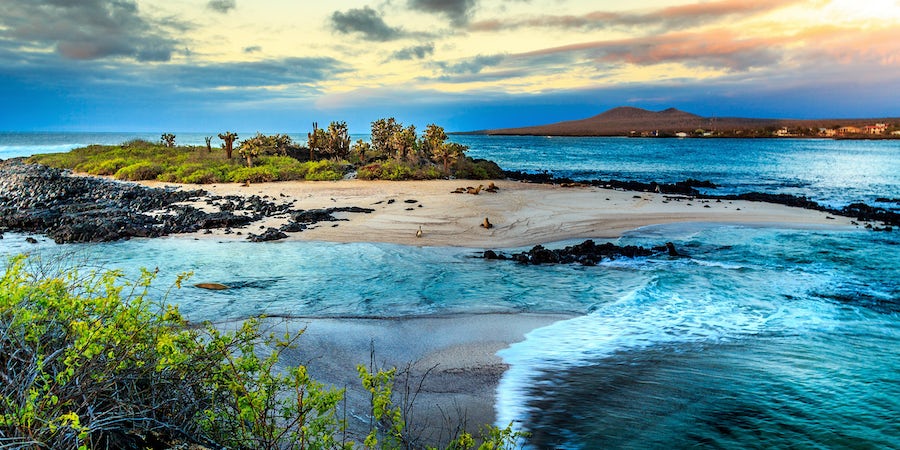 Be you bucket-lister or wildlife buff, the idea of the Galapagos pulses with animal magnetism. A visit to the Ecuadorian islands is a science fiction adventure -- ship as time machine visiting a prehistoric land of volcanic eruptions, alien cactus trees, swimming iguanas, flightless birds and tortoises of lumbering immensity. A cruise, which lets visitors efficiently trace remarkable evolutionary variations from island to island, is the most immersive way to see the destination in a three- to 14-night stretch.

Given the Galapagos National Park's "sunrise to sunset" rule, the cruise experience is highly structured, almost military-like (though you can opt out of any activity without threat of pushups). Wake up: 0700\. Breakfast: 0730\. First landing: 0830\. And so forth until you hit the pillow after a post-dinner briefing and pisco sour.

There are typically two excursions per day, and if you participate in every hike and snorkel, expect limited down time -- and expect to be enthralled but slightly exhausted by debarkation day. It's a sacrifice worth making. 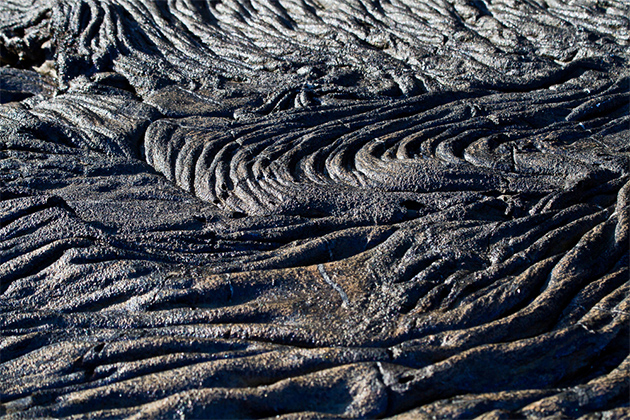 The Galapagos is a year-round destination, and nature-loving visitors can expect to be stunned by the flora and fauna in any month. Still, there are two main "seasons," each of which has its draws and drawbacks.

High season, when families often push occupancy levels to the max, is considered mid-June through early September and mid-December through mid-January. From June through November, the Humboldt Current brings colder, nutrient-rich water and (slightly) cooler land temperatures. Average highs are typically around 80 degrees Fahrenheit. Winds and seas tend to be a bit rougher. Skies are often overcast, but rain is uncommon. The change in water quality attracts fish and sea birds, making this a fantastic time to snorkel. Given the colder water temps -- sometimes in the low 60s -- wearing a wetsuit is a smart move for snorkelers hoping to stay in the water longer. This is also the mating season for the blue-footed boobies and waved albatrosses.

December through May, the air and water temperatures are typically warmer, in the high 80's, and seas are calmer. Light rain falls for a short period of time each day, but the spritz is balanced with potent sunshine. Sun-worshippers may be tested in February and March, when equatorial heat scorches the lava. Land vegetation explodes, with flowers coming into bloom. Several species of birds mate during this period, and sea turtle nesting also occurs.

El Nino, a weather phenomenon made famous on SNL by Chris Farley, can upend weather-related expectations, bringing a tropical feel to the surroundings at unexpected times.

Though all vessels are fundamentally utilitarian -- nature takes center stage -- there is a huge difference between the low end, referred to as "economy class," and the high end, called "luxury class." Luxury class options like Lindblad, Celebrity Cruises and Metropolitan Touring, for instance, feature lounges, hot tubs and well-appointed cabins. Almost half of Silver Galapagos' cabins have true balconies, a rarity in the region, and all passengers have butlers. Budget options, many of which can be booked last-minute in the Galapagos at a substantial discount, feature cramped quarters and fewer amenities. Some choices in this class will lack hot water and air-conditioning.

The higher-end ships also feature Level 3 guides, the highest designation afforded by Galapagos National Park. These guides will have university degrees in biology, tourism or a related field; six-plus years' experience guiding in the Galapagos; fluency in English; and will have passed the Park's Level 3 training. 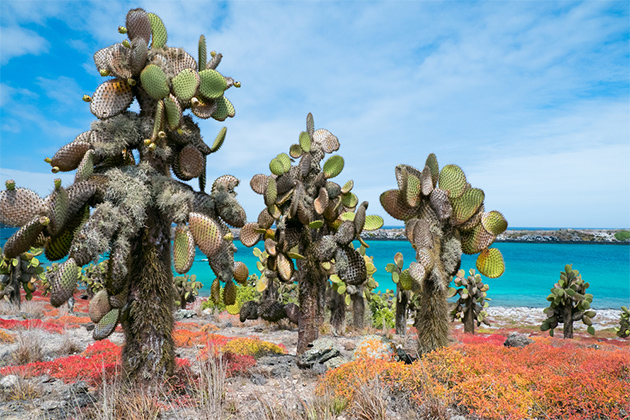 Every licensed vessel sailing the Galapagos follows a 15-day route established and approved by Galapagos National Park. During that period, a boat may not visit the same site twice, with the exception of the Charles Darwin Research Station on Santa Cruz. How lines segment the 15 days can vary, but four-, five- and eight-day options are the norm. Passengers can often combine these segments into 11-, 12- and 15-day cruises.

All boats basically follow the same protocol, regardless of itinerary: Island visits and water-based activities are done during the day, and the majority of navigation is done overnight.

All cruises begin or end at one of two islands with an airport: Baltra, a U.S. military outpost during WWII turned Ecuadorian air base, or San Cristobal, the Galapagos' second most populated island and home to the capital of the province, Puerto Baquerizo Moreno.

Because the approach to cruising has been standardized, picking the right itinerary has a lot to do with cruisers determining which visitor sites are on their must-visit lists. Port research -- particularly photo searching -- is key. Keep in mind that the longer the cruise, the farther west the ship will reach. That's not to say the western islands are better -- it's a matter of personal preference. When you cruise is also an important consideration (see below).

There is one main exception: "Live aboard" boats carrying experienced divers are the only craft to visit the northern islands, Darwin and Wolf, prime spots for scuba enthusiasts. At Darwin, where there is no landing site, schools of hammerheads are known to congregate.

Galapagos cruises are often paired with land-based visits to Peru's Machu Picchu, the Ecuadorian rainforest or other South American hotspots. Most passengers will at least spend a day or two exploring Quito or Guayaquil pre- or post-cruise. It's basically necessary, given the flight logistics. 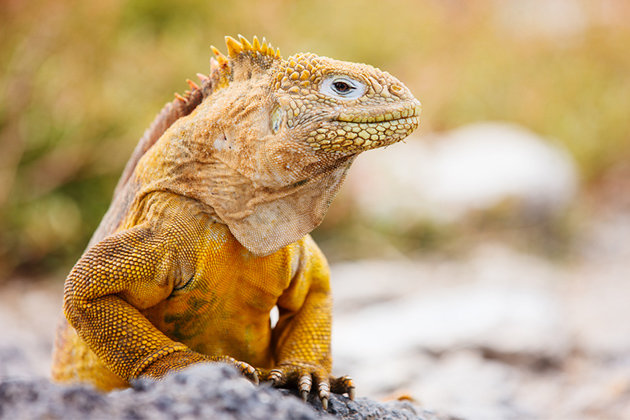 Every one of the Galapagos' official visitor sites has something unique to offer, but travelers will be able to experience the greatest hits -- sea lions, marine iguanas, lava lizards, endemic birds -- on the majority of islands. Here are a few of the most popular spots.

Santa Cruz features the Galapagos' most populous "city," Puerto Ayora, and is the island chain's main tourism hub. The island offers visitors the only chance to experience the Galapagos' interior high-lands, one of a few places to spot giant tortoises in their natural habitat. The Charles Darwin research center, a visit to which is included on every cruise, is also located there.

Champion Islet's waters transform into an aquarium teeming with life during September and October, when the water temperatures drop. Sea plants thrive, which brings the marine creatures, which in turn brings in the sea birds. Sea lions, especially the curious juveniles, often zip past and around the awkward humans in fins and masks.

South Plaza encompasses less than one-tenth of a mile in area and is one of the Galapagos' smallest visitor sites. But the tiny island, which was formed by volcanic uplift, makes a powerful impression with its color-changing ground vegetation, sea birds and colony of Galapagos land iguanas. The successful male iguanas can be seen standing guard in front of a cactus tree, waiting patiently to provide a hungry female with a piece of prickly fruit.

Rabida makes a bold statement when you arrive at its iron-rich red beach. Just inland is a brackish lagoon where visitors frequently see flamingos, heads plunged underwater to spoon up crustaceans and algae with their bowl-like beaks.

Espanola is the southernmost island, home to the famed waved albatross, a child-sized bird with an eight-foot wingspan. According to the Galapagos Conservancy, every year the entire world's population of adult Waved Albatrosses returns to Espanola during the nesting season from April to December. "Spiritual experience" is a common descriptor.

Fernandina, the Galapagos' youngest and westernmost island is best known for its not-infrequent volcanic eruptions, the most recent of which was in 2009. It's situated at the locus of the "hot spot" that created, and is still creating and shaping, the Galapagos. As visitors step across lava flows and around the huge population of land iguanas, they gain a first-hand understanding of the geological origins of the islands.

Floreana is home to the Galapagos' famous barrel-cum-mailbox at Post Office Bay. For centuries, those visiting the famous Ecuadorian isles relied on the unspoken duty of fellow pirates and whalers to get letters to an intended destination. A mariner would leave a dispatch, then pick through the stack for missives he could personally deliver (travel schedule allowing). The tradition continues today; cruise passengers visiting the site can leave and take postcards from a (modern) barrel. 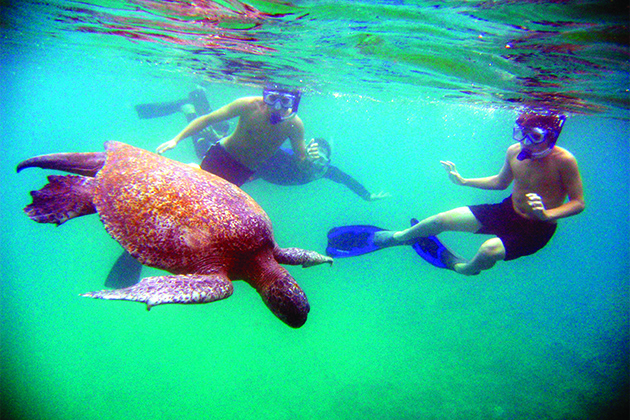 Whenever you go, there are four pillars of a successful Galapagos cruise:

1. Protection From the Sea and Weather

3. A Touch of Pre-cruise Study

4. A Means to Record the Experience

Take account of all four, and lovers of wildlife and geology are in for an unforgettable time. Here are a few tips that cover the pillars, as well as two pieces of practical info.

The Packing List: Instead of a blue blazer and oxfords, carry-on essentials include quick-dry shirts, Ziplock bags to protect equipment and a floppy hat to repel sorties from the equatorial sun. Also part of the regimen: sunblock and aloe, should cruisers forget to re-apply the first.

The wind-drawn Humboldt Current can bring with it nauseating, choppy waters from July to December, so score Dramamine. (Ships will likely carry the stuff, too.) Some passengers go with the prescription "Is that a wart behind your ear?" motion sickness patch.

The Galapagos' omnipresent lava is unforgiving. However visitors ramble, they should make sure they're properly shod. Whatever you pick -- hiking boots, rugged sandals -- ensure they're solidly built.

While pests typically don't pose much of problem during high season, bug spray will come in handy during the potentially soggy months of January to March. (There is an exception: wasps, an invasive problem in places like Post Office Bay, are a problem year-round.) Any naturalist worth his DEET will carry bug spray as part of a first aid kit.

Related: A Cruiser’s Medical Kit: Packing Prescription Drugs, OTC Medications and What to Leave at Home

Pre-Trip Research: If "Origin of Species" feels too Western Traditions 101, try "The Beak of the Finch," a nonfiction look at a pair of evolutionary biologists who watched natural selection, in real time, shape a colony of finches on a tiny island; "My Father's Island," a memoir written by a woman whose family colonized Santa Cruz in the '40s; and "Galapagos, The Islands That Changed the World," a photo-laden companion book to the BBC documentary of the same name.

Recording The Experience: Though the wildlife remains bizarrely apathetic to encroaching, camera-wielding homo sapiens, a telephoto lens can still come in handy. If you don't want to pay for a lens, like the Nikon 80 - 400 mm telephoto ($1,500+), try renting with a company like lensprotogo. If you do bring the "bazooka" and plan on switching lenses frequently, don't forget the accouterments (like a sensor cleaning kit and something to shield the lens/camera from water). A second splurge worth considering is an underwater camera or housing. If you have a popular brand of camera, there may be an exact fit case option.

Ships anchor offshore of visitor sites, and passengers are then tendered to the landing site in pangas (Zodiacs). There are two types of landings -- the wet landing and the dry landing. The wet landing might involve hopping off the panga into a foot of water. The likelihood of getting a little wet (but not drenched) is high.

Entrance Fee; $100 for Adults and $50 for Children: (plus a $10 fee for US citizens for an INGALA Transit Control Card), to visit the park. It's collected from passengers upon entry. The money is used to fund management and conservation in the islands.