You may also like
Dismiss
10 Ways to Cruise When You're Totally Broke
Can You Cruise for $100 a Day?
5 of the Best Christmas Cruises
AARP Cruises: Discounts on Travel for Seniors (and Everyone Else)
Best Months to Cruise the Mediterranean
Danube River Cruise Map
7 Ways for Seniors to Save on a Cruise
Carnival Cruise FAQ
7 Things to Know About Holiday Singles Cruises
How to Book a Suite for Less 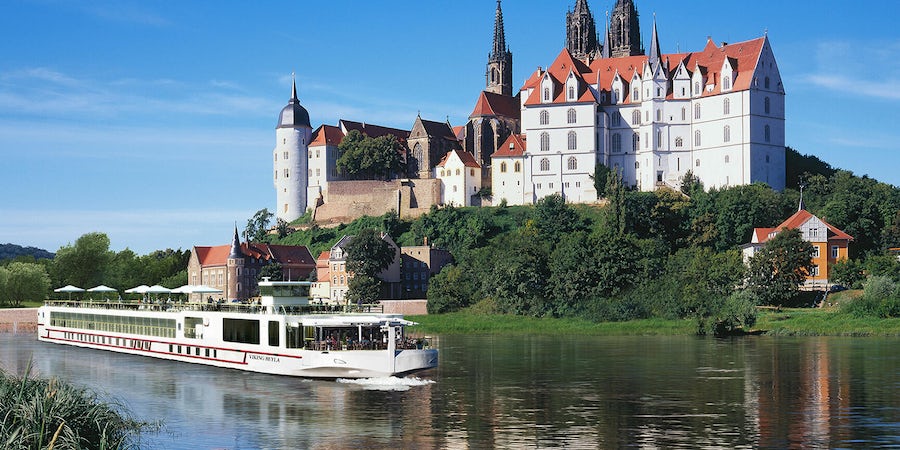 River Cruise Prices: A Primer for the First Timer

River Cruise Prices: A Primer for the First Timer (Photo: Viking River Cruises)
Melinda Crow
Contributor
River cruise prices tend to be higher than mainstream ocean cruises, though the cost can vary widely around the world. There are also distinct differences in what your river cruise price will get you depending on where you're traveling. That's why we've broken down the basics of river cruise prices from European rivers to the U.S. and other river cruising hotspots around the globe. Keep in mind that pricing can fluctuate, but all were accurate at the time of publication. Read on for our primer on river cruise prices and get inspired to plan your next cruise vacation.

Related: Choose the Right European River Cruise for You

If you're hoping to cut down your river cruise fare, look for shoulder season itineraries in late March and fall. Mid-May through late September are the most popular months for European river cruises, and sailings during that time are usually 15 to 20% more expensive, though you'll find relative summer bargains in July and August (though you might find restaurants, bars and cafes closed in some cities and towns) .

Holiday Christmas market cruises in November and December are priced lower than those during any other time of the year, offering the best deal in Europe overall -- though these are also becoming more expensive as they gain in popularity. There are no sailings in Europe in January or February.

River cruises in the U.S. can sometimes be more expensive than cruising the rivers of Europe. However, U.S. residents won't have to cough up extra for international flights or deal with passport and visa issues.

By and large, the same rules for scoring deals and prices apply in the U.S. as they do in Europe. On average, U.S. river cruise prices start around $300 to $400 per person, per night. Inclusions vary from line to line, though, and it's important to examine what the line you've chosen will offer.

American Cruise Lines' prices cover many excursions, all pre-cruise hotel accommodations, airport transfers, all meals and soft drinks, beer and wine at lunch and dinner, and complimentary evening cocktail receptions. American Queen Voyages’ (formerly American Queen Steamboat Company) prices include complimentary wine and beer with dinner, all shore excursions, bottled water and soda, and a one-night stay in a deluxe hotel in the city of embarkation. Viking’s U.S. river cruise prices on both the Mississippi and St. Lawrence include beer, wine and soda at lunch and dinner onboard, at least one shore excursion in each port, complimentary Wi-Fi and all port charges. Pre- and post-cruise hotel packages are available at an additional charge through Viking, as are air arrangements.

Nile River cruise prices aren't cheap. On average, they start between $350 and $500 per person, per night. But Nile cruises come in a variety of itineraries. You might find a tour that couples a three-day Nile River cruise with seven days based in Cairo or vice-versa.

Related: Is It Safe to Cruise the Nile River?

Tauck offers Nile river cruises, as do other lines like Viking, Avalon, Uniworld, and AmaWaterways. Peak Nile River cruise season is between October and early January, with shoulder season spanning from mid-January through early April. Booking as far in advance as possible is necessary just to get a stateroom as these cruises are popular. Low season is between May and the end of September, but expect scorching temperatures.

Keep in mind that Egypt requires a visa, which can be obtained at the Cairo airport upon arrival for $25. It's also worth noting that many Nile River cruises require a short domestic flight in Egypt between the Upper Nile and destinations like Luxor and Aswan

It's essential to do an apples-to-apples comparison with Amazon River cruises. Lindblad, Avalon and even Uniworld charter small luxury Amazon river cruise vessels that were built to navigate remote areas of the river through Delfin Amazon Cruises and Aqua Expeditions and chartered by a myriad of tour operators. These small boat Amazon river cruises spend days on the river itself.

Seabourn and Oceania offer Amazon River cruises that are two weeks or longer. However, you should note that these take in far more destinations than the river-centric tours offered by Aqua Expeditions or Delfins. They also primarily offer Amazon-region exploration via shore excursions from oceanside ports. Additionally, Aqua and Delfins offer a more immersive style of travel and an experience more akin to a proper river cruise.

Amazon cruises take place all year long, and prices are generally steady throughout the year. The best way to snag savings? Look for wave season promotions at the start of a new year.

The Yangtze, Mekong and Irrawaddy are just a few of Asia's wonderful river cruise destinations, but there are other cost-adding factors you'll need to consider here that aren't the case in Europe or the U.S. The most affordable time to cruise the rivers of Asia is between June and August, which is low season. Yangtze and Mekong River cruise tours can be had for as low as $300 per person, per night, during low season, climbing to $350 during peak travel times. Trips on the Irrawaddy in Myanmar cost about 20% more.

However, much like Nile River cruises, Asia river cruises in China, Vietnam, Cambodia and Myanmar also include a land component that's often longer than the cruise itself. For instance, a typical three- or four-night Yangtze River cruise is generally wrapped in a tour that lasts 10 or more nights.

Related: How to Find a Good Deal on a Yangtze River Cruise

Since the tour includes a lengthy land component, it's prudent when calculating the value of the fare to research the quality of the hotels and excursions included. The Mekong and Irrawaddy are still relatively new entrants when it comes to tourism development, so there are fewer choices for hotel rooms (and ships), though cities in both destinations will offer up well-known luxury brands like Sofitel and Shangri-La.

There are also other expenses to consider, like long-haul airfare and visa costs.