You may also like
Dismiss
MSC vs. Royal Caribbean in the Caribbean
MSC Seaside vs. Carnival Vista
Meraviglia Class vs. Seaside Class on MSC Cruises
Coastal Cruise Tips
Best Cruise Travel Agents
Best Cruise Ports for Fishing
9 Best Cruise Lines for Cruise & Stay Packages
How Reassuring are New Cruise Cancellation Policies Really?
Virtual Cruise Trip Report: Onboard a Cruise Critic Member's "Fake, Made Up and Completely Impossible" Cruise Itinerary
What Kind of All-Inclusive Cruises Can You Find In Alaska -- and Which One Is Right For You? 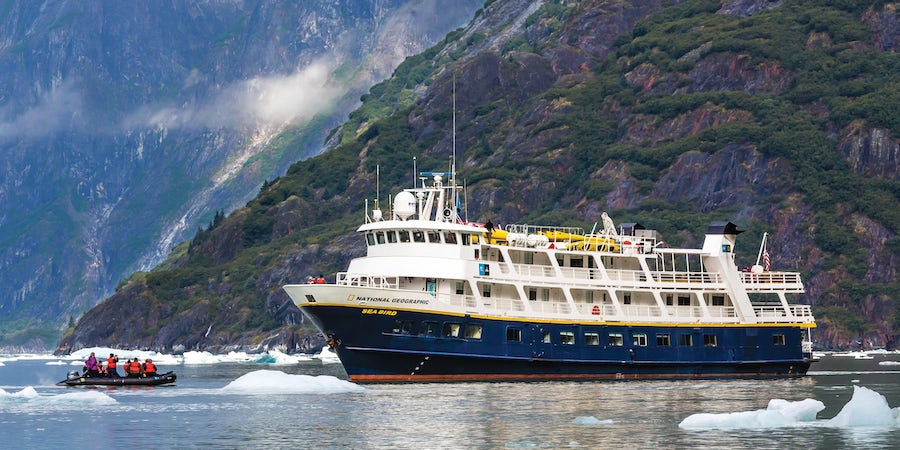 Small Ships in Alaska: A Guide to Cruising Off the Beaten Path (Photo: Lindblad Expeditions)

Small Ships in Alaska: A Guide to Cruising Off the Beaten Path

A small ship Alaska cruise is one of the most intensive ways to explore Alaska's coast. . Unlike the massive ships that ply the waters of the Gulf of Alaska and Inside Passage, small Alaska cruises can dock in isolated bays and fjords or picture-perfect small towns far from the crowded tourist trail.

Small ships in Alaska typically carry fewer than 100 passengers and have a far calmer vibe. You wake up to the sound of birds and days consist of kayaking or hiking, rather than shopping and taking helicopter tours. Evenings are spent reading in your room or listening to a naturalist talk.

UnCruise Adventures offers some of the most popular small ship cruises to Alaska. With sustainability front and center, expeditions are focused on local culture, regional cuisine and nature. The larger ships in the line feature built-in docks for kayaks and stand up paddleboards, while the smaller yacht-style ships include drinks and a spa treatment in the fare. Better yet? Drinks are free.

Related: Alaska Cruises: Everything You Need to Know for a Perfect Bucket-list Adventure

Uncruise offers one of the longest Alaska cruise seasons in the industry, with departures from April through September.

Most of UnCruise small ships in Alaska sail between Ketchikan and Juneau, between Sitka and Juneau, or round trip from Juneau, though repositioning departures from Seattle are also on offer (typically at the start and end of each season). The line generally doesn't stop in touristy ports like Skagway, and instead keeps its ships close to Alaska's wilderness, though Wrangell, Misty Fjords and Tracy Arm do feature on some itineraries.

Owned and operated by the Allen family (members of the Tlingit Kaagwaantaan clan), Alaskan Dream Cruises specializes in voyages that have strong focus on community and culture.

Related: 6 Things You Need to Know About Alaska Cruise Tours

With the exception of the smaller vessels, each ship has lounges for happy hours, as well as post-dinner lectures and programs.

Larger cities like Ketchikan, Skagway and Haines, as well as Thorne Bay, Kasaan, Wrangell, Gustavus and Glacier Bay will feature on Alaska Dream Cruises itineraries. Expect historical walking tours and cultural experiences in towns, while hiking and wildlife viewing are on offer in more natural ports. Land extensions to Denali are available.

Lindblad pioneered the expedition cruise several decades ago and has partnered with National Geographic since 2004,. It remains a leader in the field and is a great option for small ship Alaska cruises that put landscapes and wildlife front and center. There aren’t just one or two naturalists onboard Lindblad cruises, but four or five. Plus, many of the line's itineraries feature a team of professional photographers onboard to help you snap the best possible shots.

Related: The Best Time to Cruise Alaska Month by Month

Lindblad's Alaska ships are known for being family-friendly, with more children onboard than similar small ships. Discounts are offered and programming is spot-on. (Although this type of vacation isn't a good choice for kids who need their electronics; you're out of signal range the majority of the time.)

From just six days to more than two weeks, Lindblad has a unique mix of itineraries, including stops like Juneau, Ketchikan, Glacier Bay, Alert Bay, Haida Gwai, Katmai, Kodiak and Lindblad's signature stop in the Inian Islands, where wildlife is rich.

American Cruise Lines small ship sailings in Alaska include itineraries through the Inside Passage and Southeast Alaska. The line has traditionally drawn an older crowd more interested in ports than adventure, and its Alaska sailings are heavy on narrated boat, coach and walking tours.

Related: Alaska on a Budget

American Constellation, built in 2017, carries 175 passengers and most of its staterooms have private balconies. Rooms range from 226 to 450 square feet -- they're billed as being among the largest in Alaska. There's elevator service to all decks, which is a great feature for those with mobility issues.

Round trip sailings out of Juneau, or between Juneau and Seattle, generally include stops in Glacier Bay, Icy Strait Point, Petersburg, Sitka and Tracy Arm.

Michael McIntosh started The Boat Company in 1979 as a nonprofit educational organization. What does that mean? A portion of the fare is tax deductible, and your trip will have a strong emphasis on conservation, as all after-cost proceeds go to supporting conservation efforts in Southeast Alaska.

The Washington-based company has two small ships: the 24-passenger Mist Cove and 20-passenger Liseron. Both come with fishing equipment, so put The Boat Company on top of your list if you’re an avid angler.

Cleaning, packing and freezing your fish is included in the cruise price and past passengers report that chefs will cook your catch. (Orvis, the fly-fishing outfitter, occasionally sponsors trips.)

An open bar, all shore tours, hotel accommodations and airport transfers are included in the price. The ships cruise between Sitka and Juneau, stopping for nature activities at places like Admiralty and Brothers Islands, with glacier-viewing at Tracy or Endicott Arms along the way. There are no traditional port calls on these cruises; your time is almost entirely spent on the water, with stops for hiking, wildlife-viewing and from-land fishing.

Since 1986, Maple Leaf has been operating sailing cruises in British Columbia, Haida Gwaii (the former Queen Charlotte Islands) and the Inside Passage. On Maple Leaf's fleet of three vessels, expect an even more intimate experience than on a regular small ship, and a program that is full of First Nations history.

The 92-foot-long Maple Leaf schooner can carry eight passengers and four or five crewmembers. Instead of cabins, a sleeping area has large bunks with walls on two and a half sides and thick, heavy curtains on the rest. Bathrooms are shared. The ship has two inflatable boats for shore excursions and wildlife-viewing.

Swell, a unique 88-foot converted tugboat built in 1912, carries up to 12 guests in six private en-suite cabins. The classic wooden construction of the vessel has been maintained, and cabins are paneled with wood. There is a hot tub on the aft deck, and a cozy lounge that doubles as a dining area.

Related: Small Ship vs. Big Cruise in Alaska: Which Is Right for You?

Cascadia is Maple Leaf's newest acquisition, a 24-passenger catamaran with a crew of 10, offering a dozen cabins. The ship is 138 feet in length, with a lounge, terrace, dining area and open bridge policy, as well as kayaks for passenger use.

On the line's 10-day Alaska Supervoyage itineraries, Swell travels between Prince Rupert (British Columbia) and Sitka, and between Sitka and Ketchikan, with stops at Baranof, Kruzof and St. Lazaria islands. Maple Leaf has a permit to bring its cruisers to the Pack Creek bear-viewing area on Admiralty Island. Maple Leaf also offers eight-night Inside Passage voyages between Petersburg and Sitka, and between Petersburg and Prince Rupert.

American Queen Voyages started Alaska expedition cruises on its small ship Ocean Victory. The 186-passenger ship sails on 12 and 13-day cruises through Alaska's Inside Passage, from Vancouver to Sitka or vice versa. Ports tend toward Alaska's small towns, including Wrangell and Petersburg.

More important than the port towns are the natural wonders that you'll see along the way. Endicott Arm and Tracy Arm are magnificent glaciers, particularly when seen as close as a small ship can take you. While passengers on large cruise ships can go to Misty Fjords on an excursion, the National Monument is more stunning when you wake up in the park itself.

The ship itself is a stunner, with dedicated observation areas both indoors and outdoors to view wildlife, mountains and glaciers. The majority of the cabins have balconies -- either full or French. There's an infinity pool at the back of the ship for those rare sunny Alaska days and -- rare for a small expedition ship in the region -- a small spa, fitness center, three bars and two dining areas.

Fares on Ocean Victory include transfers, a one-night pre-cruise hotel stay, transfer to the ship, unlimited Wi-Fi (when it works; this can be iffy in remote Alaska) as well as dining and beverages and most shore excursions.