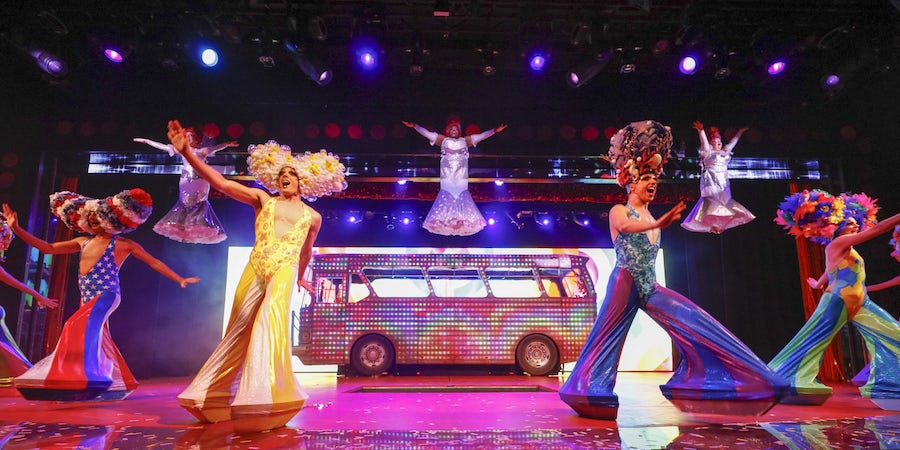 8 Best Cruise Lines for Onboard Entertainment

While some cruise lines stick to the old entertainment standards, such as musical revues and poolside bands, others have taken cruise ship entertainment to another level by offering unique and creative shows and performance spaces. They provide multiple entertainment options for every kind of cruise traveler, whether that's rock concerts, aerial shows, big-name lecturers, Minnie Mouse meet 'n' greets or performances by Julliard-trained musicians.

Our top cruise lines for onboard entertainment combine longstanding favorites with some impressive trendsetting. For more on the trends themselves, see our story, Trends in Cruise Ship Evening Entertainment.

Why: Carnival's "Fun Ships" are your best bet if you're looking for a variety of live music performances, elaborate and splashy production shows and top-rated comedy acts. Carnival's music-driven Playlist Productions, found aboard more than half of the line's 24-ship fleet, uses LED screens and assorted special effects to enhance the singing and dancing onstage. Three to four different stage shows are performed aboard each Playlist Productions-equipped ship, with themes such as Motown and R&B and rock-inspired piano tunes.

Speaking of piano music, Carnival's piano bars are a popular musical attraction available fleetwide (especially for those who enjoy sing-alongs), and many ships feature live musical performances in casino bars and in the atrium. If you prefer comedy to music, check out the nightly Punchliner Comedy Club fleetwide, which puts on early-evening family-friendly shows and later adults-only comedy sets.

You'll find the Las Vegas-favorite "Legends in Concert" on Norwegian Pearl, and several ships in the fleet feature a sizzling Latin and ballroom dance team in "Burn the Floor." On Norwegian, shows even take place during mealtime with the "Cirque Dreams" dinner show. It's an interactive entertainment-and-dining experience that intersperses dinner courses with music, aerial performances and acrobatic feats on Norwegian Epic and Norwegian Breakaway.

Why: Disney Cruise Line knows how to entertain kids of all ages. After all, it benefits from the collected wisdom of the entire Disney corporation. From big production shows to Disney character interactions with starstruck kids at breakfast and tea time, the line does its utmost to keep everyone happy on vacation.

Related: Where to Find Your Favorite Characters on a Cruise

Kids can start the day off right with character breakfasts -- or, later, afternoon teas -- where they can share a laugh with Goofy or a hug with Snow White. Come dinner time, several of the restaurants -- including Animator's Palate, Tiana's Place and Rapunzel's Royal Table -- offer mealtime shows as well.

At night, Disney film favorites are brought to life on shipboard stages in kid-friendly 45- to 60-minute Broadway-style performances. You'll find longtime favorites, such as "Beauty and the Beast," as well as new hits like "Frozen, a Musical Spectacular." Other production shows feature song highlights from a mix of favorite Disney movies.

More informal but no less fun: On one night each cruise, Disney launches an all-out deck party (either themed on pirates, "Star Wars," "Marvel" or the film "Frozen"), complete with an interactive musical show, dance parties and at-sea fireworks. Adult cruisers are not forgotten and can delight in newly released Disney (and Marvel) movies on the big screen in the theater or pool deck, and enjoy adult-focused entertainment in the nightlife districts aboard all four ships.

Why: Royal Caribbean has long been at the forefront of innovative cruise ship entertainment, introducing unique offerings never before seen at sea on its new ships over the years. It's the first (and only) line to offer ice skating shows in an onboard rink (on select ships) and water-based acrobatic shows in a pool-based stage area (on Oasis-class ships).

Plus, it's brought Broadway (or London West End) to the high seas with shows like "Momma Mia" (Allure of the Seas), "Grease," (Independence of the Seas and Harmony of the Seas) and "Hairspray" (Symphony of the Seas). On Anthem of the Seas, the expansive Two70 entertainment venue -- a multimedia theater that combines virtual concerts, robotics, aerial shows and video projection -- provides technology-enhanced spectacles like "Spectra's Cabaret."

For comedy lovers, Allure of the Seas' Comedy LIVE venue hosts two headliner comedians with sets inspired by NYC's stand-up clubs, while The Attic on Harmony and Symphony of the Seas offers late-night comedy shows for adults. Royal Caribbean has also expanded vertically with the transformation of the popular Centrum areas aboard Vision-class ships into chic bars and performance spaces, which feature dazzling acrobatic displays that take place in the air above the audience.

Why: Cunard takes a more upper-crust approach to entertainment and succeeds with some unique offerings. Think longstanding partnerships with the National Symphony Orchestra, the Royal Academy of Dramatic Art (RADA) and the Juilliard Jazz School. For example, London's acclaimed RADA sends graduates and staff aboard Queen Mary 2's transatlantic crossings to put on a variety of performances, including hourlong renditions of Shakespearean works like "A Merchant of Venice," "Richard III" and "Romeo and Juliet."

Also noteworthy is Queen Mary 2's planetarium, the setting for several space shows produced in partnership with the American Museum of Natural History's Hayden Planetarium, narrated by the likes of Tom Hanks and Robert Redford.

Why: The luxury line offers first-string entertainment onboard its two midsize ships, with a nice array of shows and concerts ranging from the traditional to the trendy. Broadway-style productions, for instance, are performed by Crystal's talented onboard ensemble of singers and dancers -- and accompanied by a live orchestra. Additional performances include concert-style tributes to artists such as Elton John, musical-style "nostalgic" shows with themes like "Route 66" or "The Speakeasy" and dance performances. The line's "Crystal on Broadway" program brings aboard Broadway performers for one-off shows and Q&As. ILuminate, a pantomime group that appeared on "America's Got Talent," performs shows such as "The Tourist" and "Imagine," spectacles of music and neon lights dancing in the dark.

Sailings always have musicians onboard, from classical violinists to a cappella performers. Dance floors are regularly attended by live bands, too, and live classical music accompanies daily teatime. Many Crystal sailings feature a headliner comedian, ventriloquist or magician (from the famed Magic Castle).

Why: Holland America upped its entertainment game with a trio of impressive partnerships that bring world-class entertainment to its Music Walk complex on every night of every sailing on select ships. The shows include classical music in conjunction with Lincoln Center Stage and Memphis-style blues courtesy of B.B. King's Blues Club. Plus, passengers can enjoy popular hits played by dueling pianos, thanks to a partnership with Billboard.

On Koningsdam and Nieuw Statendam specifically, the cruise line has made great use of technology to bring the quality of its theater productions up a notch. The ship's two-story World Stage has a 270-degree LED projection screen that lends energy and light to stage shows.

Why: Princess Cruises partnered with three-time Oscar-winning composer Stephen Schwartz -- known for musicals such as "Wicked," "Pippin" and "Godspell" -- in 2015 to create production shows exclusively for the cruise line. So far, three shows have been rolled out, including one -- "The Secret Silk" -- that uses life-size puppetry from the famed Jim Henson's Creature Shop.

Related: 6 Reasons to Go on a Ruby Princess Cruise

All Princess ships feature "The Voice of the Ocean," an at-sea version of "The Voice" TV show, in which passengers audition to compete in an end-of-sailing grand finale; you'll even find the iconic rotating chairs at this officially licensed show. Also on all ships are guest acts that might include comedians, magicians and live music acts.