You may also like
Dismiss
New Cruise Ships on Order
What Is a Cruise Dance Host?
New Luxury Cruise Ships on Order
Virgin Voyages Founder Richard Branson Talks Fleet Expansion, Disrupting Cruise and Working With J-Lo
Will the Alaska Labor Shortage Affect Your 2022 Cruise? Probably. Here's How to Cope
Cruising on a Queen Mary 2 Crossing of the Atlantic: Why Sea Days Aren't Boring with Cunard
The Greatest Generations Foundation: Just Back From a Cunard Cruise with Veterans
Cruising with Cunard: Is Queen Mary 2 One of the Best Places to Work Remotely?
Cunard Dress Code: Is There Still an Appetite for Formal Wear on a Cruise?
What to Pack for a Cunard Cruise aboard Queen Mary 2 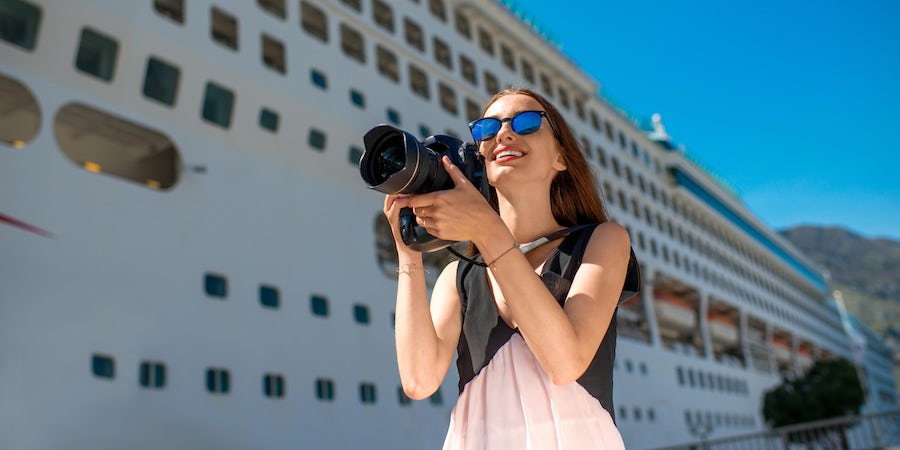 9 Tips for Taking Better Pictures on Your Next Cruise (Photo: RossHelen/Shutterstock.com)

9 Tips for Taking Better Pictures on Your Next Cruise

In third grade, the "Shipshooter" became obsessed with drawing clipper ships on his school notebook. Eight-hundred-fifty New York Times photo gigs, one bone-crunching run-in with an industrial camera-kite and a fleet of six high-end camera drones later, he's one of the most acclaimed ship snappers in the industry.

Jonathan Atkin started shooting cruise ships professionally in the 1980s -- long before the days of at-sea carousels, 300-foot-long water slides and your choice of steakhouse, Asian fusion venue or French bistro. He photographed by boat, helicopter and, yes, military kite (more on that later). A reverence for the crew and ships -- i.e., the Seafaring Life -- is what made him one of a handful of go-to photogs for the new ships/inaugural trips beat. "[Cruising] is a brilliant and powerful experience, and I'm passionate about showing that," explains Atkin, who's been at sea since age 19 when he landed a job on a transatlantic bulk carrier.

Remember to consider that this is your cruise. Rather than taking the shot that everyone's fighting over, like the gaggle of tourists jockeying for space in front of the Venus de Milo, opt for photos that reflect your experience. Shoot the cabin steward delivering your early-morning coffee or focus on the bowl of fruit or Champagne with glasses that you get as a past passenger. "That's a nice moment," says Atkin, and it's something that will make the retelling more exciting.

Cruise ships are compartmental, which can make getting everything into an interior shot -- think cabins -- frustrating. "Cruise cabins have three sets of doors -- hallways, balcony, bathroom." The answer? Move.

Get outside of the cabin, get into the corner, put your camera up toward the ceiling for more of a diagonal look," says Atkin. "Think actively about ways to un-confine yourself from the physical space." More generally to the issue of space, "if all your photos telegraph your body height from the deck to your eyeballs," says Atkin, "then you've ignored all the space between your toes and your head!" In other words, your altitude alone can add spice to your photos. "Cruise ships are filled with varying levels, indoors and out. Go down to deck level or stand up on a stair to shoot."

"The best light, particularly in the Caribbean, is early morning and late afternoon, i.e., the 'magic hour' just before sunrise or sunset," says Atkin. "Good pictures still, no matter what digital whizbangs we have, depend on exciting light." 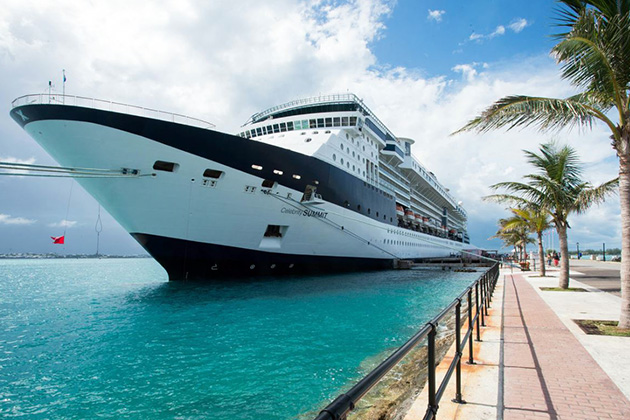 Like faces, all ships have a more photogenic side, says Atkin. But there's no hard and fast rule to finding that "sweet spot." Feel around, rely on your own instincts. "Look at a ship as an organism, poetry in steel," he says. For Atkin, when you treat the subject with awe, that feeling is transmitted, almost by osmosis, into the shots.

5. Prove to people you're on a cruise ship.

An onboard lounge may make for a pretty picture, but doing something as simple as including a few unique-to-cruise elements in the mix will add depth to the collection. Atkin likes framing cruise-related shots with things like muster station or "no tugs" signage, or taking a ship/sea shot with the "seven laps equals a mile" posting.

"Photography is about capturing a quintessential moment -- an image that stands on its own -- that's why pros shoot so many images," says Atkin. It takes hundreds if not thousands of shots to get just one good one. If you have a good flash card -- and a point-and-shoot with a low lag-time between the click of the button and the snap of the shutter -- you can get into a bit of rapid fire photography. Conversely, you can also spend the time it would take to shoot 20 pictures to look for that one moment. "Be ruthless ... and specific," says Atkin.

Taking a clear photo is often a practice in stoicism. "Always avoid holding the camera away from your face," says Atkin. "You simply cannot hold a camera steady that way." You can use nature's tripod -- your nose -- or opt for a third party if you have a twitchy beak.

There are several low-cost devices on the market that screw into point-and-shoot cameras -- most commonly, the Gorillapod, a flexible tripod that can be twisted in a variety of ways for secure mounting.

8. Get creative with your gear. 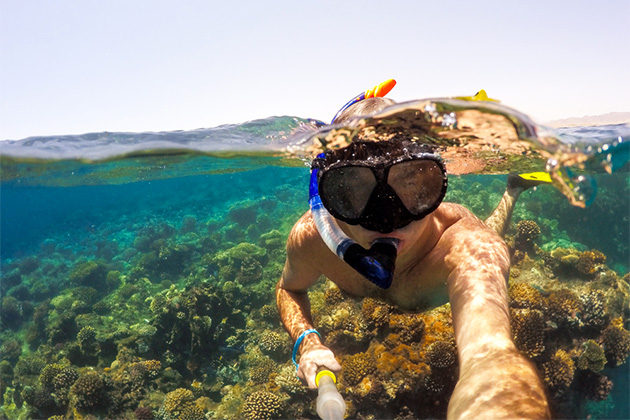 Atkin explains: "I always tried to find a different way of shooting ships. I had an assignment on Cunard's now-retired Queen Elizabeth 2, so I practiced for two months with an industrial military-style kite on which I suspended a camera. So, I took it on QE2 with approval from legendary Cunard master, Captain Wright and launched it from the helipad. I took a bunch of overheads from 400 feet up, then reeled it in so I could launch it from a different perspective. Anyway, I got it up again ... when the wind stiffened unexpectedly ... and all of a sudden a 30-knot gust took the device out of control. Soon the braking mechanism began to smoke and fire was pouring forth. In the process of frantically trying to stop it, I fractured my wrist. The rogue kite couldn't be stopped, so we had to cut the line. They set my wrist in sick bay, and later that night, a formal evening, a steward came to my room to tie on my bow-tie ('No clip-ons, sir. This is Cunard.') The pictures weren't the greatest, but 'because of what I went through' -- on Friday the 13th while cruising the Bermuda triangle, no less -- the Times ran the kite shots."

Although cruise lines prohibit passengers from bringing kites and drones onboard, there are plenty of other unique ways to shoot cruise ships. One of the most popular is with a GoPro. These small, compact devices are designed to capture high-quality action footage, including under water.

Another toy you might want to consider incorporating into your photography routine is the selfie stick, an adjustable-extension rod that can be attached to your camera, GoPro or phone. Selfie sticks are especially useful for taking pictures from hard-to-reach areas -- such as capturing a side view of the ship from your balcony. They're also great for high overhead shots, worm's-eye views or other unique angles. Just remember to use them respectfully in public settings, so you don't obstruct anyone else's view.

While these tips are sure to help you become a better photographer, Atkin says the most important rule of all is being comfortable with your camera. He cautions: "Don't buy a camera the day before you leave for a cruise." You need to give yourself time to get comfortable with it, familiarize yourself with the mechanics and take practice shots in various environments to get a feel for settings such as the aperture and shutter speed. A little practice can go a long way, especially if you want to use manual modes and different lenses.