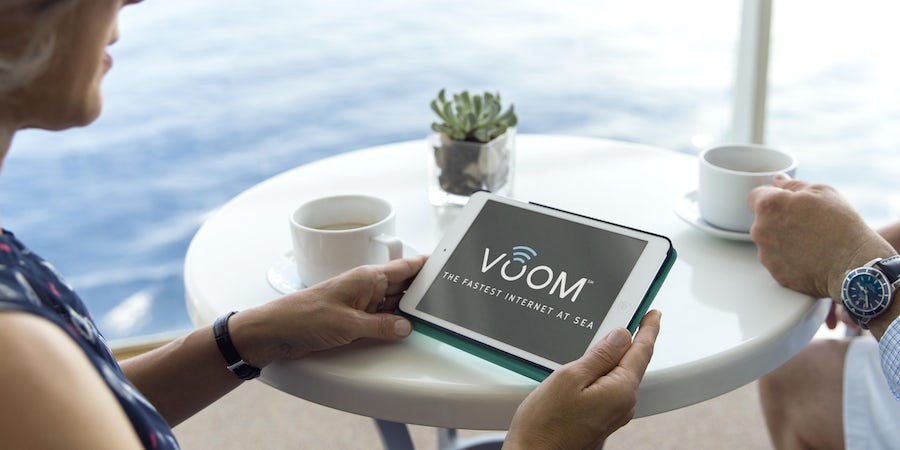 Do Cruise Ships Have Wi-Fi? And 6 Other Things You Need to Know About Internet at Sea

Internet on cruise ships has come a long way, but can still be a source of frustration and confusion for those about to sail. If you're willing to pay a premium, most mainstream cruise lines offer a solid Wi-Fi connection on cruises, including Royal Caribbean and Norwegian. The internet situation has drastically improved on ships in recent years, though how far at sea you are will play a part in how strong your signal is and some ships and lines still provide spotty, slow service.

From the most basic questions, like "How does Wi-Fi work on cruise ships?" to whether you can stream Netflix and how to save some money, there's plenty to know about cruise Wi-Fi before you board. Read on for Cruise Critics best internet-at-sea tips and answers to frequent questions so you can stay connected on your cruise vacation.

1. Will I Be Able to Connect to the Internet on My Cruise Ship and What Connection Should I Expect?

Most cruise ships provide internet, apart from a handful of very basic expedition ships in off-the-beaten-track locales. Baseline connections are fine for checking email, posting to social media and checking in for your flight. Some lines have enough Wi-Fi power or land-hugging itineraries that will allow you to make video calls and use online programs.

Related: What to Expect on a Cruise: Using a Cell Phone

Internet on cruise ships is provided primarily by satellites, though some cruise ships have technology onboard that allows them to switch to land-based signal towers when sailing within a certain distance from land. Because satellite service can be spotty, cruise ships do not guarantee that you will always have connectivity.

The satellites used for at-sea internet connections cost hundreds of millions of dollars. A single cruise line can't afford to launch a satellite. Instead, they team up with maritime communications companies that rent large amounts of bandwidth to cruise companies. With that in mind, yes, internet on a cruise often costs a pretty penny.

However, there are exceptions. Prices are being driven down as some cruise lines (the Carnival family of brands, for instance) begin to use hybrid systems that combine satellite connections with cheaper land-based links. For instance, Carnival offers passengers a cheap social media package Wi-Fi option in addition to their full-power internet packages. If you need video calls or streaming services, you'll need to pay more.

Full day pricing is the norm these days, but you aren’t locked into buying Wi-Fi for the full cruise. If you won’t need to connect during the first few days of your cruise, don’t buy the advanced purchase package. Simply wait and buy onboard when you actually need it. If you have to pay for Wi-Fi on your cruise by the amount you use, 10 MBs will give you about 30 minutes on Facebook, four minutes of Skype or three photo uploads.

3. Satellite Internet on Cruise Ships Won't Be as Reliable As Your Broadband at Home

Satellite internet at sea is not as reliable as on-land connections. That's true in almost every circumstance. To understand why shipboard internet isn't comparable to the broadband you enjoy at home, you first need to understand the technology behind it. The big golf ball-shaped domes visible on top of cruise ships are protective shells that encase freely moving satellite antennae. These antennas transmit a signal from the ship to a satellite, which then sends a signal back down to earth.

Maritime communication companies have sped up this process, which used to take a long time, through various means including adding more satellites, increasing the bandwidth that can be sent during each transmission and linking up with land-based towers when sailing closer to shore.

But the biggest limitation to reliability continues to be a clear path between the ship and the satellite. All the data being sent from the ship to the satellite and back (for example, pages loading on a browser) has to traverse this pathway. In order for there to be a connection, the antenna needs to be pointing at, and have an unobstructed line of sight to, the satellite.

Related: 9 Tips for Getting a Last-Minute Cruise Deal

Furthermore, when the ship has to change course quickly, it's common for the signal to be temporarily lost. Barring any obstructions, you can still get an internet signal down in Antarctica and as far as 80 degrees north latitude in Svalbard.

Congestion within the path also can be a problem. As more people are on their computers or cell phones requiring data, congestion can build up and passengers could notice slower speeds.

Interestingly, river boats (many of which offer free internet) continue to offer a particularly frustrating online experience, if only because of heightened expectations. Being so close to civilization, you'd think there should be a quicker connection. However, hills or mountains in the river valleys often block satellite connections, so river ships must use cellular for their primary internet connection. When the ship is near a cell phone tower, newer 3G or 4G service can provide faster service than what can be delivered through satellite. The disadvantage comes in areas with a lack of cell towers, where the cell signal is weaker and the connection speed slower.

4. Need the Fastest Possible Cruise Wi-Fi? Head to the Caribbean.

While internet coverage on ship's worldwide is improving, Wi-Fi is generally the strongest on cruises in the Caribbean. With so many ships visiting the region, maritime communication company SES Networks has placed several satellites in medium orbit above the area in order to create the maximum possible coverage, or footprint. (The company has medium orbit satellites around the world as well.)

Because the signal is strongest in the center of a satellite footprint and weakest as the edges are approached, MTN Communications has created a method to keep its satellite aimed at ships in the Caribbean as they move. In that way, the ships stay within the satellite's footprint for most of their sailings.

5. But What If I Need to Reliably Get Online During My Cruise?

For the fastest internet connection on cruise ships, try to log on when few other people are likely to be online, such as late at night or in port when most passengers are ashore. The first is especially important while sailing far out to sea. The more people online sharing limited bandwidth, the slower the connection. You can also try saving the bulk of your internet usage for times when you're nearest land.

Unfortunately, there isn't much else an individual cruiser can do. Users won't find much difference between connecting via Wi-Fi at the ship's internet center versus other locations on the ship.

Related: Can You Work From a Cruise Ship?

Of course, the fastest -- and cheapest -- connection will always be onshore, and for those with heavy internet needs, using Wi-Fi or cell service travel plans in port may be the best route. Check with your cell service provider before taking this route, though, as roaming and international charges can be steep if they aren't included in your regular plan or as part of a supplementary plan.

Another useful tip is to simply write your email in a word processing program or an offline version of your email provider, and then paste what you've written into an email (or hit send) as soon as you log in. It's best to have your own laptop if you want to take this approach, as many onboard computer terminals have been re-jiggered so you cannot access basic word processing programs like Microsoft Word or Notepad. This won't change your connection speed, but it may save you money and time.

6. If You Want to Stream or Have a Video Call, You'll Need to Pay More

As we've said, if you absolutely need to stream TV or have a video call at sea, you'll need to shell out for your ship's most powerful internet plan. However, depending on how many people are using it and any blockages to the satellite signal, you still shouldn't expect streaming shows and video calls to happen with the same quality as they do at home.

7. Turn Your Cell Phone Data Off at Sea to Save Money

If you plan to buy a Wi-Fi plan onboard, or even if you simply want to use the smartphone apps many cruise lines offer, put your phone in airplane mode, but with Wi-Fi turned on. Otherwise calls and text messages to your phone can rack up expensive charges very quickly. You are essentially billed by two companies. The satellite provider sets up a mini-cell tower on the ship and charges for the transmission that takes your voice and sends it to the satellite and back down to land. In addition, your cell phone provider (AT&T, Verizon, etc.) also charges a roaming rate. While you don't see a separate line in your bill from the satellite provider, rest assured it is getting a cut.

Related: Is Cunard's QM2 a Good Ship for Working Remotely?

AT&T’s Cruise Package is an option for AT&T customers who need to make a few calls while onboard, or who primarily text to stay in touch with things at home. For $50 for a full 30 days, customers get 50 minutes and unlimited texts while cruising on select ships. It’s at least worth checking into. It might even allow you to skip the Wi-Fi on board entirely in some cases.